Thiel: What Seahawks’ Wilson is, and isn’t

The midseason firing of Harvin, along with the absence of explanation, makes it open season on Seahawks. Russell Wilson is not black enough? Really? 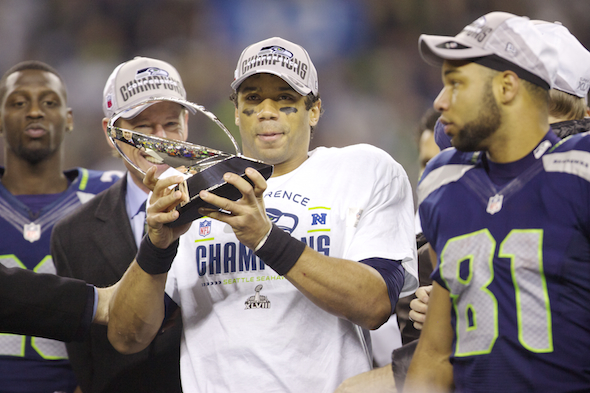 According to a story on Bleacher Report, unidentified Seahawks are said to believe that QB Russell Wilson isn’t black enough. It is a description that some others have flung at President Obama, Attorney General Eric Holder, astrophysicist Neil DeGrasse Tyson, retired QB Donovan McNabb and late tennis pro Arthur Ashe, among others.

The claim is yet another flaw that must be added to the grievances charged against Wilson:

I’m not really qualified to judge the merits of these claims because I’m inexperienced in all, especially the black part, so I defer to others.

I am, however, qualified to read. And I read Sunday that Wilson became the first quarterback in NFL history to throw for 300 yards and rush for 100 yards in the same game. That struck me as somewhat significant in football.

True, the Seahawks lost in St. Louis to the Rams, 28-26, so I added the reason for the loss to the list of grievances:

Failure to play on special teams.

So there you have it — how to go from Super Bowl champion to whale poop in three defeats.

Speaking of excrement, that’s my description for what sportswriter Mike Freeman wrote in his story that said in part, “A Seahawks player said the biggest reason the team traded the wide receiver was his increasing animosity toward Wilson. The player said Harvin was an accelerant in a locker room that was quickly dividing between Wilson and anti-Wilson.”

While I can’t dismiss the claim that a Seahawk may have said that, I can dismiss the story when an inflammatory remark is not on the record with an identified source. Particularly when Freeman used the quote to launch his speculation on an aspect of racial stereotyping that is vaguely analogous to a cocktail recipe, but far less tasty:

There is also an element of race that needs to be discussed. My feeling on this—and it’s backed up by several interviews with Seahawks players—is that some of the black players think Wilson isn’t black enough.

This, again, was similar to the situation with McNabb. And this, again, will be denied by Seattle people. But there is an element of this.

Having lit the fire, Freeman then walks away, as would an arsonist, with three final paragraphs that included minimal discussion of the subject upon which he invited discussion.

What “element”? Which Seahawk? What discussion? And is there a better example in the past week of click-bait?

More laughable was the claim by the anonymous Seahawks that Wilson was too close to the front office, a claim Freeman conflates by offering his own disdainful opinion: “How anyone can have a problem with Wilson — one of the best players in the sport and one of its best citizens — is unfathomable to me, but that’s the case.”

Do you know how many NFL owners would lick latrines for a month to get a GM, coach and quarterback to have a singularity of mind and purpose as Seattle has had? In case you are scoring at home: The other 31. General agreement on the operational mission is as vital to NFL success as it is difficult to achieve. Or else we have (or had) Mike Shanahan vs. Robert Griffin III in Washington.

Quarterbacks are the heart of an NFL operation, and they better be tightly aligned with the head.

While giving the Freeman story more attention runs the risk of further distributing the toxin of piffle, it is illuminating on two counts regarding the degree of difficulty in repeating as titlist: This is the kind of distraction that is typical of the demons visited upon the champ, and the story is among the unintended consequences of detonating the Harvin deal in midseason while failing to be direct about the rationale.

In the absence of forensic evidence — e.g., an Ali-vs.-Liston-style photo of Harvin standing over the prone Golden Tate the day before the Super Bowl — there is probably no good way to handle the firing of a high-profile employee in a high-profile industry. But within two hours of the news of the trade Friday, the world knew of the fight with Tate and the fight with Doug Baldwin, as well as Harvin’s insubordination in the Dallas game. Since none of it had been disclosed previously, there can be only one source — the Seahawks. Anonymously.

So the Seahawks would be wise to lay off castigating Freeman for his use of anonymous sources. It’s best left to others.

As for Wilson, he predictably dismissed in his weekly press chat Thursday any fracture between him and Harvin.

“Percy and I never had differences,” he said. “We had a lot of similarities, probably if anything. We’re guys who want to compete at the highest level, want to win every single time we step on the field, want the ball in our hands to make the big play and everything.

“I’m not sure why the media chose to blow everything out of proportion. It’s part of it, I guess.”

Since, as senior editor of the infant Players’ Tribune, Wilson is new to publishing, here is an explainer: Your bosses gambled extravagantly on Harvin and made national news, lost in a big way and made national news, and because the Seahawks have so far chosen not to be honest, they will be subject to national speculation. Especially after consecutive losses by the defending champs.

The Seahawks have reasons for not denigrating a player on another team. But after their leaks, that fig leaf is a little tattered. A win Sunday will help swath the loins with better cover.

Regarding what may matter for Seahawks fans in this imbroglio, Wilson maintained no fissures are apparent to him in the locker room.

“There’s no division in our locker room, there’s none at all,” he said. “If anything, I think we’ve continued to build, continued to grow. I truly believe that. Every morning when we wake up, we’re looking for one common goal, that’s to win football games.”

In the absence of evidence that Wilson is insufficiently black or insufferably Christian, too short or too tight with the bosses, Seahawks fans hope for one thing: That he is right.

And besides that 300/100 thingy, they ask: Will you play special teams too?