After taking many punches, literal as well as figurative, from the Galaxy, the Sounders had two late scores from Marco Pappa to win the franchise’s first Supporters’ Shield. 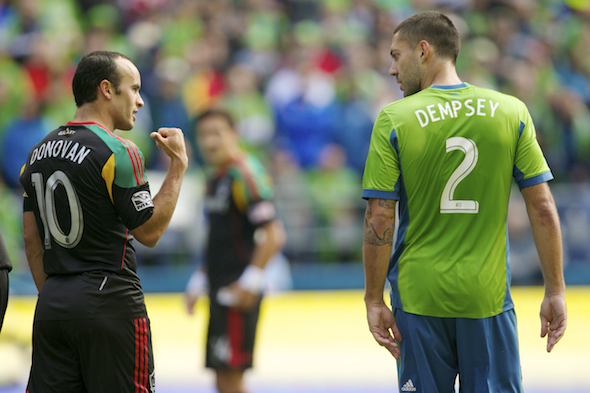 Landon Donovan and Clint Dempsey, USMNT teammates and two of the all-time greats in American soccer, had themselves a chippy day Saturday at the Clink. / Drew Sellers, Sportspress Northwest

The Sounders Saturday afternoon accomplished the hardest feat in team sports: They met high expectations. That may not sound glamorous, but in a sports culture that reveres parity, delivering on big promises after big investment is a rare deed. As the 2013 Seahawks demonstrated.

Even more rare is Seattle seeing it happen to its teams twice in a calendar year. Judging by the eruption among 57,673 at the Clink when Marco Pappa in the 85th minute broke a scoreless deadlock against the all-elbows-and-knees Los Angeles Galaxy, an appreciation similar to the Twelves is underway.

Armed with two of the sport’s premier players and supported by the most riotous fan base, times two, in the industry, the Sounders should have done well in 2014. They have.

The 2-0 triumph gave the Sounders (20-10-4) the first Supporters’ Shield in their six-year history, homefield advantage through the playoffs, first 20-win season since MLS quit deciding games with shootouts in 2000, and perhaps as important, nee-ner, nee-ner rights over the imperial, nettlesome Galaxy (17-7-10).

The Sounders drew 2-2 a week ago in LA, then rope-a-doped the Galaxy until dropping the Pappa hammer twice in the final 10 minutes.

It was the biggest milestone win in franchise history.

In the rest of the soccer world that somehow manages to dismiss the postseason playoff system — in America, as you know, 162 games in a year is just not enough — the Supporters’ Shield for the best season record is the gold standard. DeAndre Yedlin, a 21-year-old, born-and-raised ‘Merkin from Seattle, agrees.

“For me, this award is more impressive than MLS Cup,” said the Sounders defender. “This is an award over eight months, not three weeks.”

But as Seattle fans know who were around for another analogous sports experience, the 2001 Mariners who produced a jaw-dropping 116 wins, the regular season counted from bupkus. That season was one of the great feats in baseball history, but is barely an asterisk in the national sports consciousness because the Mariners didn’t even make the World Series, much less win it.

So MLS bent soccer to the American will. Playoffs will go on another five weeks until the Cup championship Dec. 7. Dempsey, Yedlin’s teammate with the Sounders and the national team, shakes his head too.

In his accounting of hardware, Dempsey included the U.S. Open Cup won last month. A sweep of the third available trophy, the MLS Cup, has never been done in a single season. In fact, only six of 18 Supporters’ Shield winners have won the MLS Cup. So as it is with all sports that have playoffs, the best record is no indicator of a championship.

Another virtue from Saturday is having taken a substantial Galaxy punch, literal and figurative, they came out ahead.

Knowing that a draw by the Sounders was enough for the No. 1 seed, thanks to tiebreakers, the Galaxy, missing star striker Robbie Keane (injury) and defender Omar Gonzalez (suspension), opened the game furiously. They offered up 10 fouls in the first 30 minutes and 8-0 shot advantage by the half. The Sounders strategy was plain.

“We weren’t going to give up a goal today — that was our resolve,” said coach Sigi Schmid. “A draw would be OK . . . cake without the icing. The win was icing on the cake.”

But this icing was gravel-flavored.

“It wasn’t a good game for fans,” Dempsey said. “We ground out a good result,  but all the fouling, kicking, stop-start, stop-start, there wasn’t much fluidity to the game. Credit to them that we weren’t able to play the style we wanted. But at the end of the day, quality showed.”

He wasn’t far off about the end of the day. After 84 minutes of eye-gouging, hair-pulling and turnbuckle-smashing, Obafemi Martins hustled up a free kick before the Galaxy defense was ready, sending it into the area toward Pappa, who entered in the 73rd minute for an ailing Brad Evans. He whooshed in from the left side and beat Galaxy goalkeeper Jaime Penedo to the ball and drilled it into the back right corner.

It was the second shot on goal for the Sounders, who finished 13-4 in arrears. The fourth shot, in the final minute of stoppage, was a howler. Pappa picked the pocket of Penedo from behind at the top of the box, while knocking flat the goalie. Pappa lifted the ball over a desperate defender and dribbled it into the net as the Galaxy screamed for a foul, to no avail.

“I am not going to put (the game) in the category of our best games overall,” said Schmid, “but it took on its own life.

“I think people forget we are still a young organization; we are only six years old. We have won four Open Cups and a Supporters’ Shield — that’s five trophies in six years. Salt Lake hasn’t done that, Kansas City hasn’t done that (and) the other new franchises haven’t done that. I think that is a reflection of our consistency and I hope our fans appreciate that.”

The burst sent to the margins the memory of last season’s finish, in which the Sounders, despite the ballyhooed signing of Dempsey, won one of their final 10 games in a collapse that threatened the job of Schmid and ushered in a roster purge.

“I think last year was a freakish year,” Schmid said. “Luckily I didn’t lose all my hair. It was really frustrating at the end. We were playing upside down, trying to make things work and we just couldn’t get it to change, couldn’t get it to work.”

As Dempsey put it about the contrast, “We didn’t let pressure let things get away. Even when we had a bad results — losing to Vancouver at home (1-0 Oct. 10) — we were able to right the ship.

“Today, we were smart about how we played the game.”

Now the Sounders have proof they are the best in MLS. They just have to prove it all over again. It’s the American way.

The Sounders won’t know their opponent or the date of the first playoff game because the regular season won’t end until Sunday. The top-seeded Sounders will open on the road against the winner of the single-game play-in Wednesday in Dallas against Vancouver. The Whitecaps beat Colorado 1-0 Saturday to eliminate Portland  . . . Seattle was 2-1 against Dallas and 0-2-1 vs. Vancouver . . . The Sounders do know that the home game of the two-game, aggregate-goal series will be 7:3o p.m. Nov. 10, tickets for which go on sale Monday.