Sunday’s Russell Wilson-to-Luke Willson 23-yard touchdown with 47 seconds remaining is one of the more unusual passing touchdowns in Seahawks’ history. 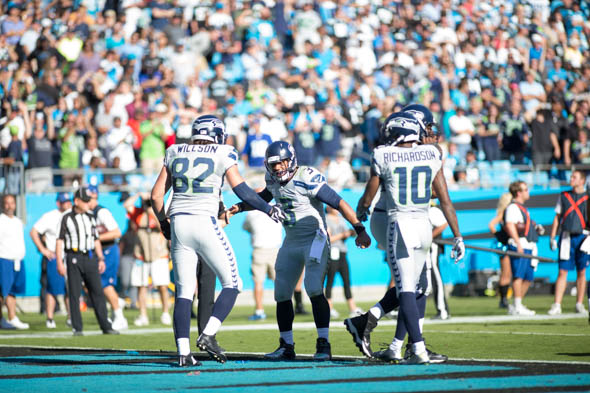 When Russell Wilson threw a 23-yard touchdown to tight end Luke Willson with 47 seconds remaining to give the Seahawks a 13-9 come-from-behind victory at Carolina Sunday, it marked Wilson’s first game-winning TD pass inside the two-minute warning of the fourth quarter since he accomplished the feat twice in the first six games of his NFL career, against the Green Bay Packers and New England Patriots, in 2012.

Wilson has engineered 12 fourth-quarter or overtime game-winners in 44 career contests (regular season and postseason), including two this year. In addition to the nine-play, 80-yard drive against the Panthers, Wilson directed a 13-play, 80-yard drive in overtime to beat Denver Sept. 21 at CenturyLink Field.

Prior to his game-winning throw Sunday, Wilson provided little hint that he had an 80-yard scoring march in him. During Seattle’s first seven drives, Wilson completed 57.1 percent of his passes and barely used his legs. But when the Seahawks assumed possession on their 20 with 4:37 remaining, trailing 9-6, Wilson went 4-for-4 for 53 yards and ran twice for 20 yards, once on a scramble, once on a zone read.

Wilson had three rushes prior to the drive, but two were botched handoffs or snaps.

Wilson’s 23-yard touchdown to Willson wrapped up his 10th regular-season, game-winning drive in the fourth quarter or overtime, tying him with Andrew Luck of the Colts for second-most in the past three seasons (Tony Romo of Dallas has 12).

According to Pro Football Reference.com, Wilson’s winning pass traveled 17 yards before Willson caught it. Prior to that throw, Wilson had gone 0-for-3 on passes traveling at least 15 yards downfield.

The Wilson-Willson touchdown play is a rare one in Seahawks’ history.

Of the 790 regular-season touchdown passes thrown by Seahawks quarterbacks since 1976, only 35 erased a fourth-quarter deficit and won the game (14 in road games), as the Wilson-Willson collaboration did. And of those 35, only 10 occurred in the final minute. These are the 10, sorted by time remaining:

Wilson had one other game that would have made the list had the touchdown won the game. On Dec. 2, 2012, Wilson directed a 12-play, 97-yard, fourth-quarter drive at Chicago, concluding the march with a 14-yard touchdown pass to Golden Tate. That vaulted Seattle into a 17-14 lead with 32 seconds remaining.

Wilson then led the Seahawks on another 80-yard drive in OT, beating the Bears with a 13-yard touchdown pass to Sidney Rice.

During his two-plus NFL seasons, Wilson has orchestrated six fourth-quarter touchdown drives of 80 yards or longer, including two of 90 or more: The aforementioned 97 at Chicago and one of 90 yards vs. St. Louis Dec. 30, 2012 (Wilson 1-yard run).

By contrast, Matt Hasselbeck quarterbacked the Seahawks for 10 years (2001-10) and produced four 80+-yard touchdown drives in the fourth quarter.