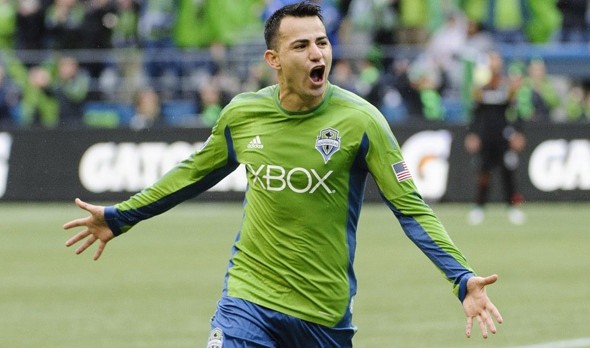 Sounders midfielder Marco Pappa has been voted Major League Soccer Player of the Week by a media panel. Pappa earned the award after two goals in the final minutes of Seattle’s 2-0 victory over the LA Galaxy Saturday, a triumph that secured the 2014 Supporters’ Shield — the first regular-season title in Sounders history.

This is the second time that the Guatemalan has been honred Pappa last claimed the award in Week 29 of the 2011 season as a member of the Chicago Fire. He is the third current Sounders player to win the honor, following Clint Dempsey (Week 5 and Week 6) and Obafemi Martins (Week 24).

After coming into Saturday’s showdown as a substitute in the 73rd minute, Pappa scored the go-ahead goal in the 85th minute. Off a free kick, Pappa raced down the left side and received a through ball from Martins before placing it into the back of the net.

Pappa secured the victory with another goal in the fifth minute of added time. After a challenge on LA Galaxy goalkeeper Jaime Penedo, Pappa won the ball from behind and charged the 18-yard box. He chipped a Galaxy defender to complete his day.

Pappa has 37 appearances for the Guatemala National Team. At the Copa Centroamericana in September, Pappa led Guatemala to a second-place finish, earning the tournament’s Golden Boot as its top scorer and Golden Ball as its best player.

Beginning its MLS Cup run, the Sounders visit the winner of Wednesday’s Western Conference play-in match between FC Dallas and the Vancouver Whitecaps Sunday at 6 p.m. in the first leg of the Western Conference semifinals. The home leg at the Clink is Nov. 10.