Things have become so bad with the Huskies’ offense that Chris Petersen is considering making permanent the move of Shaq Thompson from linebacker to running back. 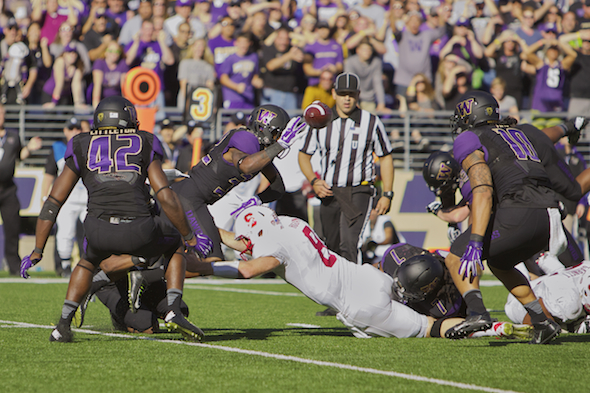 Stnaford quarterback Kevin Hogan can testify that Shaq Thompson (7) has caused much havoc on defense, which he will not do Saturday. / Drew Sellers, Sportspress Northwest

In what increasingly is shaping up as a mulligan year for Washington football, coach Chris Petersen is preparing to cannibalize part of his defense to feed his offense, because the Huskies (5-3, 1-3) face the bewildering prospect of a big game Saturday at Colorado (10 a.m. PT, Pac-12 Networks).

Since the move to the Pac-12,  the Buffaloes (0-5, 2-6) have been a much-muddied welcome mat for their new conference playmates. But this year, they are competitive, as evidenced  by a tough, 40-37 double-overtime loss to UCLA Saturday in Boulder.

The Huskies, meanwhile, scuffed a chance for an upset when a bad-weather game went to the visitors, Arizona State prevailing 24-10 on a Husky Stadium night suitable only for the Coast Guard in zodiac boats.

Even though Washington will again start Cyler Miles at quarterback, he was already directing the Pac-12’s worst offense (355 yards per game) before he was concussed against Oregon. He’s hardly a fix. So desperate are the Huskies that they are considering moving their best defensive player, LB Shaq Thompson, to running back.

For the rest of the season.

“That’s the million-dollar question right there,” Petersen said. “We’re always trying to figure out: Where does (Thompson) give our team the best shot in the arm? I think if we thought that, we could possibly do it. I think it’s kind of a week-by-week evaluation of where we are.”

Week by week comes down to Saturday and the prospect of a three-game conference losing streak if they spit up against Colorado. Petersen has little choice: Due to injuries, his one-time stable of four running backs is down to Deontae Cooper, and he’s a year removed from his third ACL-repair surgery.

The Huskies no longer have what they had in the years with Chris Polk, then Bishop Sankey: A workhorse back capable of 20 to 30 carries a game to take pressure off the passer.

“I think we’re still trying to figure out if we have one of those guys,” Petersen said. “We need to get that guy into a rhythm as well.”

In his first sustained appearance on offense, Thompson looked solid in gaining 98 yards in 21 carries against Arizona State. With Jesse Callier done for the season and Dwayne Washington and Lavon Coleman game-time decisions because of injuries, Thompson was scheduled for most of the snaps in practice, and little on defense.

Petersen thinks Thompson, a 6-1, 228-pounder, can handle the increased load.

“I really do,” he said. “I don’t want to set him up for failure on something like that. But everybody needs reps and you can’t just throw somebody in there. You just can’t. You still have to major on one side.

“I think that’s what some people assume – ‘let’s play him on defense this week too. Let’s get him in the game’ – it’s not that simple. Nobody can do that. But if we needed to move him on the other side, I think if anyone on our team could do it, I think it’s Shaq.”

For the season, Thompson has 188 yards in 30 carries for a team-leading average of 6.1 yards. He’s such a force that Petersen has no choice but to reduce a strength to bolster a weakness.

The decision is made a bit easier because Thompson seems to have a quality backup at linebacker in redshirt freshman Keishawn Bierria, who’s about Thompson’s size. In his second start Saturday he had six tackles, two for loss, plus a sack.

“Our linebackers were playing (well) — Keishawn, he’s a good player,” Petersen said. “We have some good linebackers. We’re just trying to maximize our talent.”

A junior, Thompson is projected by scouts to be a first-round talent in the NFL draft. It seems almost certain, given his maturity, that he will make himself available for the draft. Petersen doesn’t think the shift away from defense will hurt his prospects; in fact, it probably makes him look better.

“I think that this helps Shaq in his long-term future, because I’m not sure what (position) he is,” he said. “I know he’s something really good. I’m not sure at the next level he is a linebacker. He might be a hybrid, a nickel, a safety. He could be a running back.

“We’ve got a lot of tape on him as a linebacker to assess that. I think it helps him.”

Thompson has not said much about his preferences, maintaining he’ll do what the coaches ask, even though Petersen allowed as to how he tried to draw him out.

Certainly, Thompson’s druthers include playing on a team that has more than one Pac-12 win entering November. For an offense that has started three quarterbacks — a coaching career first for Petersen — and remains worst in the league, he’d volunteer to line up behind center.

If the Huskies don’t win Saturday, it may be a second million-dollar question.