With 5-3 Washington facing UCLA and Arizona in upcoming weeks, Saturday’s game at 2-6 Colorado is a crossroads contest for the Huskies this season. 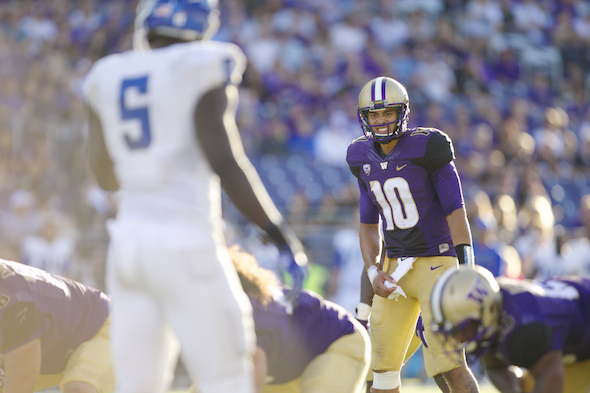 The Colorado Buffaloes certainly don’t look like much and, in fact, have been hugely outclassed since joining the Pac-12 two years ago. At 2-6 overall and 0-5 in conference play, they have dropped four in a row and allowed 35 or more points six times. But the Buffaloes will enter Saturday game with Washington at Folsom Field in Boulder as a four-point underdog, hardly a major endorsement of the Huskies.

Washington’s iffy situation at quarterback – Cyler Miles will start – and the fact the Huskies rank 12th in the conference in total offense are two reasons for the relatively small edge accorded the Huskies, who routed Colorado last year 59-7.

Also, two of Colorado’s losses have come in overtime, including last week’s two-overtime 40-37 setback to No. 25 UCLA.

This is a crossroads game for Chris Petersen’s Huskies. After starting 5-1 and almost playing well enough to upset Stanford, Washington has dropped back-to-back games to Oregon and Arizona State to fall to 5-3. Both losses were expected.

But, after playing Colorado, the Huskies host UCLA and then travel to Tucson to face No. 12 Arizona (College Football Playoff Rankings) before closing with Oregon State at home Nov. 22 and at Washington State Nov. 29 in Pullman.

“Washington had a great opportunity to beat Stanford and really should have won that game and didn’t, which shows that they’re improving each week,”  Colorado coach Mike MacIntyre said this week.

That’s an odd statement. Since defeating Cal 31-7 in Berkeley Oct. 11,Washington has allowed 69 points to Oregon and ASU.

Even though Washington State consistently finds ways to lose (2-6, 1-4), the Huskies will have to face Connor Halliday in the Apple Cup at Martin Stadium in what will be his final game there.

If the Huskies gag at Colorado, they would have to upset UCLA and Arizona on consecutive weekends to avoid falling to 5-6. Then they would have to beat both Oregon State and Washington State to finish with a winning – 7-6 – record. So the Huskies could end up, under the most optimistic scenario, with a 9-4 or 8-5 record. More realistically, they are looking at 7-6, 6-7 or even 5-8.

In case you’re wondering if any previous edition of the Huskies started 5-1 and finished with a losing record, the answer, as Jim Lambright knows too well, is one.

Lambright’s 1998 team had five victories — over Arizona State, BYU, Utah State, Cal and Oregon State sandwiched around losses to Nebraska and Arizona — after seven games. Lambright’s Huskies then went on a three-game losing streak, nipped the Cougars in the Apple Cup and got routed by Air Force in the Oahu Bowl to finish 6-7.

Petersen awaits no such fate, but his team is facing a late-season swoon if it doesn’t beat Colorado Saturday — in fact, one of the biggest in school history.