The Seahawks offense look good with time winding down in a win over the Panthers. What happened the rest of the game? 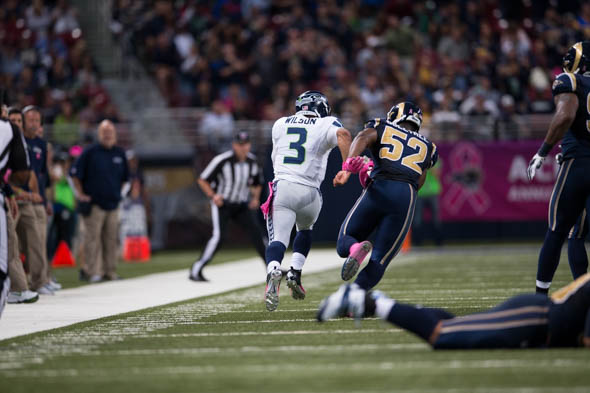 Russell Wilson seemed torn Thursday about the benefits of playing uptempo versus slowing it down. / Drew McKenzie, Sportspress Northwest

RENTON — The Seahawks offense can be explosive. All it needs is to perform more often like it does at ends of halves. That’s when offensive coordinator Darrell Bevell’s group was best able to to move down the field in

The Seahawks put together a 13-play, 77-yard drive at the end of Sunday’s first half, but they came away with no points because a Wilson pass to the normally sure-handed Marshawn Lynch glanced off his hands before getting intercepted Carolina cornerback Josh Norman.

On both drives, the Seahawks went no-huddle.

“Really, ever since I’ve been here, I feel like we’ve been pretty good at two-minute (situations),” Wilson said. “It’s something that we thrive on, it’s something that I look forward to — I know the rest of our offense does as well.”

Of course, it isn’t as simple as just going faster — a point that Bevell reiterated Wednesday during his weekly meet with the media. A fast tempo can leave the defense more vulnerable because it can’t rest or substitute, often slowing down the pass rush.

“We’re trying to figure it out, really,” he said. “I can tell you the one thing that happens is we get in a rhythm and we get a tempo; it always helps when you’re moving. It’s not necessarily that we’re in no-huddle — even on that last drive, (I called plays at the line of scrimmage).”

Wilson said he is comfortable running the no-huddle in part because he ran an up-tempo, West Coast style offense during his college career at North Carolina State, where he threw for 8,545 yards, 76 touchdowns and 26 interceptions over three seasons before transferring to Wisconsin for his senior year.

In his one year with the Badgers, the offensive scheme was predicated on the same methodical, run-heavy attack the Seahawks employ.

So which is better?

“I think our offense is better when we’re on schedule,” Wilson said. “When we speed up the tempo, it’s great because it’s tough on the defense. I definitely like doing that, but there’s also a certain pace of the game that you want to be in rhythm with.

“When we can run the ball, be physical, and hand the ball off to Marshawn, it makes a difference, too.”

Wilson was prep roommate with Bumgarner

Wilson, a fourth round pick in the MLB draft by the Colorado Rockies in 2010, kept pretty rare company in high school. Elite company, even.

The ournaments are reserved for the best high school baseball players in the country.

“Big guy, he could really throw it,” said Wilson, who played baseball and football at NC State. “He was throwing 96. He had a great arm. He could hit pretty good, too. He was a force out there pitching.

The Seahawks offensive line will likely get a much-desired boost Sunday when it welcomes back All-Pro center Max Unger.

Unger missed the past three games with a foot injury, but returned to practice in a limited capacity Wednesday and Thursday. Barring a setback, he will get the nod over backup offensive lineman Stephen Schilling on Sunday against the Raiders.

Seahawks CB Richard Sherman (back), CB Tharold Simon (knee), DT/DE Michael Bennett (toe) and Schilling (knee) appeared on the injury report for the first time this week, as all sat out Thursday’s practice inside the Virginia Mason Athletic Center.

Severity of the injuries isn’t known.