As if losing to USC 44-17 wasn’t bad enough, QB Connor Halliday needed surgery after the game to fix a broken leg. But Mike Leach was weirdly awkward about it. 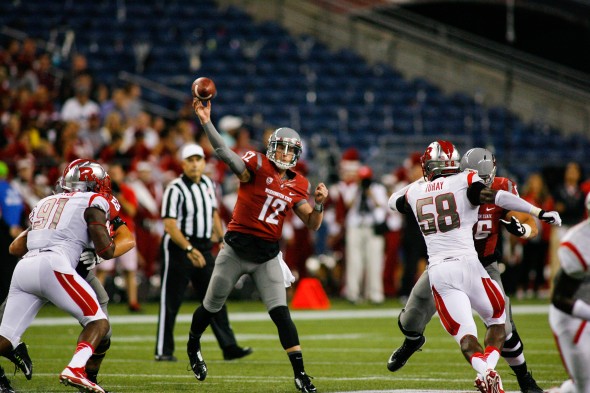 PULLMAN – So many times for so many years in so many games, Connor Halliday staggered to his feet after taking a vicious hit and kept on slingin’ footballs for Washington State. Halliday’s courage was as remarkable as his talent, not to mention his determination to revive the football program at the school he loves so much.

Halliday, the nation’s leading passer, never made it out of the first quarter. Right about the time USC was putting the wraps on the Cougars’ latest defeat, Halliday was undergoing surgery to fix the damage caused when 300-pound Leonard Williams gave the WSU senior a legal lick about one nanosecond after Halliday threw what figures to be the final pass of his remarkable 2014 season.

Various media reports said Halliday suffered a broken fibula in his right leg. WSU coach Mike Leach, who virtually never comments on injuries, would only confirm that Halliday underwent surgery of some sort. Reports that Leach specifically said Halliday leg surgery were incorrect. Leach refused to say if Halliday is done for the year, though a broken leg would obviously do the trick.

Lord knows no one else at WSU would dare comment on an injury. That’s a no-no under the Leach regime, and the coach – who can be alternately charming or abrasive – has intimidated more than a few folks during his three years in Pullman.

Leach’s ability to maintain such power figures to weaken if his rebuilding efforts at WSU do not soon start producing much better results. Obviously, the challenge grew immensely when Halliday went down.

“It’s a big hole in leadership there,” WSU center Sam Flor said. “He’s done a great job of leading the team this year.”

“Connor’s contributions to this program – most of them are ones the public doesn’t fully have appreciation,” Leach said. “His leadership and competitiveness.”

Halliday’s replacement Saturday, redshirt freshman Luke Falk, said he’s “pretty sure” he’ll be starting the final three games. Falk had thrown two passes all year before going 38 for 57 for 370 yards, two touchdowns and one interception in the 44-17 loss to USC.

“Connor and I have had a great relationship,” said Falk, a former walk-on. “He’s been my mentor here . . . my thoughts and prayers are out to him. He’s a great guy, and I really love him.”

That type of verbal expression is rare in the macho world of college football. Halliday, fiery and passionate, tends to spur that type of devotion from those around him. Flor, for example, seemed to be hurting emotionally every bit as much as Halliday was hurting physically after Flor was overpowered by Williams on the play where Halliday was injured.

“They did a twist on the (defensive) line,” Flor said solemnly, “and I just didn’t twist off fast enough. I got beat.”

Flor takes no consolation in the fact that Williams is a ferocious pass rusher whose name is being bandied about as the possible No. 1 overall pick in next year’s NFL draft. Williams is simply better than Flor —  a redshirt sophomore making his second start — and there were similar mismatches all over the field Saturday.

The Cougars have proven beyond any doubt they are too young, inexperienced and mentally fragile to succeed on a regular basis. Saturday’s game simply provided more proof.

“We’re just too up and down emotionally as far as good play, bad play,” Leach said. “We’re all over the map.”

WSU’s fourth consecutive loss officially eliminated the Cougars (2-7, 1-5 Pac-12) from bowl consideration. Three games are left in what is now certain to be Washington State’s eighth losing season in a row. That streak would be 11 if not for a 6-6 season in 2006.

Even the Cougars, the traditional conference whipping boys, never previously put together eight consecutive losing seasons. Leach’s Cougars may not be Paul Wulff bad – remember that 69-0 home loss to USC in 2008, when then-Trojans coach Pete Carroll did everything but start himself at tailback to keep his team from beating the previous head coach’s sorry crew even worse? – but they’re in the ballpark.

“They hit guys right in the chest, hands, guts,” Leach muttered. “If they were bullets, they would have killed them.”

The Cougars, of course, have rolled over and played dead against the Trojans for years. Aside from last year’s ugly 10-7 win at Los Angeles, when Lane Kiffin was spending his final days in charge of the asylum that passed for USC’s locker room, the Cougars seem to have been losing to the Trojans forever. Unfortunately for the Cougars, a loss to USC just mixes in seamlessly with all the losses to other teams these days.