The Seahawks (5-3) took a 24-3 lead over the Oakland Raiders Sunday, then struggled in the second half and escaped with a 30-24 win at CenturyLink Field. 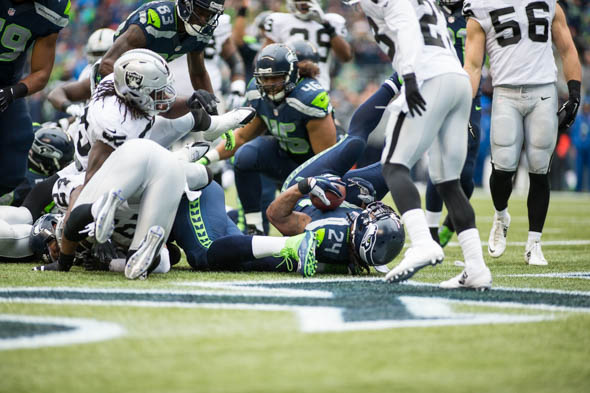 Marshawn Lynch busts in for a first-quarter touchdown Sunday in Seattle’s 30-24 victory over the Oakland Raiders. / Drew Sellers, Sportspress Northwest

For a host of reasons, injuries not the least of them, the Seahawks’ defense of their Super Bowl title is proving far more troublesome than anyone imagined. They were supposed to put a major beating on winless Oakland Sunday at the Clink, but in fact needed Jermaine Kearse to recover an onside kick that was up for grabs with 1:30 to play to ensure a 30-24 victory.

Without that successful scramble for the ball, the Seahawks could have become the first defending Super Bowl champion since the 1997 Green Bay Packers to lose to a winless team (Packers lost to 0-10 Indianapolis). As it was, the 0-8 Raiders gave the 5-3 Seahawks almost more than they could handle.

After falling behind 24-3 on a trio of first-half gaffes, the Raiders, behind rookie quarterback Derek Carr, outscored the Seahawks 21-6 in the second half, largely because Seattle’s offense, when presented scoring opportunities, continually misfired.

Injuries factored heavily. The Seahawks played without LT Russell Okung, C Max Unger, TE Zach Miller, FB Derrick Coleman and lost LG James Carpenter in the third quarter with a sprained ankle. They practically had guys off the street on their offensive line much of the game.

Compounding that, Russell Wilson spent much of the game curiously overthrowing his receivers or failing to get on the same page with them. Wilson completed 17 of 35 for 179 yards, didn’t throw a touchdown and nearly had two balls picked off, including one that should have been an Oakland pick-six.

Fortunately for Wilson and the Seahawks, the defense built enough of an edge in the first half to make it difficult for the Raiders to overcome.

“We played so well in the first half,” said coach Pete Carroll. “We were ball-hawking, taking care of the ball, and it was great to see that. Then we ran into some problems. We had a bunch of 3-and-outs, we got a punt blocked. But we got the win and I feel good about that.

“Every week is a challenge. You have to remember that last year we had eight games that could have gone either way. We won five and lost three. Today, we got better because a lot of young guys got to play and that will help us down the stretch. I know you’d like it to be cleaner and smoother, but this is the way it is.”

After the Raiders took a 3-0 lead, the Seahawks received the first of two Marshawn Lynch rushing touchdowns and then went up 14-3 when Bruce Irvin tipped a Carr pass, caught it, and ran it 35 yards for a touchdown.

“After tipping it, it came down and I just tried to make a play,” said Irvin, who had two sacks a week ago against Carolina. “I knew I scored, and now we’ve just got to keep pounding away.”

On Oakland’s next drive, Richard Sherman picked off Carr and returned it 22 yards to the 18-yard line, but the Seahawks’ offense struggled and Seattle settled for a 34-yard field goal by Steven Hauschka, his first of three.

Lynch had his second touchdown on a five-yard run just before halftime to make it 24-3. The Raiders started their climb back early in the third quarter when Denico Autry blocked a Jon Ryan punt and Brice Butler recovered it in the end zone for a touchdown.

Hauschka answered a one-yard TD from Carr to Mychal Rivera with a 30-yard field goal that increased Seattle’s lead to 27-17. Hauschka hit a 40-yarder for a 30-17 Seattle lead with 9:19 to play.

Still not over. Carr drove Oakland 64 yards in nine plays and threw another TD to Rivera with 1:52 remaining, setting up Sebastian Janikowski’s onside kick that Kearse recovered.

The Seahawks botched a number of scoring opportunities. After Oakland muffed a kickoff, Hauschka sent a 46-yard field goal attempt wide right. The Seahawks had another touchdown drive scotched when a holding penalty erased a 43-yard pass from Wilson to Lynch. Two pre-snap penalties ruined another drive.

But the Seahawks did a lot of good things defensively. They had three takeaways, held the Raiders to 37 yards rushing and 226 yards overall.

The Seahawks also saw that Lynch was much more involved in the offense. He rushed 21 times for 67 yards and caught five passes for 76. If not for a holding call on Paul Richardson on a 43-yard catch from Wilson in the second quarter, Lynch would have had his first 100-yard receiving game as a Seahawk.

The Seahawks have won 25 of their last 32 regular-season games and 18 of their last 20 at the Clink . . . Lynch’s two rushing TDs were his first since scoring one against Denver in Week 3. He has 46 rushing TDs in his Seattle career, third all-time in franchise history behind Shaun Alexander’s 100 and Curt Warner’s 55 . . . Wilson’s win was his 29th in the regular season . . . Sherman’s second-quarter interception, his first of the season, marked the 21st of his career, most in the NFL since 2011 . . . Ryan’s blocked punt was his first of the season . . . The Seahawks are now +4 in turnover differential.

The Seahawks host Eli Manning and the New York Giants next at 1:25 p.m. Sunday at CenturyLink Field  (FOX).