With a slew of key players out with injuries Sunday against the Raiders, the Seahawks leaned on veterans for a handful of highlight plays to improve to 5-3. 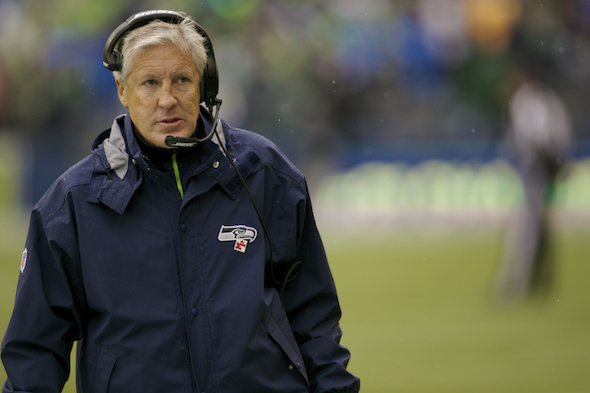 Despite injuries, stories over locker room tumult and an offense that often sputters, coach Pete Carroll has led the Seahawks to a 5-3 start. / Drew Sellers, Sportspress Northwest

Seahawks coach Pete Carroll was in glass-half-full mode Sunday after the Seahawks upended the winless Oakland Raiders, 30-24, on a drizzly afternoon at CenturyLink Field. He did, however, have an unfiltered message for those who might deem it an ugly win.

“That’s how this is,” Carroll said. “I know you all like it easier and smoother and cleaner and all that, but it’s a battle. So, suck it up.”

Bluntness is rare from Carroll, whose sunny attitude drew raves last year as the Seahawks cultivated a locker room that encouraged players to be themselves on their way to Super Bowl XLVIII.

That hasn’t necessarily changed in 2014, but the slew of injuries at key positions is forcing   the Seahawks to turn to inexperienced players. In turn, that puts more pressure on the remaining healthy veterans from last year’s Super Bowl squad to step up and provide leadership after Seattle stumbled to a 3-3 start.

Against the Raiders, that was never a problem.

Consider: RB Marshawn Lynch, in his fifth and likely final year with Seattle, spent his afternoon terrorizing Oakland’s defense, racking up 143 all-purpose yards (67 rushing, 76 receiving) and two rushing touchdowns. His best run came on the Seahawks’ first drive, when he bulled over what seemed like half of Oakland’s defense on a three-yard rumble in which he refused to go down after he appeared to be stopped short of the goal line.

“I think maybe six of them were my own team, so it was all good,” Lynch said.

He also tied WR Doug Baldwin with a team-high five catches and led the Seahawks with 76 receiving yards. 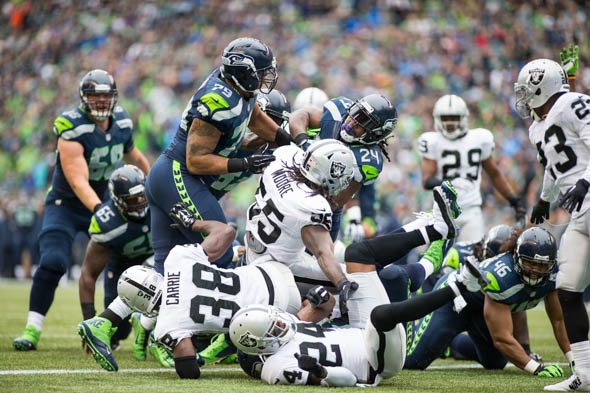 Lynch’s production was mandatory on a day QB Russell Wilson admitted that he wasn’t at the top of his game.

Playing behind an offensive line that played without C Max Unger (foot) and LT Russell Okung (calf), then lost LG James Carpenter to an ankle sprain, Wilson finished 17 of 35 for 179 yards, no touchdowns and no interceptions — good for a 42.1 QBR (out of 100), according to ESPN. Even backup C Stephen Schilling was limited by a knee injury. 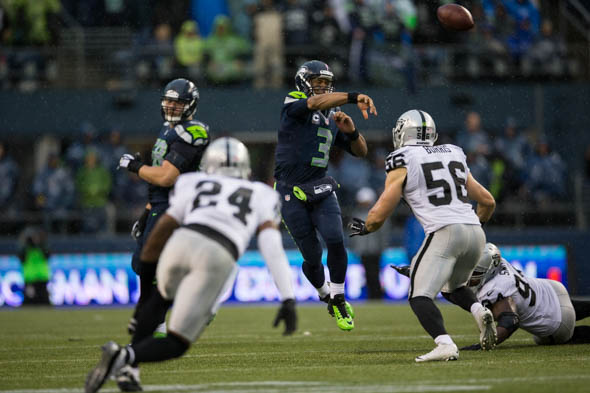 With a couple of seconds left in the first quarter and the Seahawks leading 7-3, LB Bruce Irvin jumped and tipped QB Derek Carr’s pass, caught the free ball returned it 35 yards for a touchdown. It was just the second pick of Irvin’s career.

After juking a defender, Irvin barely outran Carr to the left pylon in the Clink’s north end zone. The play was upheld after a replay review. 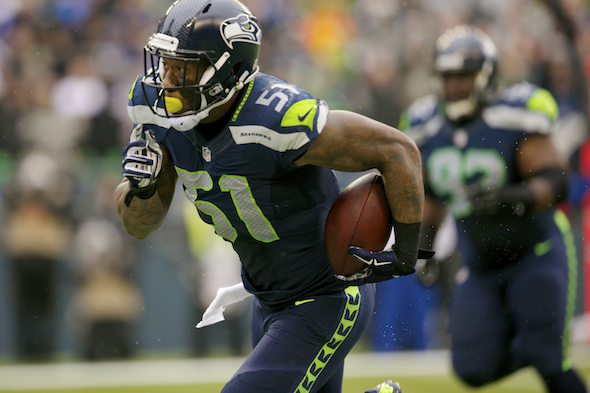 Irvin had three tackles against the Raiders a week after recording two sacks in a win over the Panthers. / Drew Sellers, Sportspress Northwest

“I should have ran (Carr) over, huh? I was like, ‘I can’t let him catch me because if he catches me, they’re going to be talking stuff about me,’ so I just tried to get in,” he said. 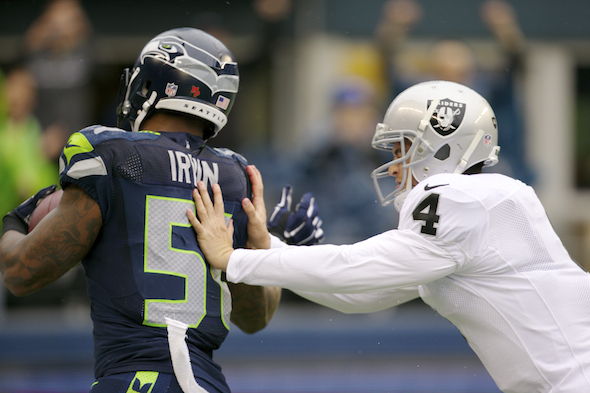 Well, he’s had a relatively quiet season because quarterbacks have avoided throwing to his side of the field, and he’s tempered his brash commentary. But Sunday, Carr was just naive enough to test the Stanford graduate from Compton, CA., in the second quarter on a back-shoulder throw intended for WR Andre Holmes.

Sherman, a former wide receiver, turned first and made his first interception of the year, then returned it 22 yards with the help of a pancake block from S Earl Thomas. The turnover, one of three the Seahawks forced, set up a 34-yard Steven Hauschka field goal, giving the Seahawks a 17-3 lead. 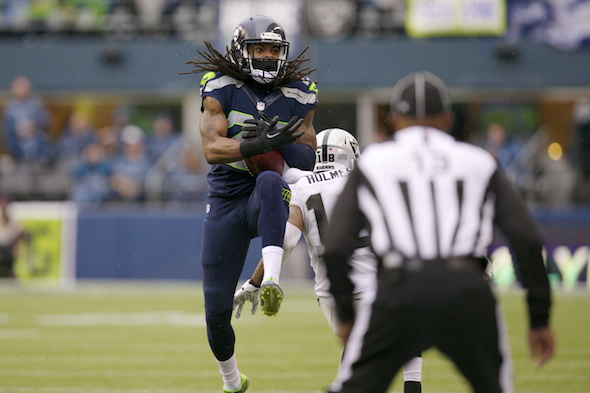