Marshawn Lynch, with 67 yards rushing and 76 receiving, delivered a rare feat in Seahawks’ history Sunday as Seattle shakily improved to 5-3. 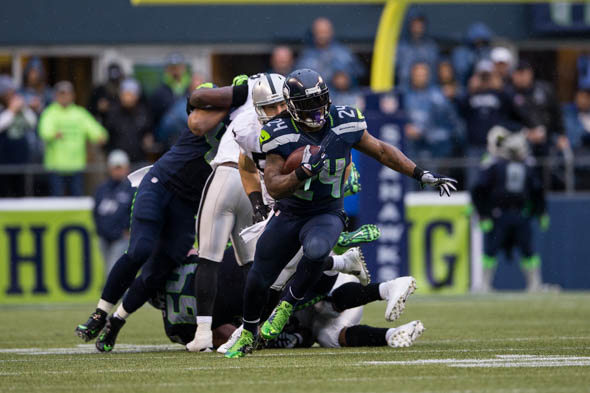 Marshawn Lynch has produced numerous big moments for the Seahawks, but rarely has he had a game quite like Sunday’s, when he ran for 67 yards and two touchdowns and caught five passes for 76 in Seattle’s 30-24 victory over the Oakland Raiders. Lynch’s numbers would have been more impressive if not for three plays.

Lynch had a 43-yard catch from Russell Wilson nixed due to a holding penalty on rookie Paul Richardson, a 20-yard run scotched on a motion flag on Garry Gilliam, and an 11-yard catch wiped out when Gilliam was flagged a second time (ineligible receiver downfield).

Even with the call backs, Pete Carroll seemed elated that the Seahawks were able to “feed the Beast” as many times as they did only a week after Lynch had a meager 15 touches (14 rush, one pass) against the Carolina Panthers.

“He was terrific,” Carroll said. “He was so good on the screen game. Gosh, it was one spectacular play after another. Those were big plays in the game . . . That was so cool to see him out in the open field like that, where he could really tear it up and he did a great job. ”

The most memorable play covered only three yards and will live long in Lynch lore (see Thiel: Seahawks Return to the Mode of the Beast).

Sunday’s game marked the sixth time in Lynch’s career, and his third as a Seahawk, that he led his team in rushing and receiving yards in the same game. His 67 rushing yards came on 21 attempts and his 76 receiving yards on five targets by Russell Wilson. Lynch caught all five.

Lynch is the first player in franchise history to twice lead the Seahawks in rushing and receiving with a minimum of 60 rushing and 70 receiving yards. Only seven others even did that once, as the following shows:

Five performances did not make the list because they didn’t quite meet the criteria. Going chronologically, former fullback John L. Williams had 109 (rushing) and 74 (receiving)  in the Kingdome Dec. 11, 1988 against John Elway’s Denver Broncos. But his 74 receiving yards didn’t lead the Seahawks that day as Steve Largent had 76.

WR Joey Galloway had an 86/114 game against Jacksonville Nov. 12, 1995 that included an 86-yard reverse for a touchdown and two TD catches. But Chris Warren ran for 121 yards to lead the team.

The first game in which Lynch led the Seahawks in both rushing and receiving occurred Sept. 13, 2011 against Baltimore when he ran for 109 and caught five passes for 58, 12 shy of the criteria.

The most remarkable game on the list was Alexander’s Sept. 29, 2002, against the Vikings. In that one, the Seahawks scored 28 points in a 1:47 span in the second quarter. Alexander scored three of those TDs, one on an 80-yard pass from Trent Dilfer.

Russell Wilson did not have good game against the Raiders – in fact, he delivered one of the worst of his career. He completed 17 of 35, didn’t throw a touchdown, nearly threw two interceptions, and finished with a passer rating of 63.9.

But the Seahawks won. They don’t win often when their quarterback checks in with a rating of less than 70. Since Wilson became Seattle’s quarterback in 2012, the Seahawks have won only three times when Wilson’s passer rating was 63.9 or worse. His six lowest ratings in winning games:

Wilson attempted 11 passes that traveled more than 10 yards downfield. He completed  two, 18.2 percent, tied for the worst percentage on such throws in his career.

Wilson also had 12 off-target passes Sunday, a career high. While he went 5-for-5 with Marshawn Lynch and 5-for-6 with Doug Baldwin, he went 1-for-7 with Jermaine Kearse and 1-for-5 with Luke Willson.