UW coach said Monday he’s never coached a player as good as linebacker/running back Shaq Thompson. But is he a legit Heisman candidate? 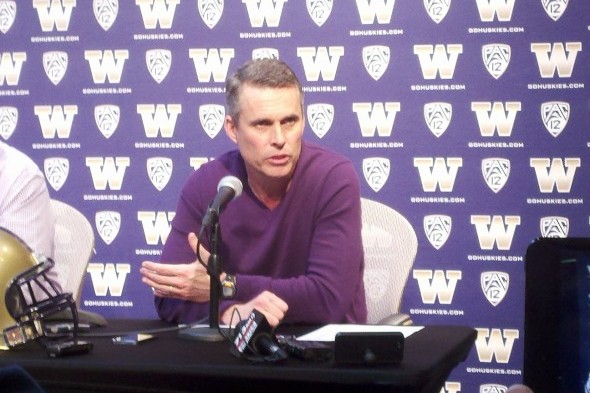 When Washington coach Chris Petersen was asked Monday to comment on linebacker-turned-running-back Shaq Thompson’s bid for the Heisman Trophy, he fired back with a question for the media throng assembled in the Founder’s Club.

“What is The Heisman Trophy winner? What is it?” he asked. “Then I can answer your question.”

Response: In theory, it is the award that goes to the best player in college football.

Petersen is certainly not the first coach to lobby for more recognition for a star player, but the claim, citing Thompson’s ability to seamlessly transition between offense, defense and special teams, will still likely spark debate.

More certain is that Thompson, at the least, improved his case for college football’s most prestigious honor Saturday in the Huskies’ 38-23 win over the Buffaloes at Folsom Field. He rushed 15 times for a 174 yards and a touchdown, caught two passes for 41 yards and helped UW overcome a 20-17 halftime deficit to improve to 6-3 (2-3 Pac-12).

Among factors hurting Thompson’s bid is competition from within his own conference. Oregon QB Marcus Mariota was named Monday Pac-12 Offensive Player of Week after going 19-of-30 for 258 passing yards and running nine times for 85. He scored four touchdowns — two running, two passing — as the Ducks snapped a two-game losing streak over the Cardinal with a 45-16 win at Autzen Stadium.

For what it’s worth, Thompson isn’t found in ESPN’s latest “Heisman Watch” poll, though an article in Monday’s Washington Post said he should at least receive some consideration because he was a dominant linebacker for seven games, earning midseason All-America honors from ESPN, NFL.com, CBS Sports and Phil Steele, before moving to running back to spark a UW offense that still ranks last in the conference in total yards (365 per game).

Even though RB Lavon Coleman (shoulder) and Dwayne Washington (chest) are healthy, Petersen said Thompson will “probably” start at running back and play “some defense” Saturday when UW welcomes No. 18 UCLA (7-2, 4-2 Pac-12) to Husky Stadium (4 p.m. PT, FOX Sports 1).

Petersen said depth at linebacker has allowed him to move Thompson over to offense, though the junior from Sacramento, CA., is still listed as the starter in front of redshirt freshman Keishawn Bierria. And in Petersen’s words, Thompson is still a “defensive guy at heart.”

On a number of occasions, Petersen this season has pointed out how difficult it is for coaches from a first-year staff to teach players recruited by a previous regime. He said Monday it feels like the Huskies take “one, two steps forward, then one step back.”

Agonizing as is the process, it pales in comparison to how Petersen has to manage his emotions on the sidelines.

“Trust me, I don’t even look how I feel,  half the time. Now, I don’t really know how I look, but I feel like crying, screaming, throwing tantrums and falling down on the ground,” he said. “That’s what I’d really like to do. It’s painful not to do that stuff, it really is.”

“He practiced a little bit last week, and he should be much better this week, so we’ll see,” Petersen said.

Lightning-fast WR John Ross has only 17 catches for 371 yards and four touchdowns this season, an indicator of UW’s struggling passing attack. But the sophomore might soon be finding new ways to contribute after his playing time diminished against Colorado following a week of practice in which he was “banged up.”

Monday, he apparently practiced at cornerback and was listed as the No. 2 WR behind freshman Dante Pettis on UW’s depth chart after Pettis hauled in a 28-yard touchdown pass and returned a punt 87 yards for a score Saturday.

Ross served as a backup cornerback for the final three games of the 2013 season.

“We’ll always try to move guys around, if somebody can help us on the other side of the ball, if someone can make more of an impact,” Petersen said of Ross. “If we can play a guy two ways, we’ll do that.”