Carroll at Seahawks midseason: ‘We survived’

Seahawks coach has advice for fans thinking it was going to be easy: “Suck it up.” Giants, Sunday’s foe, offer evidence how hard it is, and they won two Super Bowls in 4 years. 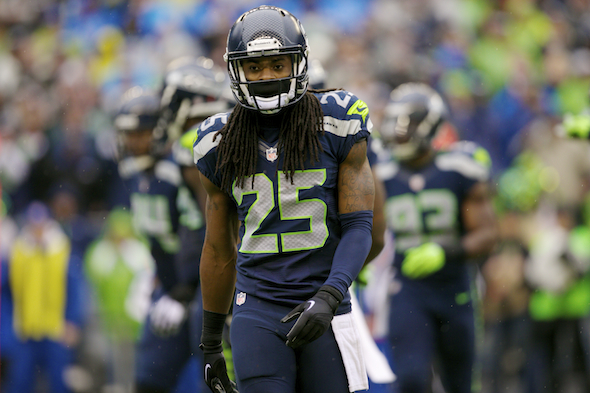 It’s been a trudge so far for Richard Sherman and the Seahawks. / Drew Sellers, Sportspress Northwest

Any notion having vanished that the Seahawks would have the same swash in their 2014 buckle they had in 2013, coach Pete Carroll has taught himself to lower his week-to-week ambitions.

“We got through the game and the quarterback didn’t get killed,” he said Monday after the 30-24 win over the Oakland Raiders.

Playing at times with three offensive linemen making their first NFL career starts — Alvin Bailey, Garry Gilliam and Patrick Lewis — Carroll knew more than most that losses of the game and Russell Wilson were distinct possibilities. So fans who wanted a blowout triumph over the NFL’s only winless team, to restore confidence in the season’s second half, well . . .

Here’s what he said Sunday to media after the game: “I know you all like it easier, and smoother and cleaner and all that, but it’s a battle. So, suck it up.”

I was expecting something a little more inspiring from the leader of the defending Super Bowl champions. Imagine Carroll, played by Sean Connery, astride a massive white stallion, swinging a large blade above his head, shouting, “Our swords shall run with the blood of the infidels!”

I asked him Monday if he would elaborate. After all, we in the media often tell him how to coach, so it seems only fair that we allow him to tell us how to do our jobs.

“That was just having fun with the message that games don’t always go like you want them to go,” he said. “Most fans would like to see the game over in the first quarter, and they can kick back and not have to fret through the outcome.

“It’s not like that. The league is so tough, each game is so hard and the challenges are every single week. For the most part, if you’re with us, games are pretty darn close.”

For the most part, Carroll is right; ask the Broncos and 49ers about life in the NFL after their losses Sunday. But the expectations in Seattle created by a 13-3 regular season and a 3-0 postseason, and the relative youth of the roster, have warped the sensibilities of the 12s lusting for a repeat.

Several times in the uneven first half of the season, Carroll has made his case that the Seahawks had eight close games last season, lost three, and the other five were tossups. So the Seahawks could just as easily have been perhaps 8-8 in 2013.

Pure speculation of course, but plausible, given the NFL’s legislated parity and the frequent randomness of outcomes. What hasn’t been said directly by Carroll or his players, because they are loath to admit it, is that since being crowned, hailed and paid, they have lost their championship edge.

Carroll has spent his entire coaching career fighting the worst in human nature and appealing to its best. He’s won many more battles than he’s lost. But this is the toughest fight of his career: Working around the inevitable attrition in manpower, health, cohesion and salary-cap funds that are mandated by the laws and customs of the NFL.

Finally, Monday, he made a reference to the lost edge. And its potential recovery.

“There’s a fine line between that crazed mentality that you see, and when you think you’re trying really hard,” Carroll said. “But there’s a difference. The energy of it and the emotion of it was so obvious.”

For reasons easily understood, the energy and emotion aren’t the same as they were in the aspirational year. Despite the denials of Earl Thomas and Richard Sherman at press briefings following their big paydays that things wouldn’t change, things have changed. So have they. Can’t be helped.

The Seahawks are neither as talented nor as driven as a year ago.

Doesn’t mean they can’t succeed. It’s just so much harder.

Carroll said in the Oakland game and the 13-9 win at Carolina, the defense had regained most of its edge.

The guys have really captured it,” he said. “I’m hoping we can keep going. It will make all the difference to us.”

We’ll see. Much again depends on health, but it borders on silliness to keep pining for “getting everyone back” when it’s just as likely other players will be injured. Like LG James Carpenter, whose recovery from an ankle sprained Sunday was not known Monday. If he’s out, the Seahawks line still isn’t well, despite the potential returns of C Max Unger and LT Russell Okung.

Even if all are back, the O-line was average at best before the injuries.

What Carroll is hoping for is that the experience gained by backups now, at a manageable 5-3, will serve him well later.

“I think we’re making progress,” he said. “We’ve survived some really hard games and we’ve won some really hard games. We’re battle tested and we’re ready to go. The fact that we can make this (seasonal) turn with young guys prepared to play, with some guys coming back to their health — we’ll get a second wave of returnees as well —  I’m feeling pretty good about our chances to go out and win this game this week.”

Speaking of this week, Sunday’s opponent, the New York Giants, who were belted Monday night 40-24 at home by Indianapolis in a game not nearly that close, are the NFL’s best example of how one year’s results have little bearing on the next year’s results.

Consider the past seven years:

The Giants won the Super Bowl following a 2007 season of 10-6. The next year they were 12-4, yet were knocked out in their first playoff game. The next two seasons were 8-8 and 10-6, neither good enough for the playoffs.

In 2011, they were 9-7, yet won the Super Bowl again. In 2012, they were 9-7, but didn’t make the playoffs. Last season, they were 7-9. Now, despite high expectations following big free-agent investment in the defense, they are 3-5 and on a three-game losing streak flying across the country to face a team that whipped them 23-0 11 months earlier.

If you can make sense of that pattern, you’ll certainly delight in a tumble through a commercial clothes dryer.

Let’s add another wrinkle to your brow: Throughout this eight-year run of two Super Bowl wins and four (now likely five) seasons without playoffs, they have had the same general manager (Jerry Reese), coach (Tom Coughlin) and quarterback (Eli Manning). That’s exactly the blueprint the Seahawks are working on — continuity among the three most vital positions in any NFL franchise.

All three were geniuses in two seasons and destined to be idiots in six.

The Giants are the epitome of an essential truth of the NFL — whatever you think you know about games, teams and seasons, fugeddaboudit. The Seahawks in 2013 were a rare exception to the rule: Forecasted to win the Super Bowl by many, if not most, media outlets, bookmakers and fans, they did exactly as predicted.

Hard as that was, they are embarked on an even more formidable task. So, to the 12s, pay heed to the wisdom handed down from on high: