Herman Sarkowsky, a Seattle real estate developer, had a long career in professional sports and was a member of the original Seahawks’ ownership group. 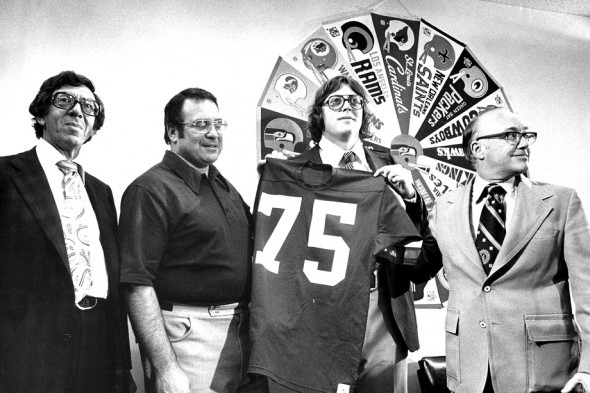 Herman Sarkowsky, left, then a partner in the ownership group of the Seahawks, welcomed Seattle’s first No. 1 draft choice, Steve Niehaus of Notre Dame, to Seattle in 1976 along with head coach Jack Patera (next to Sarkowsky) and general manager John Thompson. / Seahawks

Herman Sarkowsky, one of the original owners of the Seahawks and Portland Trail Blazers, passed away Sunday in Seattle at 89. A Northwest real estate developer and owner of Sarkowsky Investments, Sarkowsky’s interest in professional sports included football, basketball and thoroughbred horse racing.

Sarkowsky and the original ownership group owned and operated the Seahawks until Aug. 30, 1988, when it sold to California real estate developers Ken Behring and Ken Hofmann.

Sarkowsky teamed with Larry Weinberg of Los Angeles and Robert Schmertz of New Jersey to pay the $3.7 million expansion fee in 1970 to secure what would become the Trail Blazers. Sarkowsky sold his stake in the Blazers in 1975, largely to avoid a conflict with becoming an owner of the Seahawks, who began play in 1976.

After his association with the Seahawks ended, Sarkowsky invested in Northwest Racing Associates, which developed Emerald Downs in Auburn, and owned numerous thoroughbreds of prominence, including Phone Chatter, the champion two-year-old filly of 1993 and winner of that year’s Breeders’ Cup Juvenile Fillies.

In addition to his sports-related investments, Sarkowsky was one of the most successful builders and real estate developers in Seattle history.

He developed Key Tower (now Seattle Municipal Tower) in Seattle, and was a partner in the Frederick and Nelson department store chain. He founded United Homes Corp. in the 1960s, which became the largest home-builder in the Seattle area at the time.