Where does Shaq Thompson’s season rank?

The Washington Huskies have had some outstanding individual seasons in the past 50 years. But which season stands out the most? Vote here. 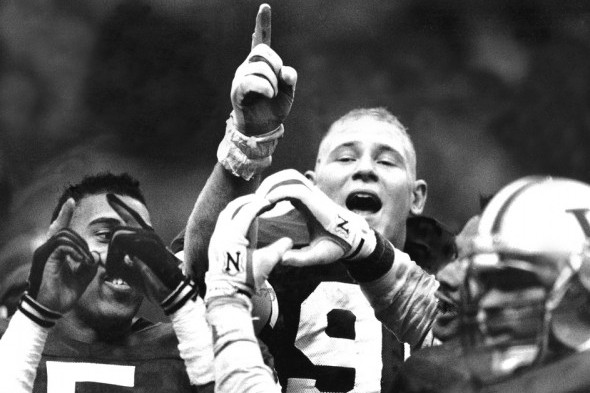 Steve Emtman won the Outland Award and Lombardi Trophy in 1991 as Washington won a share of the national championship. / David Eskenazi Collection

It’s rare when the Heisman Trophy is mentioned in connection with a University of Washington football player. Only six Huskies in the 77-year history of college football’s most prestigious — and hyped — award have finished in the top 10 in the voting, and no offensive player has finished higher than seventh (RB Greg Lewis, 1990).

This year, Washington has a unique, if longshot candidate. LB/RB Shaq Thompson won’t win the Heisman – Steve Emtman couldn’t win in 1991 – but Thompson might wind up in the top 10 in the vote.

Thompson might have had a credible case to make for his candidacy if Heisman voters were to select the “best college football player in America,” as is their stated — and vague — mandate. But these days, the top candidates are identified well before the season begins and a winner is usually proclaimed after a long battle of attrition.

Almost never does a legitimate Heisman candidate emerge out of nowhere at midseason as Thompson has done, that due to his remarkable ability to play offense and defense, plus special teams. That didn’t deter Husky coach Chris Petersen this week from endorsing Thompson for the award.

“Hey, I don’t get a chance to watch everybody around the country,” Petersen said. “But I do see a lot. And I haven’t seen a better football player out there than that guy (Thompson). I know there are some good ones out there, but what this guy does in terms of special teams and offense and defense and all those things, I haven’t seen a better one.”

Next question: Has any Husky ever had a season as good as the one Thompson is having? Until Thompson’s is in the books, the trophy goes to Emtman for 1991: Outland Trophy, Lombardi Award, fourth in the Heisman vote. Despite frequent double teams, the defensive lineman overwhelmed all who contested him, recorded 20.5 tackles for loss and 6½ sacks as he played his way into becoming the No. 1 overall pick in the 1992 NFL draft.

Thompson is already on two “watch lists,” the Bednarik Award for top defensive player and the Paul Hornung Award for the most versatile. Barring injury, Thompson seems a heavy favorite for the Hornung, given his four defensive touchdowns plus his 174 yards rushing and touchdown against Colorado –  with four games to play.

Below are the best single-season performances by a UW player in the past 50 years, based upon Heisman finishes, All-America selections, national awards, and statistical achievements.

Leaving Emtman out of the discussion (he’d win easily), who else had the best season? Vote below and comments are encouraged.

Dave Williams, TE, 1965: It took 45 years for a UW tight end to break the records Williams established for the position. Austin Seferian-Jenkins finally eclipsed Williams’ single-season receiving yardage total (795) in 2013 (850), but Williams still holds UW tight end records for most receptions in a game (10) and most TDs in a game (3), both in 1965. Williams also still holds the single-game record for most yards by all receivers, 257 against UCLA in 1965.

Al Worley, DB, 1968: Worley set a still-standing NCAA record with 14 interceptions, and he did it in 10 games. To put that in context, only one other player has had as many as 13 picks in a season despite the fact that schedules have expanded to 13 games, plus bowls. Worley made five All-America first teams.

Michael Jackson, LB, 1977: Jackson didn’t become an All-America, but he made first- team All-Coast and set records no Husky linebacker has seriously approached – 219 tackles in 12 games as the Huskies reached the Rose Bowl for the first time since 1961. Jackson’s total included 29 against Washington State, 29 against Oregon State and 28 against Mississippi State, the top three single-game totals in UW history. In the past three decades, only one other Husky has had as many as 24 in a game (Mark Jerue vs. Arizona State in 1981).

Ron Holmes, DT, 1984: Holmes made five All-America first teams as the Huskies finished 11-1 and placed second in the national polls. He led the Huskies in sacks and tackles for loss.

Greg Lewis, RB, 1990: Lewis won the Doak Walker Award as the nation’s outstanding senior running back and was a first-team All-America choice by the Walter Camp Foundation and The Sporting News after rushing for 1,407 yards. Lewis finished seventh in Heisman Trophy voting.

Mario Bailey, WR (1991): Bailey was deemed first-team All-America by The Associated Press, United Press International and the Football Writers Assn. of America after catching 18 touchdown passes for the co-national champions (no other Husky receiver has caught more than 12 in a season (Jermaine Kearse in 2010).

Lincoln Kennedy, OT, 1992: The main operative on an offensive line that helped Washington to a 9-3 record and average 387 rushing yards per game, the Husky tackle earned unanimous All-America honors and was a finalist for the Lombardi Award, the only Husky offensive lineman with that distinction.

Lawyer Milloy, FS, 1995: In his final year as a Husky, Milloy was selected first-team All-America by nine NCAA-recognized selectors, including The Associated Press, United Press International and the Walter Camp Foundation. The only other Husky with nine such designations: placekicker Nelson in 1982 (in 1991, Emtman made eight first teams).

Corey Dillon, RB, 1996: The Franklin High graduate played only one season at UW, but posted the greatest year of any UW running back — 1,555 yards and 22 TDs – up to that time. His 1,522 yards included an NCAA record 222 and four TDs in the first quarter against San Jose State.

Marques Tuiasosopo, QB, 2000: No UW quarterback has ever been more responsible for his team’s success than Tuiasosopo in 2000. The Huskies trailed in eight of their 11 wins, only to have Tuiasosopo rally them to victories. He threw for 2,284 yards and 15 TDs and rushed for 469 and seven TDs in leading Washington to its first Rose Bowl since 1992. Against Purdue in Pasadena, he completed 16 of 22 for 138 yards and a TD and ran 15 times for 75 yards and a score as the Huskies won 34-24. Tuiasosopo was the 2000 Pac-10 Player of the Year and 2001 Rose Bowl MVP. He finished eighth in Heisman Trophy voting.

Shaq Thompson, LB/RB, 2014: Thompson has scored five touchdowns, four on defense (one interception return and three fumble returns, including 100 yards against Cal) and one on offense, last week at Colorado (24-yard run) when he piled up 174 rushing yards.