Against Oakland Sunday, the Seahawks’ offensive line had for a time four newbies and old man Sweezy. Said Cable to Garry Gilliam: “How many plays do you know at guard?” 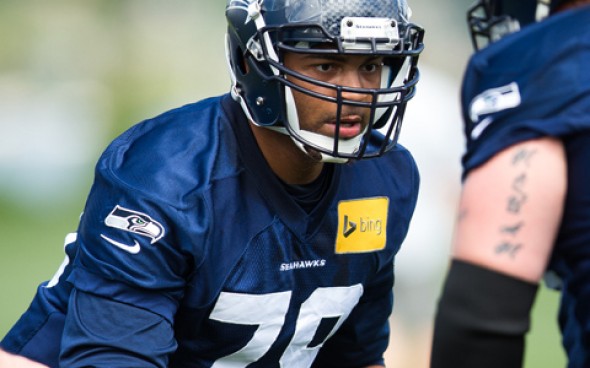 Here’s how bad it was along the Seahawks’ offensive line Sunday against Oakland: When LG James Carpenter came out with a sprained ankle, assistant coach Tom Cable hustled up to undrafted free agent rookie tackle/tight end Garry Gilliam with a question:

Since Gilliam in his entire football life had taken exactly one snap at guard, he paused. Which was good enough for Cable, who shoved Gilliam into the game, presumably with a note pinned to his jersey for the huddle: “My boy Garry is new to school. Please help him.”

So when the question comes up as to how the game against the winless Raiders went down to the last couple of minutes before it was decided . . . now you know.

Other matters contributed, but the injury mess in the O-line bordered on the comical. As Patrick Lewis, pressed into his first NFL start as a third-string center, put it dryly,  “It was a journey . . . gotta learn the Seahawk way.”

He just didn’t know the theme song for “The Seahawk Way” was borrowed from Benny Hill.

The injury-induced chaos helps explain how the O-line drew six penalties and allowed QB Russell Wilson to be hurried on 12 of his throws, while being hit twice. He’s too polite to blame the line, but at the Clink game Sunday against the New York Less Than Giants, do not be surprised to see LT Russell Okung and C Max Unger carried by teammates onto the field in sedan chairs, led by Wilson.

Okung and Unger sat out Sunday with injuries, but are greatly wished to be back by the Seahawks. When Carpenter came out, that left second-year man Alvin Bailey, 23, at left tackle, rookie Gilliam, 24, at left guard and Lewis, 23 and signed Oct. 8 off the Browns’ practice squad, at center. Discounting a couple of starts in extra-tackle formations for Bailey, it was the first major playing time for all three in their positions.

With rookie Justin Britt, 23, barely holding down right tackle, that left RG J.R. Sweezy as the senior eminence on the line at a grizzled 25.

Edited for youngsters, the Seahawks playbook was more like a coloring book.

“You have to tailor things — we were in the same mode last year,” said coach Pete Carroll, referring to playing time given to Bailey and Michael Bowie due to injuries. “You have to adapt to what they can handle. Maybe more so than other positions.

“These guys have so much going on and it’s so complex. You have to keep it where they can handle what’s going on.”

Carroll labeled Sweezy’s role as critical to creating what little order there was in the kiddy corral.

“He was the only regular in there for a while, so he had to help us,” he said. “He’s done a tremendous job developing over the last few years. He’s really at the top of his game right now.”

The man in charge of the fire drill Sunday, Cable, shook his head.

“You don’t expect Sunday morning that (Unger, Okung and backup center Steve Schilling) will be up, but only for emergencies,” he said. “Then Carp gets hurt. Then you got to piece it together.

“It’s a grind in the middle of the game because of all the junk that goes on in there. But it was cool, because we got things done.”

Gilliam, playing guard for the first time, pointed out that the zone blocking scheme helps make targets easier to understand. But that wasn’t the only thing that needed mastering.

“The way we’re structured, the blocks across the board are similar, regardless of the position you’re in,” he said. “I’m sure they do that on purpose. For me, it wasn’t so much what my assignment was, but how do I do it?

“(Interior D-linemen) are bigger people, and squattier. I’m long. How do I get under him? That was more challenging than who I was blocking. Without reps in practice, I’m learning on the go.”

Additionally, the presence of Gilliam and Bailey in regular scrimmage positions meant their absence from the tight-end/third-tackle personnel groups. The Seahawks had to throw out that part of the offense.

In addition to the line’s infancy, Zach Miller’s injury absence at tight end means that Luke Willson, 24, is the new starter. He’s usually a better pass catcher than blocker, but when he was targeted five times Sunday and caught one ball, the Seahawks bosses grew uneasy.

So they hired free agent Tony Moeaki, an ancient beast of 27, who had three good seasons as a starter with the Kansas City Chiefs before injuries temporarily derailed his career. Cleared to return to play last week, the Seahawks called his agent Sunday, Moeaki worked out Monday, was signed Tuesday and met reporters Wednesday.

Asked if he had acquainted himself, he said he knew Miller from their twice-yearly meetings when Miller was with AFC West rival Oakand, “and then I met Luke, and I met . . . (pause) Cooper.”

That would be Cooper Helfet, the third tight end. Or second, against Oakland. Whatever. Remembering everyone’s names at once, that’s hard to do around the Seahawks these days.

The Seahawks may have won the Super Bowl 10 months ago, but right now they are just trying to get the Benny Hill theme out of their heads.