Wilson claims his feet failed him vs. Raiders

Seahawks QB took the blame for poor footwork that led to one of his poorest game as a pro Sunday. He was too nice to say anything about the valiant, but overmatched, line. 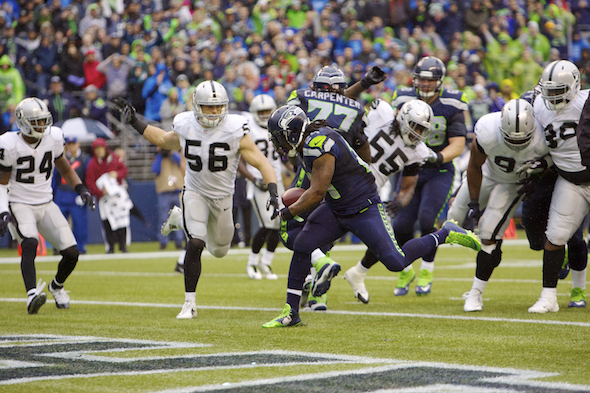 RENTON –Russell Wilson surprised some Sunday when he owned up to being mystified at his errant throws against the Raiders — he was 17 of 35 and should have been intercepted twice. By Thursday, he said the diagnosis by film produced the cause — poor footwork.

“Having great balance and having great footwork all the time—that’s what I work on,” Wilson said after practice. “That’s what I try to focus on every day so I’m looking forward to that.

“(Sailing the ball) is usually the case with any quarterback or anybody that’s throwing anything. I just have to work on a couple things. I was quick on a couple throws. I don’t know it’s anything that I really have to be worried about—I made a lot of throws and I can just hang in there a little bit longer.”

Left unsaid was that part of the reason his feet were moving so uncertainly was escaping the Raiders rush made easy by so many inexperienced replacements in the offensive line. The Seahawks in the second half, when they scored six points, had first-time subs at left tackle, left guard and center, with rookie Justin Britt at right tackle.

True to form, Wilson had no bad words for any of his teammates, but was looking forward to the presumed return of C Max Unger and LT Russell Okung Sunday for the 1:25 p.m. game against the New York Giants. Okung was a limited participant in practice with a calf injury, but Unger was full go after rehabbing a sore foot.

Unger “is great football player—one of the best centers in the NFL,” Wilson said. “He does a great job. He communicates extremely well, and he’s phenomenal. I think the other guys have really done a great job of stepping up, though.

“I think the (subs) have done a tremendous job. They’ve played some great football for us. That’s going to be huge for us down the road too—to have guys, in terms, like (Patrick) Lewis and (Steve) Schilling to be able to step into the game and have no hesitation and no fear—that’s big for us.”

The Seahawks welcomed back a myriad of key contributors for Thursday’s practice, but running back Marshawn Lynch didn’t participate with what was listed as a calf injury, a day after sitting out Wednesday’s practice to rest.

It isn’t time for Seahawks fans to panic yet. Lynch, arguably the most physical runner in the NFL, regularly sits out practice during the regular season to let his body recover from the beating it takes on Sundays. Any concern about his health is magnified by the fact he was Seattle’s best source of offense the win over the Raiders.

Lynch this season has emerged as one of Wilson’s favorite targets, amassing 223 receiving yards. He has 22 catches, which is tied for second on the team with departed WR Percy Harvin. He also has three receiving touchdowns to go along with 549 rushing yards and five touchdowns on 132 runs. He’s yet to miss a game.

“We want to use our good players,” Bevell said. “He’s definitely, probably the best player on our offense, and we want to get him the ball as many ways as we can. It’s easy to turn around and hand it to him, but he’s a phenomenal receiver. He runs really good routes. We just have to him out there.”

WR Doug Baldwin (groin) practiced Thursday for the first time this week, though it was in a limited capacity. Okung was also limited, but Unger was a full go.

“He’s the quarterback of the offensive line,” said right guard J.R. Sweezy. “You want to talk about mastering the offense, that guy knows it in and out. He just has to glance and he knows what everybody’s doing. To have a guy in there who can put you in the right spots is a big deal.

“It helps you get there a half-second faster and that’s the advantage that you need.”

CB Byron Maxwell, absent the last three games since sustaining a calf injury against the Cowboys, returned to practice in a limited capacity after missing almost a month. DE O’Brien Schofield also returned after a concussion.