As Seahawks coach Pete Carroll did with Percy Harvin, Huskies coach Chris Petersen saw star CB Marcus Peters’ insubordination as a threat to his control of the team. 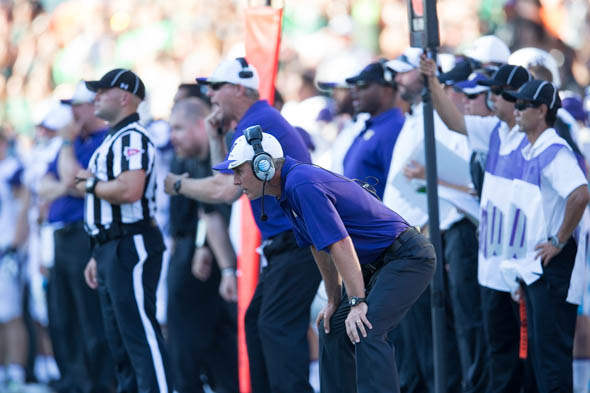 Only thing that disappointed me about the Marcus Peters episode is that Huskies coach Chris Petersen couldn’t find a way to trade him to the New York Jets. Some would say that’s impossible because the Jets are a pro team. Jets fans would argue otherwise. And I would argue that the Huskies and the rest of the Pac-12 are pro teams: The conference just approved cash payments to players beyond scholarship limits.

That discussion is for another day. But there is a parallel between the drastic deeds. Just as Seahawks coach Pete Carroll said he “couldn’t make it work” with Percy Harvin, so said Petersen Thursday regarding his tempestuous junior cornerback: “When you feel like it just can’t work, you gotta do what you’ve gotta do.”

These remarks are coach-speak for: “I gotta get this tumor outta here before he spreads.”

Carroll and Petersen fired high-profile players amid seasons that are below expectations, stirring controversy, scrutiny and potential disruption, because the miscreant players jeopardized entire operations.

Both coaches will feel some guilt for not having found another way, because now they must put every person in the organization in charge of keeping company secrets. That is never good. And both operations lost difference-making talent.

But after both coaches assessed that the risk of retention outweighed the reward, the episodes begin to differ. Perhaps the biggest difference is that Carroll invited known trouble by hiring Harvin. Petersen inherited known trouble from his predecessor.

Petersen more easily can shrug off the loss by implying — but never saying — Peters was not OKG, his pet acronym (Our Kinda Guy). What that means, beyond vague, cheery description typical about any recruit, is not specifically clear. But likely there is no allowance in the description for insubordination, which is the behavior that Carroll, Petersen and any coach interested in remaining employed, most fears and must eradicate.

Neither job allows tolerance for insubordination. Of the two, Petersen’s job is far harder.

Any college coach must create uniform discipline among 17-year-olds from several races, cultures, classes and varying degrees of wealth, training, education and ambition, nearly all of whom are away from home for the first time.

Frankly, that it works most of the time is remarkable. Success is largely due to the widespread delusion that most recruits believe they will play in the NFL. As long as the coach holds the mythological power to advance a player’s NFL ambitions, most of the potential rebels fall in line, grudgingly.

When a coach sees a genuine threat to that control, he has no choice but to act.

I don’t know specifics of Peters’ misdeeds, other than to read the latest news that he had a confrontation, presumably verbal, with an assistant coach Wednesday. I do know, as did all viewers of the Washington game with Eastern Washington in September, that Peters helmet-butted an opponent, drew a 15-yard penalty and subsequently had a helmet-throwing tantrum on the sideline, where he argued with a coach. Peters was benched for the rest of the game.

In light of Thursday’s developments, Petersen’s post-game remarks, which were followed by a one-game suspension for Peters, are worthy of review.

“I’m not into stupid penalties,” he said of Peters’ unsportsmanlike-conduct foul. “(Benching) is not even an issue for me. If guys aren’t going to conduct themselves right, then they’re not going to play. If you don’t play the way we want you to play, then you won’t play.

Petersen’s blunt remarks were the first public insight into his coaching priorities — he will not accept behavior from anyone that undermines his authority. Peters went way over the new coach’s line. My guess is he thought about firing Peters then, and probably regrets he didn’t, given what transpired.

But with eight other players already suspended or dismissed since he took over, he probably rationalized a second chance for Peters. It probably helped Peters that the secondary was the weakest unit on the team.

But not even that vulnerability was enough to save Peters this week. If the player’s insubordinate behavior with the assistant coach was rationalized again, the head coach would have been the object of mockery, and discipline would begin to evaporate.

Regarding Harvin, the fights with teammates that the Seahawks leaked to media were plausible reasons for the public to support his firing. But fights happen between teammates all the time. What happens far less, and is far more threatening, is a player’s refusal to play when told. That is a considered choice by a player, not a moment of foolish petulance on the field.

Peters, like Harvin, knew his behavior would put him in jeopardy, but both believed their football value protected them. Mistake. They overestimated themselves and underestimated their coaches.

As Petersen said the first time, it wasn’t even a decision for him. It was easy. He won’t say that now for public consumption, but it was true again. Smart coaches like Carroll and Petersen don’t act impulsively; they know that midseason firings of high-profile players come with some significant costs.

But there is no price greater for a football coach than a loss of control. When that is the choice, it’s easy.