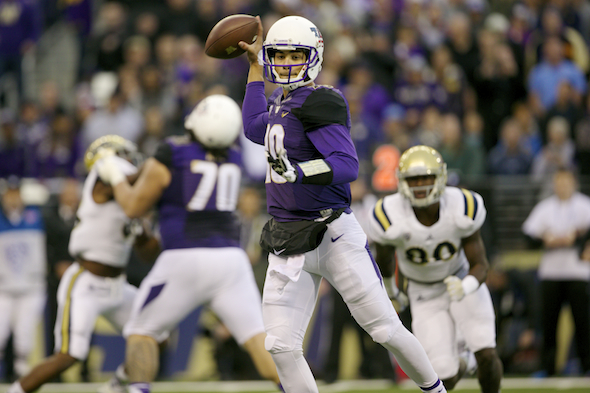 Washington quarterback Cyler Miles had little to offer in the passing game Saturday as the Huskies lost to UCLA 44-30. / Drew Sellers, Sportspress Northwest

If not for Shaq Thompson and John Ross III, UCLA might have administered a record beating to the Washington Huskies Saturday night. Even with Thompson and Ross both  starring on offense, defense and special teams, the Huskies didn’t have nearly enough to match the Bruins, who overpowered them 44-30 in front of 65,547.

Brett Hundley threw for two touchdowns and passed for two, Bellevue native Myles Jack scored his fifth career TD against UW, and the Bruins were never seriously threatened in winning for the 13th time in their last 16 meetings with the Huskies, who fell to 6-4 and face nationally ranked Arizona next week in Tucson.

The Bruins opened a 14-0 lead, the Huskies whittled the lead to 14-10, then UCLA ran away with it. The Bruins created separation in the second quarter when Jack, a linebacker on defense who scored four TDs against UW last year, entered on third down and broke four tackles en route to a 28-yard TD, pushing UCLA’s lead to 28-10.

Washington played catch up the rest of the game, but couldn’t overcome the early deficit.

“They (UCLA) are a good team, no question about it,” said UW coach Chris Petersen. “We had a slow start, and we’ve got to figure out a way to start a little faster. When you’re down by that much at halftime (31-10), it’s hard to stomach. The second half was fine, and I’m proud of our guys for that, but (the Bruins) got some easy, big plays on us and that’s tough.”

Missing CB Marcus Peters, thrown off the team earlier in the week, the Huskies suffered an additional defensive blow when NCAA sack leader Hau’oli Kikaha departed in the first quarter with a right shoulder stinger. With Kikaha out, the Huskies couldn’t get pressure on Hundley, who threw for 302 yards and helped the Bruins convert eight of 13 third downs. The Huskies went 5-for-14.

“We couldn’t get enough pressure on him (Hundley),” said Petersen. “When a guy knows that, he can hang in there and take his time, and he made us pay.”

While the Huskies ran for an impressive 211 yards, including 100 by Thompson, they fell woefully short in the passing game. Cyler Miles completed 14 of 24 for 155 yards. Miles found himself under constant pressure, but often couldn’t make throws when he wasn’t, either in the pocket or while on the run.

The Huskies were effective offensively when Thompson ran, but his opportunities were limited once the Huskies fell so far behind. Even another big play by Ross, a 100-yard kickoff return TD in the third quarter, didn’t help much, although it was spectacular — and historic.

After Hundley threw a 15-yard TD to Mossi Johnson, staking UCLA to a 38-13 lead, Ross, who played cornerback for much of the game, took the ensuing kickoff two yards deep in the end zone to the other end zone, the second such play of his career.

“We did a real good job blocking,” said Ross. “I told the guys, ‘Just give me open space and I’ll make it happen.'”

The 100-yard kickoff return by Ross in the third quarter was the fifth 100-yard play in UW history and the second 100-yard KOR of his career. He had his first against BYU in the 2013 Fight Hunger Bowl and is the only player in school history with two 100 KOR TDs. . . Ross has six touchdowns of 50 yards or longer during his UW career, including five this season. In addition to his 100-yard KOR return Saturday: 91-yard reception at Hawaii, 55-yard reception vs. Eastern Washington, 75-yard reception vs. Illinois, 86-yard reception at California . . . Before he departed the game in the first quarter, Kikaha had a sack and has 16.5 for the season, tops in the NCAA.

The Huskies travel to Tucson to face the Arizona Wildcats Saturday at 12:30 p.m. They will return to Husky Stadium Nov. 22 to face Oregon State.