Thiel: Minus Kikaha, Peters, Huskies had no shot

The firing of CB Peters was distracting, the injury loss of LB Kikaha was distressing, and having almost no downfield passing game was disabling for the Huskies Saturday. 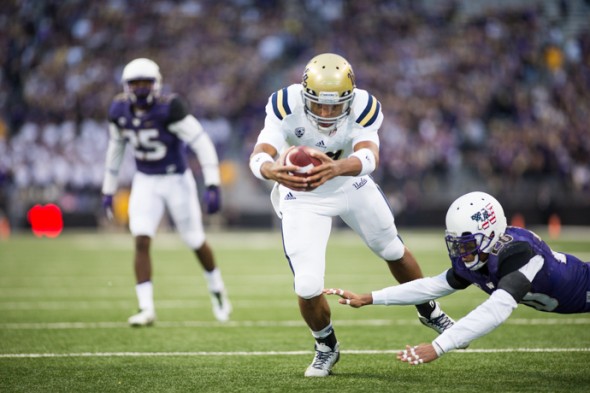 UCLA QB Brett Hundley scores one of his two rushing touchdowns in the Bruins’ 44-30 win over the Huskies Saturday. / Drew McKenzie, Sportspress Northwest

The only real chance the Huskies had against UCLA Saturday was to get to QB Brett Hundley before the Heisman Trophy candidate reached the tender vittles in the Washington secondary. Once their eminent pass rusher, Hau’oli Kikaha, left the game in the first quarter with a shoulder stinger, night came, the curtain closed and a third consecutive home game was lost.

A final count of 44-30 sounds somewhat respectable, but a mismatch was on from the start — probably from the moment Wednesday when coach Chris Petersen threw off the team his best pass defender, Marcus Peters, leaving three freshmen starters in the secondary.

When Kikaha, a second potential NFL draftee from the Huskies defense, left the game, the combined departures explained much of Hundley’s passing line — 29 for 36 for 302 yards and two touchdowns with no turnovers. Kikaha sacked him once. That was it.

“When Hundley doesn’t feel pressure, the game changes,” said a crestfallen Petersen, who watched his team fall behind quickly as it did against Colorado, Arizona State and Oregon while dropping to 6-4. “Coupled with (UW) being young back there (in the secondary), it’s not a good combination for us at all.”

The Huskies are 0-4 against the Pac-12’s top-ranked teams — Oregon, Arizona State and UCLA, plus Stanford, and go next week to Tucson to face a good Arizona team. UW certainly isn’t a terrible team — with winnable games against Oregon State and Washington State after Arizona, an 8-5 record is within reason — but little about Saturday’s game suggested progress.

Regarding Petersen’s reference to game-changers, probably the biggest change came on the first play of UCLA’s third possession, when Hundley took a deep shot that targeted Peters’ replacement, freshman CB Naijiel Hale. WR Kenneth Walker was so open on a post route, he was out of cell phone service range.

The 57-yard touchdown put UCLA up 14-0 and Washington never fully recovered, falling down 31-10 at the half before “embarrassment,” as Petersen put it, kicked in and helped the Huskies pick up 20 points and a bit of dignity.

“Hundley did a good job of hitting his checkdowns,” said defensive coordinator Pete Kwiatkowski. “We played more zone to try to take the pressure off those guys. He didn’t run as much as I thought he was going to (seven times for a net of 18 yards and two TDs) He stayed in the pocket and we didn’t get as much pressure on him.”

The offense wasn’t ready to play catch-up, even with Shaq Thompson (100 yards in 16 carries) in harness at running back. QB Cyler Miles had another so-so day, a few stellar passes mixed with poor judgments on some passes and some runs. It made for field goals on three drives instead of touchdowns, an impermissible shortcoming against a team as balanced and sound as 8-2 UCLA.

“We played a complete game — that’s what you want to be doing in November,” said Bruins coach Jim Mora, who when last seen coaching in Seattle had lost four in a row to end his first (and only) Seahawks season in 2009 at 5-11. Regarding your return, Jim? “It was a game. I’m happy my family was here, but other than that, I couldn’t care less . . . it doesn’t matter to me.”

He may not be a good pro coach, but he recruits and schools the youngsters fairly well. The Bruins were in control throughout, troubled only by Thompson and John Ross III’s 100-yard kick return.

Speaking of troubled, that’s what Washington was this week when it lost one of its premier players because he clashed with coaches, who, after at least the fourth known episode of incorrigibility or insubordination with Peters, figured they were better off without him, even knowing debacle was imminent.

While no one was directly admitting the episode was a distraction, logic says it was. Petersen acknowledged the trial.

“It was hard for everyone,” he said. Echoed Ross, who filled in most of the game at cornerback: “It hurt because Marcus is so good. He was like a big brother to us . . .  I know it’s a tough time for him. It’s a tough time for all of us. But we can’t hang our heads or anything.”

Said RB Deontae Cooper: “For the most part we handled it OK. It always sucks to see one of your brothers leave the team.”

“There were some players who were really close to him that I felt were kind of distracted,” DL Danny Shelton said. “But I think we did a good job of just rallying back up in the second half and just moving forward.”

It was the loss of Kikaha to injury that really threw the defense.

That was big,” said Shelton. “The upperclassmen were maybe trying to do Hau’oli’s job. But that was the wrong mindset.”

UW had an impressive 211 yards rushing, but getting downfield in the air was a large problem. Among Miles’ 14 completions, only seven went to wide receivers, and none to Ross, who had only two offensive snaps. His conversion to defense is an almost unbelievable signal that they’ve given up trying to give the ball to their most explosive player. Paging Percy Harvin.

Asked why it was so hard to get him the ball, Ross said, “We got a problem getting the ball to everybody.”

Ten games into the season, that summary is as accurate as it is bewildering.