The Seahawks set a franchise record with 350 rushing yards, including 140 by Marshawn Lynch, in their 38-17 victory over the New York Giants Sunday at the Clink. 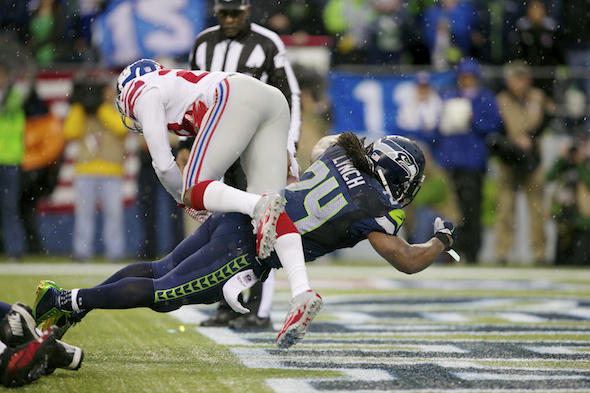 Marshawn Lynch busts in for one of his four touchdowns in Seattle’s 38-17 victory over the New York Giants Sunday at CenturyLink Field. / Drew Sellers, Sportspress Northwest

Besides a franchise-record 350 rushing yards Sunday at CenturyLink Field, which included 140 and four beastly touchdowns by Marshawn Lynch in a 38-17 thumping of the New York Giants, the Seahawks did themselves another favor. The result deflected a lot of questions/speculation about why Russell Wilson has, over the past few weeks, struggled so much as a passer: throws high and wild, behind receivers, a few seemingly aimed right at defenders.

What the Seahawks did to the Giants on the ground trumped what Wilson couldn’t do through the air and made for a third consecutive victory that was closer, for much of a drizzly afternoon, than the final score suggests.

With the score tied 17-17 late in the third quarter, Eli Manning had an opportunity, with a first down at the Seattle 39-yard line, to give the Giants a lead when he threw a ball to rookie Odell Beckham Jr. in the end zone. But Richard Sherman draped himself over Beckham and deflected Manning’s throw into the clutches clutches of Earl Thomas.

Thomas returned the pick 47 yards. From there, the Seahawks required only five plays before Lynch scored his third touchdown. The rout was on.

“When the ball is coming your way, you just make the play like in Pop Warner. It was good to get my hands on the ball. I was just Malcolm Smith this time,” said Thomas, referencing the Sherman tip to Smith in the NFC Championship against San Francisco last year.

Lynch added his fourth touchdown at 7:47 of the third and Wilson his fourth rushing TD of the season at the 5:19 mark. Seattle improved to 6-3 on a day when Arizona won again to improve to 8-1 and the San Francisco 49ers knocked off the Saints in New Orleans to stay close to the Seahawks at 5-4.

With Lynch running for 140 yards and Wilson adding 107, his third 100-yard rushing game of the season, the Seahawks broke the old team single-game rushing mark of 320, set against the Houston Texans Oct. 16, 2005. Seattle’s 350 rushing yards is the most in any NFL game this season.

Lynch’s four rushing touchdowns, aided in large part by the return of center Max Unger and left tackle Russell Okung, tied a franchise record done four times, most recently by Shaun Alexander in a 2005 game against the Texans. The Giants were simply helpless to stop the ground pounding. They couldn’t do anything with Lynch up the middle — he averaged 6.7 yards per carry — and couldn’t contain Wilson on the edge.

“We just had a huge day running the football, 350 yards, which is fantastic,” said coach Pete Carroll. “Marshawn was extraordinary, just incredibly good, and we’re proud of him. His toughness is there, his burst is there, his elusiveness is there and he’s playing as well as we’ve seen him.”

“A guy like that (Lynch) only comes around every blue moon,” said Thomas. “This guy is unbelievable when he gets his motor going. I’m om the sideline telling everybody, ‘Look at this guy run!'”

Wilson had one of the weirdest statistical games of his career. He ran 14 times, nearly matching his number of passes  (17). As he did last week against Oakland, Wilson struggled finding his targets. He threw two interceptions, one of which set up a New York touchdown, by throwing behind his receivers. He also overthrew a wide-open Jermaine Kearse in the end zone for what should have been an easy touchdown.

Wilson’s passer rating of 53.7 was even more ghastly than it was against the Raiders, 63.9, and he threw two picks for the second game in a row.

“We got a little loose with the football,” said Carroll, generously. “I don’t want to give them the football like that.”

“There are some things that I’ve got to fix,” said Wilson. “But I thought we were really up-tempo. That was our focus. We know we want to run the ball and be explosive in the passing game. With all the injuries we’ve had, we’re still finding ways to win games.”

Wilson, though, delivered one big pass play, a 60-yard completion to Kearse in the third quarter that set up a Steven Hauschka field goal to tie at 17. After that, Thomas made the game-changing interception on Manning, whose pick was his first in 176 consecutive pass attempts.

The Giants came in with three consecutive losses, but didn’t look the part. After Lynch and the Seahawks blew down the field on their first possession — Lynch caught a 23-yard pass and had a 14-yard run — and took a 7-0 lead one a one-yard run by Lynch, the Giants tied it at 7 on Manning’s six-yard TD pass to Preston Parker and took a 14-7 lead on an Andre Williams’ three-yard run.

“In the second half, we just controlled the ball,” said Carroll. “The momentum really shifted after Earl’s interception. I liked the way we finished the football game. We made the most of a two-game home stand.”

Lynch’s rushing TD tied the franchise record set by Curt Warner  vs. Denver Dec. 11, 1988 and matched by Shaun Alexander three times — vs. Minnesota Sept. 29, 2002, vs. Arizona, Sept. 25, 2005 and vs. Houston Oct. 16, 2005 . . . Wilson’s rushing TD in the fourth quarter was his fourth of the season . . . Seattle’s 350 rushing yards eclipsed the 2014 NFL high of 264 by Pittsburgh vs. Carolina in Week 3 . . . Wilson is now 9-0 against quarterbacks who have won Super Bowls and is the only quarterback to beat both Peyton and Eli Manning in back-to-back years . . . The Seahawks had two turnovers in the first half — a Wilson interception and a Robert Turbin fumble — marking the first time this season that Seattle coughed it up twice in one half . . . The Seahawks have won 25 of their past 33 regular season games and 19 of their past 21 at home . . . Christine Michael had 71 rushing yards, including a 45-yard run that set up Lynch’s fourth touchdown . . . DT Brandon Mebane suffered a right hamstring injury of undisclosed severity.

The Seahawks travel to Kansas City to face the Chiefs at 10 a.m. Sunday at Arrowhead Stadium for the first time since 2006 (FOX).