Over the past three weeks — since the Harvin trade — the Seahawks have returned to what they do best, delivering a ground beating the likes of which the Giants had not known. 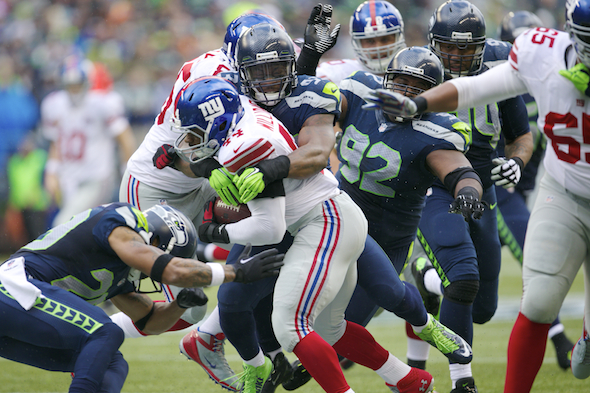 Everyone said that the Seahawks’ road back to the Super Bowl was going to be hard. But nobody said it would go through the Stone Age. After rushing for a club-record 350 rushing yards Sunday against the New York Giants, the Seahawks are more than happy to have chucked the Jetsons era for Bedrock.

The summary quote from the locker room: “Yabba. Dabba. Do.” (Look it up, kids.)

As to how the pounding the rock was perceived among the Giants, here is CB Dominique Rodgers-Cromartie.

“They line up and just hit you in the mouth,” he said. “They are more physical and they just want it more.

“I just know that can’t be the case. So that’s very disappointing.”

As the Twelves know, the Seahawks in the post-Super Bowl let-down have drifted — as have all of the past 10 champions. Whether the Seahawks admit it publicly, they know it too. Coach Pete Carroll knew it so well he fired the electric Percy Harvin, causing huge local and national controversy, to begin the course correction back to a run-dominant physicality that leaves the foe whimpering.

In the second half Sunday, armed with the returns from injury of C Max Unger and LT Russell Okung to help release the Kraken, er, Marshawn Lynch, the Seahawks re-asserted their primacy. No guarantee of sustainability is possible, but Carroll said he was certain the template has been re-set.

“I like where we’re going — I really do,” he said. “I told them last night I think we’ve made a big shift in the last three weeks. I was hoping it would happen again today. We’re playing the style of football that we want to play, that we’re most comfortable with,  then see if the other teams can deal with this.”

Magnificent as was Lynch — a brutal 140 yards and four touchdowns for a 6.7-yard average, “an MVP performance,” said Russell Wilson — credit also goes to a much-maligned line that, within itself, hailed the return of Unger from a four-week injury absence.

Unger is the brains, the cheerleader and the fixer among the big uglies. The void was palpable.

“Max is so vocal, especially for guys without a ton of experience,” said Cooper Helfet, the third-string tight end who will likely be a starter after an ankle injury to Luke Willson, who was already replacing Zach Miller. “He talks so much, you pick things up when you’re out there.”

“They’re just being nice,” he said. “I just came back and smoothed out the edges, made sure the communication was rock-solid. That’s what my job is.”

But he could not resist beaming over the club-record rushing yardage, the rare stat that brings glory to the O-line.

“That’s huge,” he said. “I don’t know if I have any other franchise record. But it’s funny. There were a lot of MAs out there (missed assignments). I didn’t play very well. It was rough. You make mistakes you haven’t made before. I need to get a couple of games under me.

“This was the longest stretch of games I’ve been out then comeback to play a pretty physical game. I only had about three practices over the four weeks. I’m exhausted.”

Most of the mistakes came in a first half that started with a sizzle and dwindled to drizzle. After opening with an 80-yard drive in six plays that finished with a one-yard Lynch TD run, the Seahawks’ next three drives consisted of 10 plays, including an interception and a fumble, which helped produce a 17-14 Giants lead at halftime.

But a pattern was emerging: The Seahawks were going to feed the Beast, and when they didn’t, Wilson’s read-option wizardry would do the rest, not his passing. By intermission, he threw the ball only eight times, completing five for 71 yards, but ran for 68 yards in six carries.

Above all, the Seahawks were going to do it fast.

“That was our focus,”Wilson said. “I thought we were really up tempo today.”

Combining Lynch’s slashes with the Giants’ own befuddlement over Wilson’s keepers, all at higher speed, New York’s will evaporated quickly. In the second half, the Giants were nearly helpless.

One of the Giants’ best defenders, SS Antrel Rolle, was stunned.

“I’d say it’s a little bit worse than embarrassing,” he said. “I’ve been playing this game for 10 years and I’ve never had anyone run for 350 yards on me.”

The defense joined in the shift in momentum, getting a spectacular end0zone interception and return from Earl Thomas as well as recovering a fumble. The Giants in the second half had 100 yards and no points, and finished the game with 54 yards on the ground a week after Oakland had 37.

Apparently starting with the Harvin trade, the Seahawks reverted.

“It’s almost like a polar shift occurred here, like it happened after the Tampa Bay game last year,” Carroll said. “We went back to the basics of who we are as a team. The players decided the were ready to take this next step.

We thought we were doing all right. But there was another big step to take. We’ve made that step.”

At 6-3, with a remaining schedule that amounts to seven weeks of football hell, the step back to the Stone Age future came just in time.