Gallery: Photo salute to a Beast of an effort

Despite nearing the age when NFL running backs are supposed to hit a wall, Seahawks RB Marshawn Lynch is on pace for a career year. 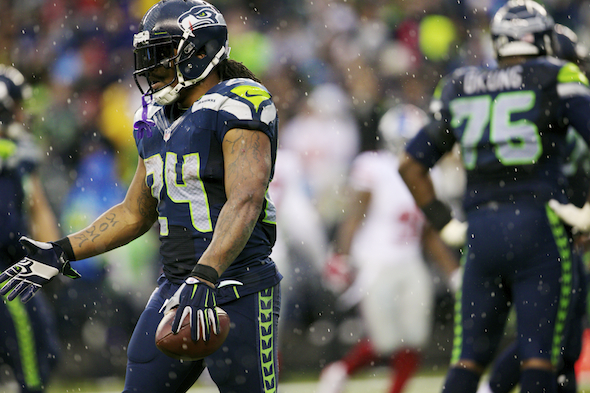 “We want to use our good players,” Bevell said. “And (Marshawn Lynch) is probably, definitely, the best player on our offense and we want to get him the ball as many times as we can.”

For the second consecutive week, Lynch was the focal point of the attack. It led to a career day. In the 38-17 win over the Giants Sunday at CenturyLink Field, Lynch had 21 carries for 140 yards (6.7 yards per carry) and a career-high four touchdowns, as the Seahawks set a franchise record with 350 team rushing yards.

“We give him an inch,” said right guard J.R. Sweezy. “And he makes something happen.”

“He’s having an MVP performance,” said Wilson after going 10 of 17 for 172 passing yards and two interceptions. “That’s what you want out of your star player.” 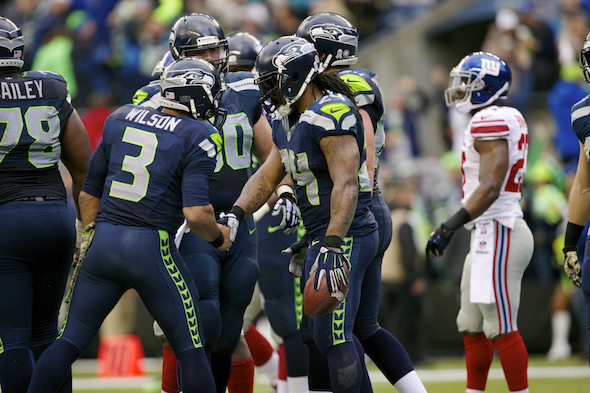 Lynch was aided Sunday by the return from injury of C Max Unger (foot) and LT Russell Okung (calf). Unger missed the past four games and Okung sat out last week’s win over the Raiders.

“They know this system like the back of their hand and when you got guys in there like that, Pro Bowlers, it obviously helps,” Sweezy said. “We were all on the same page today and it showed.”

Though Wilson ran 14 times for 107 yards and a touchdown, Lynch was probably the biggest benefactor of a healthier offensive line. He scored on runs of one, two, three and 16 yards.

And he got to twirl around on his head in the end zone. 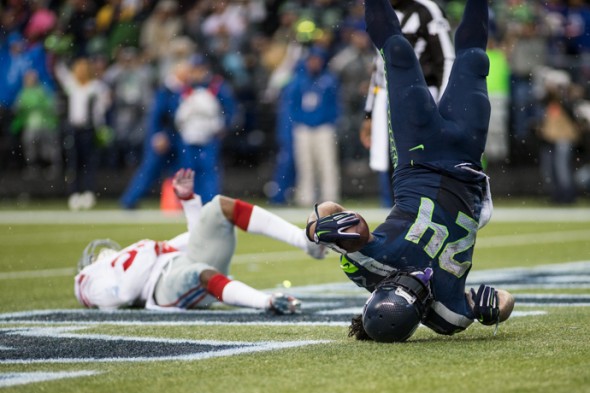 Behind Lynch, the Seahawks have won three in a row after beginning the year 3-3. / Drew McKenzie, Sportspress Northwest

Of course, Lynch and Wilson weren’t the only ones to run the ball with success. Backup RB Robert Turbin gained 32 yards on six carries (5.3-yard average) and third-stringer Christine Michael, the team’s first pick (second round) in the 2013 draft, busted four runs for 71 yards, including a 45-yard scamper in the fourth quarter to set up Wilson’s one-yard touchdown run that put the Seahawks up 38-17.

However, it all comes back to Lynch and Wilson. They used the zone-read play to near perfection.

“I think we’re tough to defend,” Bevell said. “With Russell Wilson’s ability to pull the ball and run, I think it’s trouble because of Marshawn Lynch.” 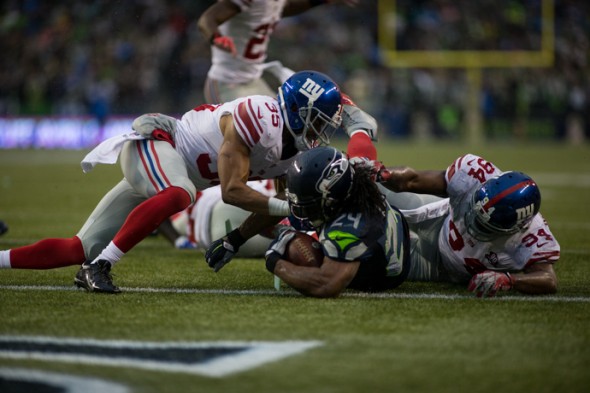 Lynch, 28, isn’t supposed to be performing at this level. Conventional wisdom says NFL running backs hit a steep decline as they approach 30.

That puts the Seahawks in an awkward predicament. Needing to sign Wilson this offseason to what will be close to a max deal, most assume Seattle will cut Lynch rather than pay him the $7 million owed on the final season of the four-year, $30 million deal he signed in 2012. If they choose not to, he’ll count $8.5 million against the salary cap next year.

Making the decision more difficult is the fact linebackers K.J. Wright and Bobby Wagner are eligible for free agency.

As rumors of Lynch’s potential departure after 2014 circulated this summer, he held out of training camp until the club agreed to advance him an additional $1.5 million for this season from his scheduled 2015 payout. 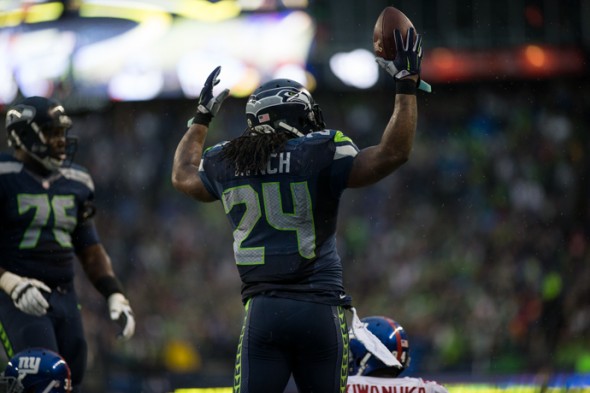