It’s been 36 years since an NFL team accomplished what the Seahawks — 350 rushing yards, five TDs — did Sunday in throttling the New York Giants at CenturyLink Field. 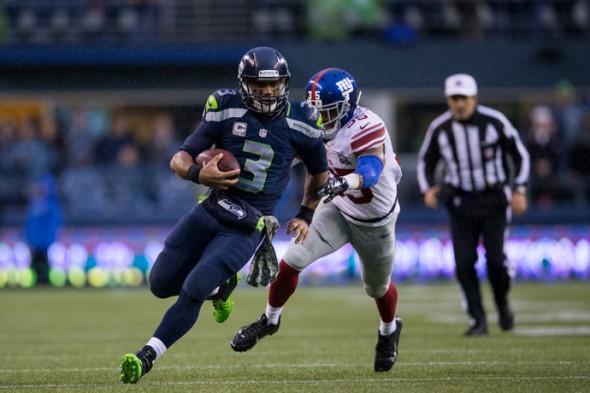 With all due respect to 43-8, surely the most unforgettable score in Seattle’s pro sports history, the most memorable tally in NFL annals, as well as the most lopsided victory, is 73-0. It occurred in the 1940 championship game won by Sid Luckman’s Chicago Bears over Sammy Baugh’s obviously overmatched Washington Redskins.

Coached by George Halas, the Bears also rushed for 382 yards and seven touchdowns at Washington D.C.’s Griffith Stadium. Bill Osmanski led the way with 109 yards, including a 68-yard touchdown on the second play from scrimmage, and Harry Clarke collected 73 and two, including a 44-yard run.

In the nearly 75 years since the Bears clobbered the Redskins, more than 12,900 NFL games (that total provided by Elias Sports Bureau) have gone into the books. In only six of those did a team approach Chicago’s staggering combination of 381 rushing yards and seven rushing touchdowns.

It took another 36 years before the sixth of those games happened — Sunday at CenturyLink Field, where the Seahawks, once coached by Knox, rushed for a franchise-record 350 yards and five touchdowns in a 38-17 victory over the Giants.

Listed chronologically, these are the only games in NFL-AFL history in which a team amassed at least 350 yards rushing and five rushing touchdowns.

In the famous “Beastquake” game against New Orleans in the 2010 playoffs, Lynch averaged 6.9 yards on 19 attempts, a mark inflated by his stunning 67-yard gambol to the end zone.

Lynch is creating quite a dilemma for the Seahawks. It’s generally assumed he won’t return next season on anything less than a three-year extension. Given his age (28), the Seahawks won’t want to do that, nor will be they want to absorb his $8.5 million 2015 cap hit. But the way Lynch is playing — after Sunday’s game, S Earl Thomas said, “A guy like that comes around only every blue moon” — it will be difficult for the Seahawks to let him go without a stiff public backlash. And perhaps one in their own locker room.

Via Elias, the Seahawks noted Sunday night that Wilson became the third quarterback in modern NFL history (since 1960), to produce three 100-yard rushing games in the same season. Wilson joined Billy Kilmer (1961) and Michael Vick, who ran for 100 or more yards in three 2004 games and in three 2006 games. Detailing those games:

Sunday marked the sixth time in Seahawks’ history that they featured two 100-yard rushers in the same game (Lynch 140, Wilson 107). Lynch and Wilson are the only running back/quarterback combination to accomplish the feat and they’ve now done it twice. On Oct. 6, 2013 at Indianapolis, both ran for 102 yards in a loss to the Colts.