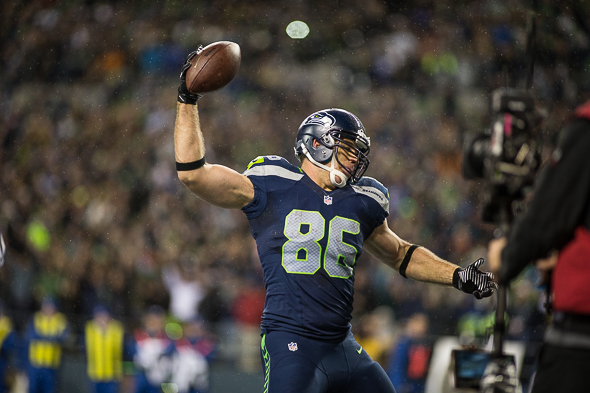 While it wasn’t a big surprise, the news Wednesday that veteran TE Zach Miller is done for the season — the 12th Seahawk to be put on injured reserve, he will undergo a second surgery on his injured ankle — adds another twist of weirdness to the 2014 saga of the Seahawks offense.

Absent Miller, heralded as a premier blocker, as well as LG James Carpenter, and using 285-pound newcomer FB Will Tukuafu, who hadn’t played in the previous two months with the 49ers, the Seahawks nevertheless rushed Sunday against the New York Giants for a club-record 350 yards and five touchdowns — a feat done only six other times in the past 74 years.

They are the No. 1 rushing team in the NFL at 171 yards a game, a few weeks after being criticized for an inability to run the ball.

Meanwhile, QB Russell Wilson, NFC player of the week for throwing for 300 yards and running for 100 yards in a loss at St. Louis (110 passer rating), hasn’t had a passer rating above 77 since then — all victories.

Now, after beating three teams (Carolina, Oakland, NY Giants) that appear to be sinking fast, the Seahawks go to a hard place on the road, Arrowhead Stadium, to face a 6-3 Chiefs’ team that is the lone outfit that has yet to give up a rushing touchdown this season.

What’s an offensive coordinator to do? Run? Pass? Pooch punt? Get hit by pitch?

“It will be a good challenge for us,” said Seahawks OC Darrell Bevell, hiding behind bullet-proof coach-speak. “They’re really solid. They’re about top in every important category, whether it’s third-down, red-zone, rushing and passing.”

If they are as good as Bevell says, it seems less likely the Chiefs defense will be bedeviled by Seattle’s adroit use of the read option, as was New York. Much in the way of a traveler in a bed-bug-infested hotel, the Giants are still inspecting clothing and hair, looking for that creepy-crawly Wilson.

Coach Pete Carroll said Wednesday that although the Seahawks always want to be run-first, he did not order up the avalanche.

“It’s just been available — that’s all,” he said. “We’re not trying to run him anymore. There’s no intent there to get him more carries. We’re just running the offense. Most of his stuff happens because it’s available and the read takes him there.

“He had big games off the true naked (bootlegs) a couple times (Washington and the Giants). As long as he continues to avoid getting hit, we’re fine. He’s done a very, very good job of that. We really trust him in that regard.”

The tight end and his various roles have always been integral to Carroll’s offenses. While a case can be made that Miller’s absence must have been covered in order to rush for 350 yards, Carroll made the point that Miller was good at everything, and now the Seahawks must play the newbie tight ends in ways specific to their talents.

“Zach was a very, very experienced player that did all kinds of things,” he said. “He played fullback, he could lead on plays, he could block on the edge, we could split him out and do things. He had such great background in our system and knowledge and really command of so many different things.

Now, he has two young tight ends, Luke Willson and Cooper Helfet, each of whom was banged up Sunday, plus two new hires, Tony Moeaki and RaShaun Allen, to do what Miller did mostly on his own.

“Willson and Helfet had a lot of ground to make up to catch up to Zach,” he said. “Both guys have improved with their play time. Luke has really done a very good job. He’s making really good progress. We’ve been able to run the ball with both guys. There was a little time in the first couple weeks where we struggled a little bit, but those guys started to add in.”

Going back to mini-camp, the Seahawks have used the injured reserve list a dozen times in 2014, mostly on backups but now three starters:

Miller had surgery after the week 3 win over Denver, and was estimated to be out four to six weeks but “it never really responded the way that they had hoped,” Carroll said. He’s under contract through 2015 . . . To fill Miller’s spot on the 53-man roster, the Seahawks brought back a familiar face — LB Allen Bradford, who was on Cleveland’s practice squad and got the call while he was at a Toys R Us store with his two kids. He arrived in about 16 hours. Bradford was a running back at USC under Carroll . . . Heard the report that the Seahawks tried to talk retired WR Randy Moss into returning after the Percy Harvin trade? “Glad you asked — that never happened,” Carroll said. But he did joke that he might have received a call from Terrell Owens, who had a tryout with the Seahawks a couple of years ago . . . The injury report Wednesday had six players not practicing: LG James Carpenter (ankle), TE Luke Willson (ankle), CB Marcus Burley (hamstring), RB Marshawn Lynch (calf), LB Brock Coyle (gluteus strain), Michael Bennett (not injury related). Listed as questionable were TE Cooper Helfet (knee), LB Malcolm Smith (groin), CB Jeremy Lane (groin) . . . After missing two games, SS Kam Chancellor was a full go.