Felix Hernandez of the Mariners was the favorite to win his second AL Cy Young Award, but one awful inning in Toronto Sept. 23 cost him the trophy. 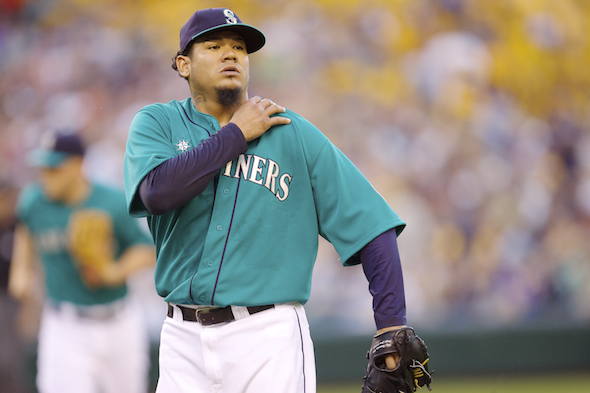 Had it not been for the fifth inning in Toronto Sept. 23, Felix Hernandez probably would have celebrated his second American League Cy Young award Wednesday. Even with that forgettable fifth, now destined to long remain a painful memory for Hernandez and the Mariners, King Felix seemed a likely winner of baseball’s most prestigious pitching award.

Felix had all the stats. He had better numbers overall than finalists Corey Kluber of the Cleveland Indians and Chris Sale of the Chicago White Sox. Felix also had better numbers than in 2010 when he won his first AL Cy Young. But that fifth inning in Toronto ultimately proved the difference in Kluber winning the Cy by a 10-vote margin, 169 to 159.

“I don’t know what to say — that was tough,” Hernandez said Wednesday afternoon at a Safeco Field press conference that was less celebratory than expected. “I was a little disappointed, but it will just give me more motivation to work harder and just be better next year.”

This is the second time Hernandez finished second in the Cy Young vote, and it came after a season that Hernandez described Wednesday as “the best overall” of his career.

The .243 opponent OBP is the third-lowest by an AL pitcher in the designated hitter era (1973). Or go back before the DH. In 1968, Denny McLain won 31 games. That year, McLain took the Cy Young unanimously with the same .243 opponent OBP that Hernandez just recorded.

King Felix allowed two or fewer runs in 25 starts to lead the league (Kluber second with 23), and in 13 no-decisions posted a 1.88 ERA while receiving a 2.09 run-support average.

Perhaps above all, Hernandez established a major league record between May and August of 16 consecutive starts with two or fewer runs allowed in at least seven innings pitched, breaking the mark of 13 by Tom Seaver of the 1971 New York Mets.

But ultimately, King Felix couldn’t erase from the minds of Baseball Writers of Association of America voters what happened Sept. 23, when he entered the fifth inning at Rogers Centre with the Mariners in the thick of the wild card race.

Hernandez carried a 2-1 lead and a streak of 11 consecutive retired batters with him as he took the mound in the fifth. Suddenly, he flipped on a dime, sealing his Cy Young fate.

Wary of walking rookie outfielder Dalton Pompey, Hernandez grooved a 3-1 fastball that Pompey hammered for his first career home run. That tied the game at 2-2 and spurred a seven-run inning in which the Blue Jays sent 13 to the plate. Hernandez didn’t escape the 44-pitch inning until the Mariners turned a double play on Munenori Kawasaki’s soft ground ball.

In the worst of his 2,000-plus career innings spanning a decade, Hernandez was charged with eight runs in the Mariners’ 10-2 loss. That all but killed their wild card chances.

But the damage was done. The inning stuck in the minds of BBWAA voters, who apparently decided that, in the biggest regular-season game of his career, with a playoff berth on the line, Hernandez not only came up short, but was shelled.

Put another way, Hernandez pitched like a Cy Young winner for 235 innings in 2014. One additional inning, the fifth at Toronto, cost him.

Kluber went 18-9 with a 2.44 ERA in 34 starts and is a deserving Cy winner. He also won his only matchup with Hernandez, July 3o in Cleveland, 2-0. Hernandez allowed two runs over seven innings, but Kubler allowed three hits and no runs over nine.

“He beat me. He had a great year,” said Hernandez. “Sale, Kluber, myself, we all deserved this award. But there’s only one winner. So it’s Kluber.”

Kluber, as well as Sale, trailed Felix in ERA, WAR for pitchers, WHIP, innings, and in all the other important pitching stats. But Kluber never had a single meltdown.

Had Felix “melted” on any other day, or in any inning other than the fifth Sept. 23, his next-to-last start of 2014, he would have won. Hernandez didn’t dwell on that Wednesday.

“It was just one start,” Hernandez said. “What can I say?