Thiel: There is a toll in the ‘run, Russell, run’ play

The Seahawks are missing players who accounted for 46 percent of the receptions in 2013, so inexperience is another reason QB Russell Wilson must run — perhaps too much. 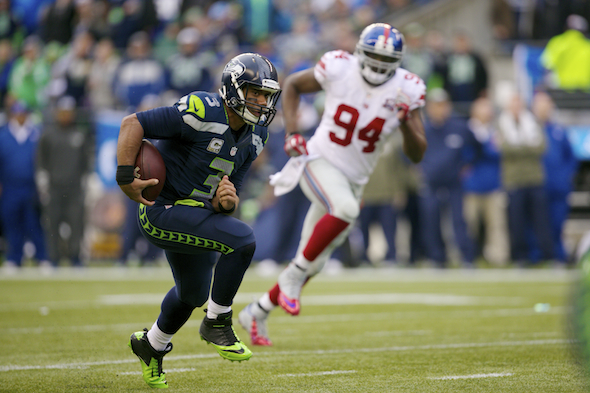 Russell Wilson befuddled the Giants with the read option, but all that running takes a toll. / Drew Sellers, Sportspress Northwest

No Golden Tate. No Percy Harvin. No Sidney Rice. No Zach Miller. No Derrick Coleman/Michael Robinson.

Their collective receptions in 2013 were 46 percent of the Super Bowl champions’ regular season total. Additionally, Tate was the best down-field blocker and Miller was the best pass-protection blocker.

Thanks to retirements, injuries, free agency and a colossal trade bust, the Seahawks’ passing game of the moment has shriveled. The absence of premium, experienced talent is one part of why the Seahawks have the second-fewest passing attempts in the NFL. Another part is, of course, the Seahawks are a run-first (and -second and -third) team; they finished next to last in 2013 too, and it worked out OK.

“The connection is not really there yet,” said rookie receiver Kevin Norwood, who is attempting to help fill the void, of his experience with QB Russell Wilson. “It’s still taking time. It takes awhile, and I missed a big part of the preseason (with an injury). I think we’re getting close.

“It takes a heck of a lot of practice. It’s not something that comes automatically to first-year guys.”

The “next man up” slogan is nice, but rarely in the NFL is it plug-and-play. A year ago, the Seahawks didn’t pass often, but they passed well; Seattle’s 8.4 yards per pass attempt was second in the league behind the 8.7 of Philadelphia. So far this season, the Seahawks get 6.1 yards per attempt, tied for 19th. In total yards, they are last at 1,750, 10 yards behind Kansas City, the opponent at 10 a.m. Sunday at Arrowhead Stadium.

By his own admission, Wilson has been off lately; four consecutive games with a passer rating under 80. He takes some of the blame for inaccuracy, ascribing it to inadequate footwork and rushing some throws.

He never publicly puts off responsibility to others. But the fact is, a lot of knowledge and experience at the other end of the pass has been lost.

Which is why the Seahawks were especially thrilled that the New York Giants Sunday looked upon Wilson’s frequent keepers on the read option (107 yards in 14 carries) as if they were learning Mandarin.

Getting chunk yardage via Wilson’s feet is currently more reliable, but the Seahawks won’t admit it’s by design.

“It’s just been available — that’s all,” Carroll said. “We’re not trying to run him any more. There’s no intent there to get him more carries. We’re just running the offense. Most of his stuff happens because it’s available and the read takes him there. It’s not because we’re designing running plays for him and he’s running the sweeps and stuff like that.

“As long as he avoids getting hit, we’re fine. He’s done a very, very good job of that again.”

By intent or happenstance, the upshot is that Wilson, with 500 yards, is 15th in the NFL in rushing yards, ahead of running backs such as Green Bay’s Eddie Lacy, Atlanta’s Steven Jackson and Indianapolis’s Ahmad Bradshaw. He’s only 33 yards behind the Chiefs’ star, Jamaal Charles.

More impressively, he leads the NFL in yards per attempt, his 7.6 average way ahead of the 5.4 of No. 2, ex-Seahawk Justin Forsett of Baltimore.

But all that running has a consequence, even if he never takes a consequential hit. Particularly on consecutive runs of distance, any quarterback, no matter his fitness, may need a little time to calm down, something that the play clock doesn’t permit.

When I asked him, at first he denied any toll, then got around to the humanity of it.

“I do think your adrenaline is going a little bit more (but) I’ve done this ever since I was a young kid. I’ve been able to scramble. I think I’m used to it. But one thing you have to figure out and make sure you know, is stay calm and stay poised. That’s part of it, because your adrenaline is running so high from running around from all those big guys.”

No guys are as big and fast as NFL defenders. In order to keep himself intact, Wilson runs full out most of the time. So it’s hard to imagine, after a pair of runs, that Wilson can drain his adrenaline sufficiently to thread passes in tight windows.

It’s a little like the biathlon in the Winter Olympics, where cross-country skiers race on a course where they suddenly have to flop and fire rifles at distant targets. Managing heart rate is everything. And they’re not being chased by bears.

To complicate matters, Wilson’s targets this season aren’t as sure where to go to help the QB. Norwood and fellow wideout Paul Richardson are rookies, tight ends Luke Willson and Cooper Helfet are second-year guys, and new fullback Will Tukuafu just fell off the truck from San Francisco. (The street lost that one, by the way; he goes 285.)

Norwood said there’s much for him to learn.

When he was in college at Alabama, he and star QB A.J. McCarron were classmates who worked many hours in tandem.

“We started on the scout team together as freshmen,” he said. “We had a connection.”

He’s sorta back on the scout team again, only this time he has to emulate premier veteran pros who’ve been lost, and do it in live action in front of 75,000 hostiles in the Midwest snow and cold.

While his quarterback is chased by bears.