Gaffe-prone Huskies give it away to Arizona, 27-26

The Washington Huskies had multiple opportunities to put away No. 14 Arizona Saturday in Tucson, but couldn’t stop making mistakes that led to a 27-26 loss. 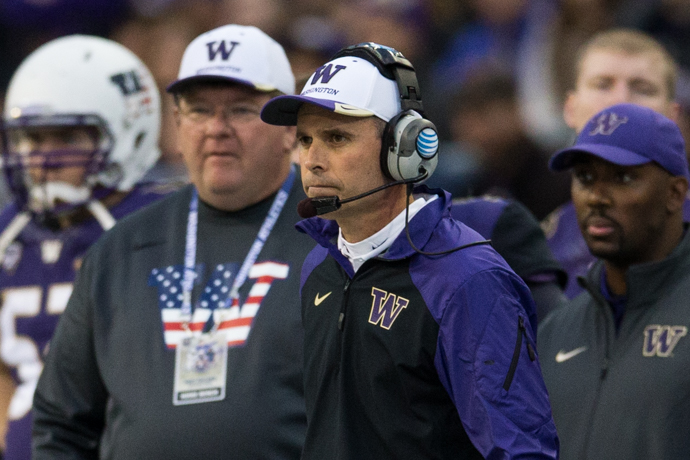 No one would blame Chris Petersen if he didn’t pine for the good old days at Boise State, where he piled up victories as a matter of course. All of that is history. His Huskies Saturday made enough gaffes to lose five games, but didn’t officially expire until 0:00 on the clock when Casey Skowron kicked a 47-yard field goal to give No. 17 Arizona a 27-26 victory over Washington, a loss that jeopardizes its bowl chances.

UW fell to 6-5 overall and 2-5 in Pac-12 play. With games remaining against Oregon State and Washington State, the Huskies are still one win shy of bowl eligibility. Even if they win out, eight might not be enough to earn a bowl invitation. The Pac-12 has seven slots available, but as many as 10 teams could wind up bowl eligible.

But on a first-down rush, senior RB Deontae Cooper coughed up the ball in a scrum, Arizona recovered and drove 15 yards in six plays for Skowron’s winning field goal as time expired.

Self-inflicted mistakes crushed the Huskies, the most glaring a botched snap on an extra-point attempt in the third quarter following a Dwayne Washington one-yard touchdown run. Instead of leading 27-21, the Huskies led 26-21. Skowron nailed two threes in the fourth quarter for the win.

Washington had multiple opportunities to put away the nationally-ranked Wildcats but couldn’t get out of its own way.

Early in the second quarter, the Huskies marched to the Arizona 18 and had a chance to score a touchdown, but quarterback Cyler Miles lost his grip on the ball — a classic soap dish play — while attempting to pass and Arizona recovered the fumble.

Cooper had touchdown run called back midway through the second quarter on a holding penalty. Then, near the end of the first half, Washington stopped Arizona on downs, but SS Brandon Beaver was flagged for a holding penalty that gave the Wildcats another play. Skowron took a direct snap on a fake field goal attempt and ran 18 yards for a touchdown.

Less than a minute later, Miles bobbled briefly a bad snap from center and a moment later inexplicably dropped the ball. Arizona recovered and scored again, Nick Wilson running in from eight yards out. Arizona’s two TDs in a span of 1:31 lifted the Wildcats from a 17-7 deficit to a 21-17 lead.

Van Winkle’s 31-yard field goal got Washington within 21-20 early in the third quarter, and Dwayne Washington’s one-yard run provided UW with a 26-21 lead at 2:45 to go in the third.

But the Huskies had not quite spanned their gamut of goofism. At converted cornerback John Ross III’s expense, Solomon completed a 63-yard pass to Trey Griffey, son of the Mariners star, that set up a Skowron field goal to close to 26-24.

After that, all the Huskies needed to do was avoid the big mistake, but Cooper, ordered to run instead of kneel, couldn’t hang on to the ball.

The Huskies drew three penalties in their first six plays and had 13 for 111 yards to Arizona’s two flags for 14 yards.

Miles completed 20 of 29 for 233 yards and ran 15 times for 34 yards, often keeping drives alive with third-down scrambles. Washington had his best game, running 19 times for 148 yards, including a 66-yard touchdown in the second quarter. Marvin Hall, on a pitch from Miles, threw a 36-yard TD to TE Joshua Perkins in the first quarter.

Washington (148) surpassed 100 rushing yards in a game for the second time in his career. He had 141 and two TDs against Oregon State in 2013 . . . All-America candidate Shaq Thompson played linebacker the whole game instead of running back . . . Kasen Williams, finally emerging from the long shadow of injury led UW with five receptions. Jaydon Mickens caught four for 69 yards . . . The Huskies fumbled six times, losing three . . . The Huskies are19-11-1 all-time vs. Arizona.

Washington plays Oregon State in the next-to-last game of the regular season at 7:30 p.m. Saturday at Husky Stadium.