The Seahawks (6-4) twice flopped on fourth down when they had scoring chances Sunday and lost to the Kansas City Chiefs 24-20 at Arrowhead Stadium. 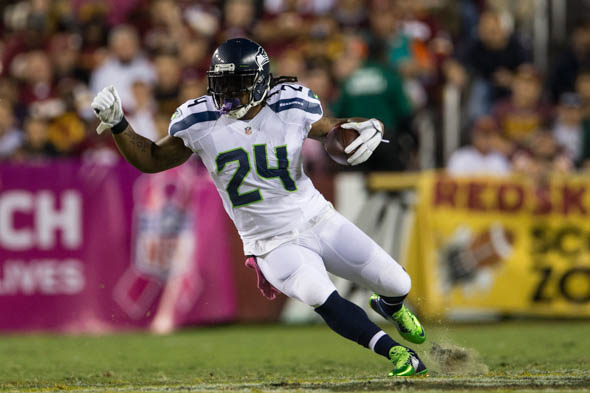 Trailing 24-20, the Seahawks had a near-perfect set-up for victory Sunday at Arrowhead Stadium: Second and five at the Kansas City 40, 6:15 to play, Marshawn Lynch already with more than 100 yards, Russell Wilson too elusive for Kansas City to catch. But in a moment of offensive confusion/indecision as the Seahawks tried to set the next play, they drew a delay of game penalty that ultimately proved fatal.

Set back five yards and able to gain only two on a Lynch run, Wilson used third-and-eight to fire a slant over the middle to Jermaine Kearse that officials initially ruled a first down. But Chiefs coach Andy Reid successfully challenged the spot, forcing the Seahawks into a fourth-and-one.

With C Max Unger having been carted off the field a series earlier with a sprained ankle, the Seahawks went nowhere on the play, the Chiefs stuffing Lynch for no gain. Seattle’s last hope of beating Kansas City effectively ended there. Done in by another pre-snap penalty (the Seahawks lead the NFL in that category), the Seahawks (6-4) fell 24-20, ending their winning streak end at three.

That was one of three times in the fourth quarter that the Seahawks couldn’t convert on fourth down. Within sight of a touchdown on the Kansas City two-yard line with 7:11 remaining, Wilson threw incomplete in the end zone to Doug Baldwin, who called wildly for interference. The refs saw incidental contact.

On a last-chance drive just outside of a minute, Wilson couldn’t connect on fourth-and-18 with Paul Richardson and Kansas City ran out the clock.

Coming off a 350-yard rushing performance against the New York Giants, and with Lynch pounding for 124 on 24 carries, the Seahawks rolled up 204 more Sunday. Where the Seahawks rushed for five scores last week, against the Chiefs they collected none (Kansas City ran its streak to 10 games of not giving up a rushing touchdown).

Meanwhile, the Chiefs pounded the Seahawks for 190 yards of their own, including 159 and two touchdowns by RB Jamaal Charles, who sandwiched scoring runs of 1 and 16 yards around Wilson’s seven-yard touchdown pass to Baldwin.

After Steven Hauschka kicked field goals of 24 and 27 yards, pulling the Seahawks to 14-13 at halftime, the Chiefs increased the lead in the third on a 23-yard Cairo Santos field goal. They had an opportunity for more points after officials ejected Seattle’s Ricardo Lockette after he lost his head and took a foolish swing at Kurt Coleman — a penalty that gave Kansas City good field position at its 44.

The Seahawks didn’t suffer from that gaffe. Earl Thomas forced a fumble that Kam Chancellor recovered, and the Seahawks required only five plays for a touchdown on a one-yard fling from Wilson to newly signed TE Tony Moeaki, his first catch as a Seahawk. That gave Seattle a 20-17 lead.

With Seattle’s help, the Chiefs retaliated immediately. After Knile Davis returned the kickoff 24 yards, Charles burst for 47. On the play, Seattle’s Bruce Irvin was charged with  a personal foul, although the likely culprit was Chancellor (jersey 31 mistaken for 51). The penalty added 15 to the Charles run, and Davis scored from a yard out, lifting the Chiefs to a 24-20 lead.

After the Seahawks failed on their first fourth-down attempt, they pinned Kansas City at its one-yard line and forced the first Chiefs’ punt of the game. But the next Seattle drive resulted in the second botched fourth-down play, which never would have been run without the delay of game penalty.

Seattle’s final drive, which began with 2:47 left and the Seahawks out of timeouts, started at the four-yard line. Going for the 14th fourth-quarter comeback of his career, Wilson almost miraculously escaped getting tackled in the end zone, buying the Seahawks a yard with a short pass to Lynch. Wilson completed a 23-yard pass to Baldwin to the Kansas City 27, but couldn’t hit Cooper Helfet twice or Richardson on three other throws, ending Seattle’s chance.

Wilson broke his streak of four consecutive sub-80.0 passer ratings with a 98.2 and added 71 rushing yards. Lynch’s 124-yard performance was his third above 100 yards this season.

Seattle’s 90-yard scoring drive early in the second quarter was its longest of the season . . . The Chiefs’ opening TD drive encompassed 15 plays and 86 yards. The play total tied for the most in a drive against the Seahawks this season (Cowboys), and the 86 yards are the most allowed on a drive this season . . .  Temperature at kickoff was 19 degrees, the third-coldest Seahawks game. They played in 16 degrees at Denver Dec. 3, 2006 and 18 degrees at Green Bay Dec. 27, 2009 . . . When Charles scored the game’s first touchdown, it marked the first time since 2012 that the Seahawks surrendered an opening-drive touchdown (29 games) . . . Wilson is 30-12 as a starting quarterback . . . Seahawks are 5-21 all-time at Arrowhead Stadium.

The Seahawks return to CenturyLink Field Sunday for the first of two games against the Arizona Cardinals. Kickoff is 1 p.m. on FOX. The Seahawks and Cardinals face off Dec. 21 in Glendale, AZ.