Seahawks RB Marshawn Lynch told former teammate Michael Robinson he was unable to walk to the locker room during halftime of Sunday’s game. 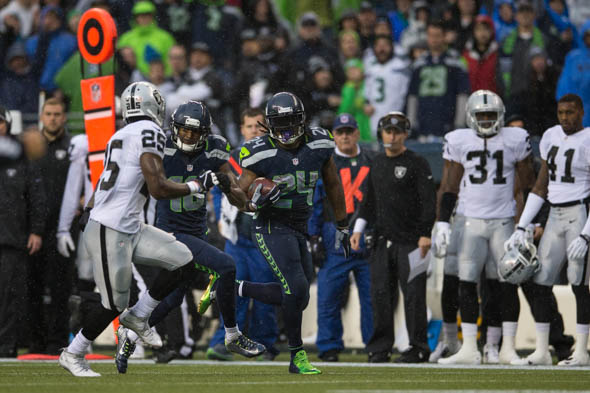 As with the Seahawks’ passing game, coach Pete Carroll’s relationship with running back Marshawn Lynch has issues. Carroll fell just short of admitting there is tension between him and his star player Monday during his weekly appearance on 710 ESPN’s Brock and Salk radio show.

“We’re working through it. Marshawn is a very private person,” Carroll said. “We’ve all learned that, and we’ve respected that about him for years. I respected the heck out of that when we got to the Super Bowl last year and everybody was clamoring. He is a very unique, special person.”

After rushing for 124 yards on 24 carries Sunday in the Seahawks’ 24-20 loss to the Kansas City Chiefs, Lynch again ignored his collective bargaining agreement-mandated media obligations, instead giving a phone interview with NFL.com’s Michael Silver while on the team bus near Arrowhead Stadium.

Asked by Silver if he believes the Seahawks plan to release him after the season instead of paying him potentially $7.5 million he can earn in 2015, Lynch said he wasn’t sure. Working against him: He turns 29 April 22, and next season marks the final of the four-year contract extension he signed in 2012.

“I don’t know, man. The Seahawks, their front office gets in the media; they talk a lot. I don’t talk too much. I just play the game,” Lynch told Silver. “If they have something going on, I don’t know about it.”

Citing a source close to Lynch, Silver’s article goes on to say the numerous reports swirling around Lynch’s future have caused his relationship with Carroll to deteriorate. Ian Rapoport of NFL.com said last month said the Carroll and Lynch don’t communicate.

“Pete’s my head coach,” Lynch said Sunday when asked about the relationship. “I mean, you know, he’s really not in my position meetings . . . it ain’t like we get to chop it up like that.”

Perhaps thinking he was unlikely to see the final year of his contract, Lynch held out of training camp in late July in search of more money. The Seahawks eventually budged and restructured his deal, taking money he was slated to make in 2015 to bump his salary in 2014 from $5 million to $6.5 million. Lynch reported to camp and has played in all 10 games while dealing with assorted bumps and bruises, amassing 813 rushing yards and 12 touchdowns (nine rushing, three passing).

He failed to score a touchdown Sunday and was stopped short on a critical fourth-and-1 in Chiefs territory late in the fourth quarter, but was also battling injury. At halftime, he stayed on the Seahawks sideline instead of going to the locker room, as team personnel tended to his sore back. NFL.com said Lynch told former teammate Michael Robinson, now an analyst with the network, that it was because he was unable to walk.

“He had a little episode there,” Carroll said during his Monday press conference. “He tightened up. He’s had back issues well before we ever got him and he’s always been able to manage it. It’s really only kept him out of one game in our history. But it’s an ongoing process for him. He knows it better than any of us and he knows how to deal with it.”

Carroll characterized Lynch’s injury situation as classic wear-and-tear on a running back with his bruising style. He said he had no problem with Lynch staying out of the locker room at halftime, while Silver’s article indicated it was another example of Lynch’s disconnect with the coaching staff and management.

Carroll has nothing on DEA ‘visit’

After the game, the Seahawks were visited Sunday at the Kansas City airport by federal drug enforcement officials as part of a league-wide investigation into potential abuse of prescription painkillers, stemming from complaints in a lawsuit from a group of former players alleging that NFL team medical staffs mishandled the drugs. No arrests were made. The investigation is ongoing.

The DEA also checked the Tampa Bay Buccaneers and the San Francisco 49ers Sunday, though, according to the report, specific teams weren’t targeted.

Federal investigators asked for documentation for controlled substances and checked to see if visiting teams medical staffs were licensed to practice in the states they were playing, according to the Associated Press.

“Really, there’s nothing I can say because the league has already commented about it,” Carroll said Monday. “I wouldn’t know what to tell you but they did visit us, and we took care of business and compiled with everything they needed.”

Wagner set to return; Unger out for season?