Huskies coach said he looked at final sequence against Arizona “105 times” and still would have done it the way he did it. Good luck explaining to to parents of recruits. 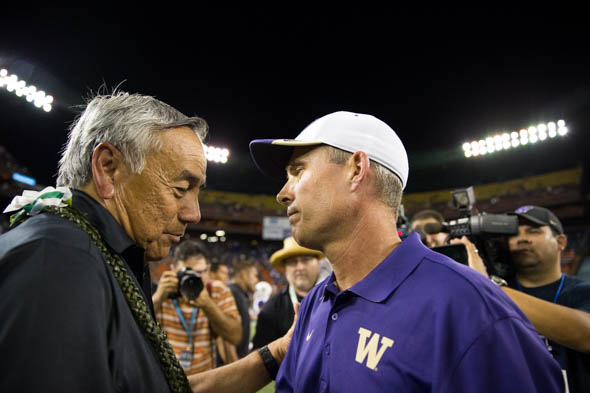 Remember when Chris Petersen figured out how to beat Hawaii’s Norm Chow by one point? He may not remember either. / Drew McKenzie, Sportspress Northwest

Misdirection is a vital part of offensive design in football. The defense has to think one way, and the offense that thinks another usually wins the day. So perhaps Chris Petersen won Huskies’ weekly presser.

The game Saturday at Arizona? No. Still lost. Can’t turn back the, um, clock. Then again, perhaps any expression that involves clocks should be avoided in Montlake.

“I’ve looked at (the final 90 seconds) about 105 times, second-guessing it,” Petersen said Monday. “If I had to do it again right today, I’d do the same thing.”

When many, if not most, media members expected Petersen to fall on his sword over the debacle in the desert that allowed 14th-ranked Arizona to beat the Huskies 27-26 on a field goal with no time left, Petersen defended his strategy that provoked a storm of criticism.

He was convinced that running the ball at least once in the Huskies’ final possession, rather than a victory formation of three kneel-downs that may have left a few seconds on the clock, was the lesser risk.

Unfortunately for him, the running play he called resulted in the first career fumble by fifth-year senior Deontae Cooper. With 1:23 left, Arizona pounced on the ball at the Washington 45-yard line and turned it seven plays later into a 47-yard field goal by Casey Skowron, flipping a signature win into a scarring loss that won’t be forgotten around Montlake until Lake Washington rises 50 feet from global melt.

Why take the risk of a fumble?

In a nutshell, that summarizes Petersen’s error, even though he gave a lengthy rationale for avoiding the risk of giving up possession with time left on the clock.

“What I didn’t want to do was take three knees and then have to punt,” he said. “We didn’t know exactly how many seconds would be left. I didn’t want to do that thing where you’re running around back there (attempting to kill the clock), then all of a sudden there’s one second left and they’re in field-goal range.

“So the strategy was, hey, we’re going to run one more play (with Cooper) and then we can re-look at the clock to see if we can get it all the way down to take a knee. Then the ball comes out.”

Hypothetically, given the way either the quarterback or, on fourth down, the punter could burn a few seconds before downing the ball, the risk of surrendering possession seems slight compared to what happened.

But as Petersen pointed out, had Arizona blocked the punt or returned it into field goal range for a successful kick, the same questions would rage “coming the other way.”

Petersen was adamant that the percentages calculated on “the chart,” the standard coach’s reference guide created before the season to estimate best outcomes considering down, distance and time, was accurate and inviolate.

“The one thing I really want you guys to know is, all of it was very calculated,” he said, seeking to dispel the notion of guesswork. “So you might not agree with the strategy, but we’ve got our charts (in) our game plans and (coaches) are looking at it upstairs.

“We’ve got four minutes and some seconds and we convert two first downs. Looking at the chart (at 1:33 remaining), we felt like we still had a handful of seconds left before we could really kneel and kill it.”

On another episode, Petersen was willing to admit that a chance was missed when the Huskies, with a timeout in hand, failed to use it to stop Arizona’s field goal drive at 30 seconds instead of :03, which would have allowed for a kickoff return by John Ross or a couple of scrimmage plays for a Hail Mary pass, currently the rage in the Pac-12.

“I didn’t think (Skowron) was going to make it,” Petersen said. “And my hat’s off to him. He did a nice job kicking in that game. They’ve had a little bit of struggles.”

What was wrong with calling a timeout with about 30 seconds left?

“I guess we could’ve done that, yeah,” Petersen said.

In the bigger picture, Petersen’s dubious clock management was the last and most vivid thing that obscured a preposterously long list of unforced errors — dropped balls, bad snaps, senseless penalties — that obscured the best Huskies’ game of the season.

In a sentence, the Huskies deserved to win the game as richly as they deserved to lose it.

That confounding outcome ruined a chance for a win on the road against a quality conference foe, which would have meant much to the program. Now, Petersen and his staff get to answer questions on the recruiting trail about whether telling time is a degree program at Washington.

If you need another head scratcher — and by now, the scalps of Huskies fans must look like the tee boxes at Jefferson Park after kiddies’ day — Petersen praised the “different” level of passion and effort that produced the many positive aspects of the game.

Why now, in the 11th game of the season, is it mustered?

“Bringing emotional energy and passion and those things, those sometimes are hard to replicate and practice. But I do think we’ve been making strides and it showed up this weekend.”

The Huskies have two games left — at 7:30 p.m. Saturday at home against Oregon State and 7:30 p.m. (that’s right; 7:30 p.m.) Nov. 29 at Washington State — to keep striding. But figuring out this team are mysteries that take time to solve, and time management is not something that appears in the Montlake skill set.