The whiff at Arizona stands out as the most memorable moment of the 2014 Huskies season, which can be ascribed to freshman mistakes — by the coaching staff. 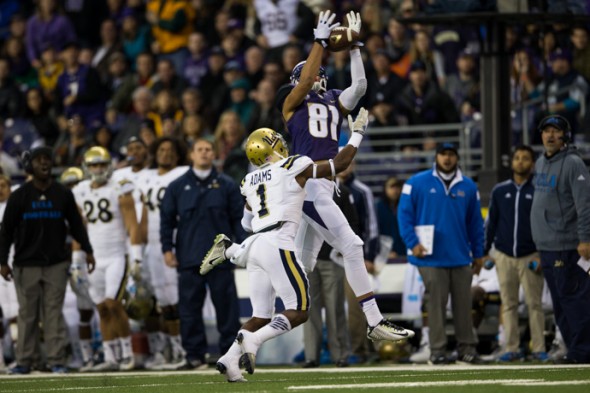 Brayden Lenius, a 6-5 WR from Vancouver, B.C., is among a few Huskies freshmen who have offered glimpses of promise. / Drew McKenzie, Sportspress Northwest

Huskies fans still retching over Washington’s one-point loss in Arizona Saturday are overlooking a silver lining: Coach Chris Petersen is not on the list of possible successors to the fired Will Muschamp at Florida.

There may be a second silver lining: Mismanaging the clock in the final 90 seconds overshadowed the facts that the Huskies, 11 games into the campaign, still have trouble snapping the ball and reading the rule book.

Maybe, in good lighting, that isn’t a silver lining. But at 6-5 and the object of some amount of ridicule, even a glint of hope is good.

For the season’s final home game of the season at 7:30 p.m. Saturday against Oregon State — speaking of time management, how about a golf clap for the networks’ scheduling of late starts for UW’s final two end-of-November games in Seattle and Pullman? — the Huskies will still be working on fundamentals: Hiking the ball and playing fair.

Plagued by occasional snap misfires in the shotgun, including one in Tucson that helped produce a fumble by QB Cyler Miles that Arizona recovered, Petersen this week switched Mike Crist from right guard to center, and season-long starter Colin Tanigawa from center to right guard.

“Colin has done a heck of a job in there blocking, but he can play guard,” Petersen said this week. “We’ve got other guys who can play center. That’s hard to deal with when the snaps aren’t right on the money.”

Changing linemen for so fundamental a function this late in the season is another sign of a clunky first year for Petersen. A number of upperclassmen inherited from coach Steve Sarkisian have not delivered to expectations.

Then there was the penalty count in Tucson — 13 for 111 yards against, a whopping blow compromising an otherwise robust offensive effort of 504 yards.

“There were some real aggressive penalties,” Petersen said. “It’s always playing right to the edge, then having great football intelligence and pulling back. We’ve got to get that cleaned up.

“But those things are hard to practice because the speed of the game changes, how fast you’re really going. We need to practice faster so we can have a chance to make some of those type of decisions.”

Again, a discovery this late in the season for the need to practice faster suggests the Huskies are behind in basic stuff. It adds some volume to the grumbling generated by Petersen’s dubious handling of the final 90 seconds of the 27-26 defeat at Arizona.

At the moment, the self-immolation in the desert stands as the most memorable episode of the 2014 season, although the firing of CB Marcus Peters or the suspension of QB Cyler Miles are sure to draw votes.

The dubious moments are prevailing because the Huskies did not startle with football progress. This season has gone to form: They have beaten the six teams they were favored to beat, and lost the five — all conference teams ranked in the top 25 at the time of the game — in which they were underdogs.

They are favored by 6½ points to beat the Beavers and probably will be favored in the Apple Cup. If the Huskies win out, they will finish 8-5 and likely will get a bowl bid, although that is not a lock, given that the Pac-12 may have up to 10 winning records for seven guaranteed bowl slots.

They could wind up in the unaffiliated Comet Bowl sponsored by the European Space Agency. But the travel time, an estimated 20-year round trip, may interfere with spring ball. Time never seems to be on the side of the Huskies.

Petersen’s first year has offered up three freshman starters, WR Dante Pettis and CBs Budda Baker and Sidney Jones, but little else that whets the appetite of the purple passionates for the future. In fact, it has been the freshman coaching staff that exuded vulnerability.

The Arizona game played out like the season has for Petersen and his newbies.

“We played a really good team,” Petersen said. “Sometimes it seemed like we did so many good things,  but there were so many things . . . everything else went against us and lined up for Arizona.”

To which he added:

The observation shouldn’t have been breaking news to a coach such as Petersen, who, at $3.2 million, receives the Pac-12’s top salary among public schools. His hope, as with his players, no one holds against him the freshman year.