His halftime stay on the sidelines Sunday illustrated the pounding Lynch has taken. How much is too much? Then again, how can the Seahawks succeed without their badass? 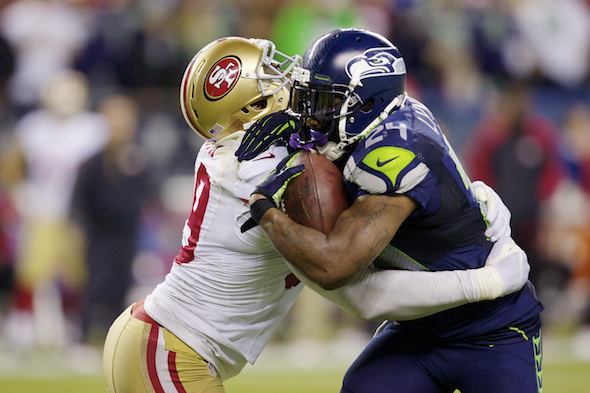 Marshawn Lynch: The action for which he is all about. / Drew McKenzie, Sportspress Northwest

RENTON — On his off-day, Marshawn Lynch dealt with three things he doesn’t like: School violence, unwanted publicity and someone telling him what to do. All this came on the heels of a national non-story Sunday that his decision to stay on the field at halftime in Kansas City to get treatment and save energy was a telltale on his allegedly fraught relationship with coach Pete Carroll.

It’s not a big surprise he has a sore back. He’s carrying a pro football team and, in his view, a boxcar of BS.

A disappointing 6-4 season has brought the delights and fears around Lynch into the hottest spotlight. Then comes this from offensive coordinator Darrell Bevell, when asked Wednesday to describe Lynch:

“I think he’s a very interesting guy. I don’t necessarily think that what you see is what you get. There’s a lot of layers to him, lot of hidden things. He’s a good person who does a lot of good things for people. You want him on your side.”

Then: What about the prospect of not having him on your side, which has been speculated as likely by next season?

“I don’t even want to think about it,” he said. “He’s so special to us. He does great things in every game, whether it’s the runs he makes, whether in the protections, how he takes care of the quarterback and see things other backs don’t; and his ability as a receiver —  he’s outstanding running routes and making catches.”

Skeptics may argue that Bevell is saying what is necessary to calm the waters around Lynch, for whom even the doing of a good deed is cause for sensation. But the point is that Bevell has been saying more or less the same thing for four years about Lynch, and the sentiment has been echoed around the locker room.

Lynch is the Seahawks’ best player, whose ferocity gave the Seahawks their bad-ass image in 2013.

Now more than ever, the Seahawks want and need Lynch. The only concern should be the pounding he’s taking. Not his contract, not his fine, not his eccentricity.

“He’s just been banged up,” coach Pete Carroll said Monday. “It’s classic wear and tear on a guy that plays the game the way he plays. We had to give him an extra day last week before we practiced him and we will see how it goes this week. I think it’s pretty typical and he’s been one to really be able to endure it over the past few years.”

How long can he last dishing out punishment as no other offensive player in the NFL?

Carroll is right, Lynch has always rallied. But how much is too much?

Of all the drama and comedy in the last few days that has swirled about him — Wednesday’s media session in front of his locker at VMAC might have sketch potential for  Saturday Night Live — his unusual halftime decision to stay where he was instead of going to the locker room was the only important matter.

In the second half, he ran 12 times for 58 yards and caught a short pass, so it seemed whatever treatment and stretching he had done pulled him through. Hell, it might be recommended for the rest of the Seahawks.

His physical well-being, and nothing else, exerts a gravitational pull on the franchise that I have seen locally only with the Mariners’ Ken Griffey Jr. and the Sonics’ Gary Payton. But with only 16 games in the NFL, any physical slippage by Lynch will have a more profound effect on the franchise. As Bevell said, he doesn’t want to think about it.

Of course, the Seahawks have to think it about it. And they did, drafting Christine Michael in the second round. The wisdom of the judgment has yet to be determined; no one watching closely is saying with certainty that Michael is the next man up, particularly when it comes to blocking and receiving.

The graveyard, Charles DeGaulle observed, is full of indispensable men. So the Seahawks will find a way to move on from Lynch. Someday. But having lost four games by margins of nine, six, two and four points, the Seahawks know that they are not that far away right now.

So, with so many others around Lynch dropping this season, his importance rises. Two weeks ago the club set a franchise record with 350 yards rushing and added 204 in Kansas City. Behind a bandaged offensive line, Lynch made it possible.

There is no danger Lynch will deliberately slow down, as did Sean Alexander after he earned his big contract in 2006. Lynch is playing for his future, be it in Seattle or elsewhere. He has a year left on his contract. If he wants an extension with serious guaranteed money, from Seattle or another club, he can show no weakness.

Lynch does himself and the team no favors by resisting the NFL’s collectively bargained mandate for media cooperation. He loses money and market, the team loses patience, and by mocking with non-answer answers, he annoys where he has more allies than he realizes.

Lynch wants more guaranteed money, plain and simple. When his teammates in Monday’s team meetings watch him destroy opponent defenses to help make their jobs easier, they want him to have more money too. As does Bevell, they want him on their side.

But the Seahawks, chastened by watching last week as Arizona QB Carson Palmer went down with a season-ending knee injury two days after signing a $50 million contract extension, look at the 28-year-old Lynch linger in repetitive pain on the sidelines at halftime and ask: How much is too much?

Tough call. In Percy Harvin, they already lost on one big investment. But can they also afford to lose their center of gravity too?

As long as he remains intact, the Seahawks need to reach for their wallet for Lynch. If they have trouble, he’s a proven help.