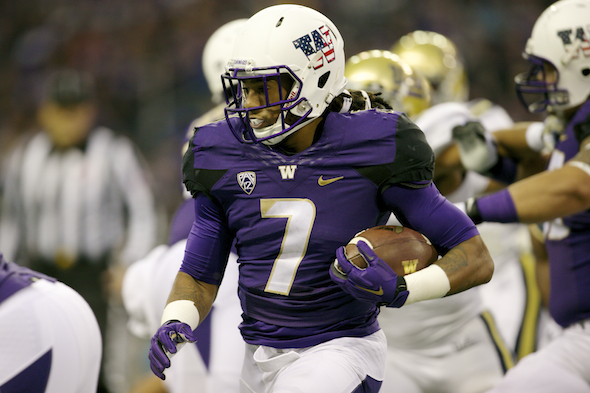 Linebacker/running back Shaq Thompson is a finalist for the Paul Hornung Award, presented to the nation’s most versatile player. / Drew Sellers, Sportspress Northwest

LB/RB Shaq Thompson and OLB Hau’oli Kikaha of the University of Washington have been selected finalists for three major postseason college football awards. Thompson is one of five in the running for the Paul Hornung Award, given annually to the nation’s most versatile player, and Kikaha is a finalist for the Lombardi Award, presented to the nation’s top lineman.

A senior, Kikaha is also a finalist for the Polynesian College Football Player of the Year Award.

Thompson scored four defensive touchdowns, three on fumble returns and one on an interception, and two offensive TDs. Thompson returned fumbles 100 yards against Califiornia, 52 against Illinois and 32 vs. Stanford. Thompson has rushed for 456 yards, including 174 at Colorado, and leads the Huskies in total tackles, fumble recoveries and tackles for loss.

Thompson’s competition for the Hornung Award, to be announced Jan. 27 by the Louisville Sports Commission: RB/return specialists Ameer Abdullah of Nebraska, B.L. Catalon of Texas Christian and Marcus Murphy of Missouri; and WR/return specialist Ty Montgomery of Stanford.

Kikaha, who has 16.5 sacks (tied for most in FBS), is a Lombardi finalist along with Clemson senior Vic Beasley, Ohio State sophomore Joey Bosa and Arizona sophomore Scooby Wright II. The winner will be announced by the Rotary Club of Houston Dec. 10.

Kikaha’s competition for the Polynesian College Football Player of the Year: Marcus Mariota of Oregon, Scott Harding of Hawaii, Nate Orchard of Utah and Anu Solomon of Arizona. The award will be announced Dec. 9.