The Arizona Cardinals have surpassed the Seahawks and San Francisco 49ers as the dominant team in the NFC West. Arizona and Seattle play Sunday at CenturyLink Field. 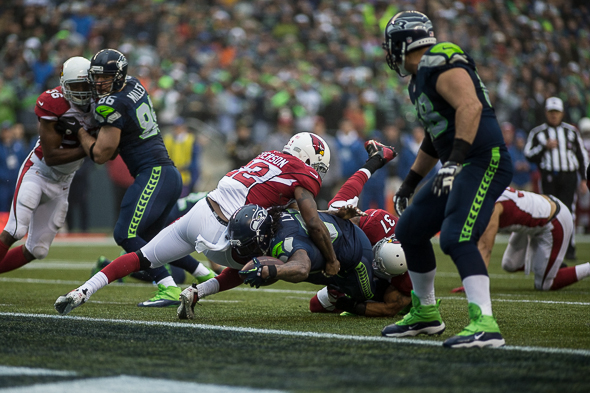 Arizona’s Patrick Peterson moves in for a tackle in the Cardinals’ 17-10 victory over the Seahawks in December at CenturyLink Field. / Drew McKenzie, Sportspress Northwest

The 12s have become so fixated on Jim Harbaugh and the San Francisco 49ers as their principal antagonists in the NFC West that the Arizona Cardinals have been able to sidle into the division’s elite team largely under the radar. Or, as Brian Billick observed on the NFL Network three weeks ago, “It’s hard to pay attention to a team that’s located way down there in the corner.” Time to pay attention.

The Cardinals arrive at CenturyLink Field Sunday (1:05 p.m., FOX) with the NFL’s best record (9-1), a league-best six-game winning streak and the confidence of knowing they have the manpower to KO the Seahawks and silence the 12s in their own house – not an easy feat.

But consider what the Cardinals did to Seattle at the Clink four games before the Seahawks obliterated Denver 43-8 in Super Bowl XLVIII.

They held the Seahawks to 10 points, their lowest total in the Super Bowl season and the lowest home output since scoring seven against the New York Giants Nov. 7, 2010.

Seattle’s offense accounted for a meager 192 net yards (341 in the Super Bowl) and a 22:36 time of possession (second lowest of the season). The Seahawks had only one drive that lasted more than six plays. In Seattle’s 13 drives, nine failed to produce a first down and eight were three plays or fewer. Four of the 13 resulted in negative yards.

The Cardinals had particular success against Marshawn Lynch and Russell Wilson. After gaining 60 yards in the first half, Lynch totaled 11 on seven attempts in the second. On 11 of his 18 rushes, Lynch gained two or fewer yards.

In handing Wilson his first home loss, the Cardinals held the Seattle quarterback to a 40.7 completion percentage (11 of 27), one touchdown, a pick and a 49.6 passer rating. At game’s end, the Cardinals asserted themselves as the best team in the NFC, but their 10 wins were not enough for a playoff berth.

The current Arizona team is better than the one that defeated Seattle. This Seahawks team is not as good as the one that lost that game.

The common perception is that Arizona used that Week 16 win at the Clink as a springboard to eminence this season. But the Cardinals were on their way to the top of the division well before it. Dating to Week 8 last year, these are the best records in the NFL since:

There is a lot to like about the Cardinals, who are reminiscent of last year’s Seahawks, even though they will have to go the rest of the year without QB Carson Palmer, shelved with an ACL tear.

The Cardinals are +11 in turnover ratio (second in NFL). After 10 games last year, the 9-1 Seahawks were +7 en route to leading the league at +20. The Cardinals have 12 fourth-quarter takeaways, an NFL high and more than eight teams have for the season. Through 10 games, the Cardinals have outscored opponents 91-34 in the fourth quarter.  The Seahawks have a 10-point, final-period edge, 77-67.

After eight sacks in Weeks 1-8, the Cardinals have 10 in the past two. Seven players recorded those sacks. By contrast, the Seahawks have 13 in 10 games and are well aware that the past Sunday the Cardinals not only sacked Detroit’s Matt Stafford four times, but registered seven tackles for loss and four quarterback hits.

The Cardinals, who don’t allow many sacks (16), also rank third in the NFL in fewest rushing yards allowed, 80.5 per game (Seahawks rank seventh at 90.8).

“They get after it,” Pete Carroll said this week. “They’ve also been committed to throw the ball down the field. They’ve got very good receivers and a really fast guy in John Brown. And you can’t get any better than Larry Fitzgerald.”

The Cardinals did something unusual against the Lions: Drew Stanton, who replaced Palmer, completed passes to 10 receivers. That marked the second time this season that the Cardinals had at least 10 receivers catch passes (11 in Week 1 vs. San Diego). The Seahawks had one such game, when Wilson completed throws to 11 receivers against Denver in Week 3.

The Cardinals are resourceful. They have erased four fourth-quarter deficits to win this season and held six consecutive opponents (and nine of 10 overall) to fewer than 20 points. They defeated San Diego where Seattle could not. They won in Dallas, which defeated the Seahawks at CenturyLink Field, and they beat St. Louis, which Seattle couldn’t do.

While the Seahawks have suffered through injuries (Brandon Mebane, Bobby Wagner, Max Unger, Byron Maxwell, Zach Miller among others), the Cardinals have also weathered the absences of numerous players.

“They fly around the football and they’re doing a great job,” Wilson said this week. “They’re getting turnovers and making plays. We’re going to have to play big-time football, so we have to make sure we protect the ball and capitalize in the red zone.”

In four career starts against Arizona, Wilson has a 79.1 passer rating (his number against all teams is 98.0) and averages 6.22 yards per attempt, his worst stats against any opponent he has faced at least three times.