Two former Mariners, an ex-manager, Don Wakamatsu, and ex-player, Raul Ibanez, have emerged as finalists to become the manager of the Tampa Bay Rays. 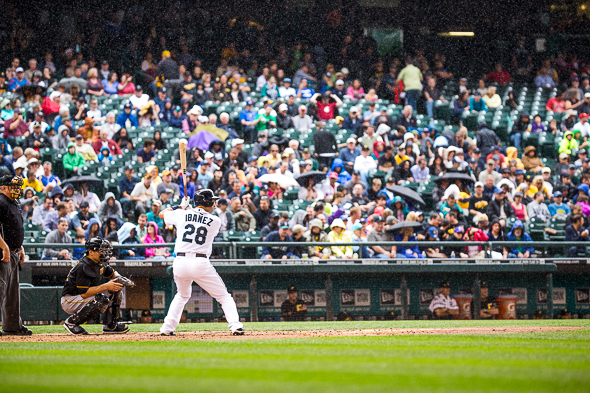 Raul Ibanez, a three-time Mariner, is one of three candidates to manage the Tampa Bay Rays. / Drew McKenzie, Sportspress Northwest

Two former Mariners, an ex-manager and ex-player, are among three finalists to become manager of the Tampa Bay Rays, replacing Joe Maddon, who quit earlier this month to assume the same job with the Chicago Cubs. Don Wakamatsu directed the Mariners in 2009-10 and Raul Ibanez had three stints in Seattle, 1996-2000, 2004-08 and 2013. The third candidate to manage the Rays is Kevin Cash.

The Rays Friday lopped seven managerial candidates, including Dave Martinez, the Rays’ bench coach for the past seven seasons. Also cut were Barry Larkin, Doug Glanville, Manny Acta, Craig Counsell, Charlie Montoyo and Ron Wotus. Tampa Bay said that interviews with the finalists are scheduled for the week of Dec. 1.

Wakamatsu played in the minor leagues from 1985 to 1996, reaching the major leagues for 18 games with the Chicago White Sox in 1991.

Should Wakamatsu be hired, he would become the first former Mariner manager to lead another big league club since Bob Melvin, who managed the Mariners in 2003-04 and later became skipper of the Arizona Diamondbacks (2005-09). Melvin has been the manager of the Oakland Athletics since 2011.

Ibanez, 42, spent 19 seasons in the major leagues with Seattle, Kansas City, Philadelphia, the Yankees and the Los Angeles Angels and has 305 homers and 2,034 hits. He helped the Royals win this year’s AL pennant. For the 2013 Mariners, Ibanez hit 29 home runs, tying legendary Ted Williams for the most homers in a season by a player 40 or older.

Should the Rays hire Ibanez, he would become the fifth former Mariners player to manage a big league team.

The 36-year-old Cash played for Tampa Northside in the 1989 Little League World Series and was a big league catcher for eight seasons with Toronto, Tampa Bay, Boston, the New York Yankees and Houston from 2002-10. He was a major league advance scout for Toronto in 2012 and Cleveland’s bullpen coach in 2013-14.