After a nervous first half, Washington gathered its wits and sent a revived Shawn Kemp Jr. to the rim for a 63-48 trimph that maintained the Huskies’ civic hegemony. 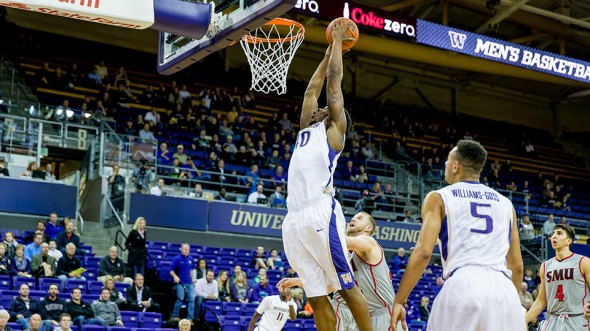 Shawn Kemp, here against St. Martin’s in the exhibition opener, had 12 points and seven rebounds against Seattle U Friday night. / UW Athletics

As the Washington Huskies and Seattle University Redhawks sent college basketball shrieking back to the the 1950s Friday, the vacuum seemed to free up a ghost at KeyArena: Shawn Kemp. Eighteen years after his pinnacle season electrified the old barn, his son, Shawn Jr., threw down like his dad.

In his senior season, the son, toned and healthy for perhaps the first time in his basketball life, drew the sharpest comparison yet to his NBA All-Star father.

Not a full replica, of course, but enough that those in the crowd of 5,319 who went back to the Days of Sonics Reign snickered and whooped when he dropped three massive jams on the overmatched Redhawks.

Said Huskies coach Lorenzo Romar: “He was an absolute warrior out there tonight.”

The annual game between between the city’s Division I schools was otherwise sub-pedestrian. Hard defense and bad shooting producing a 21-20 Redhawks lead at halftime, but the Huskies calmed down and start running SU out of its zone. The 63-48 Washington victory was actually a little closer than the final score, but not so much that the Huskies’ winning streak in this series, now 10 in a row and 26-4 overall, was in real jeopardy.

After 17 points and six rebounds in the Huskies’ opener against South Carolina State, Kemp had 12 and seven against SU. Over the summer and fall there was quiet talk that Kemp, set back the past season by Graves disease diagnosis, had dedicated himself to improving fitness and strength. It showed.

“He’s a completely different player,” said teammate Andrew Andrews, who had 11 points. “Just the way he practices and approaches the game. He’s been through the program, knows the ins and outs. He knows we gotta win and he’s stepped up big time for us.”

Kemp seems on the verge of fulfilling his college potential, which could be a season-saver for Romar, who didn’t seem to have enough returning talent to even match the 17-15 record from 2013 that was enough to keep Washington out of the postseason.

But with the return of 6-10 forward Jernard Jarreau, who missed all of last season with injury, and the arrival of Fresno State transfer Robert Upshaw, a 6-11 shot-swatting pivot, the Huskies have a gnarly front line of tall, agile athletes that is going to cause good teams problems.

Kemp was the mystery man. Romar saw it coming.

“In his summer workouts, there was something about him, a gleam in his eye,” Romar said. “He said, ‘I’m ready to go, to do what I need to do.’ It carried over into the fall. It’s no secret: You put the time in the right way, it will pay dividends if you have the basic talent.

“He is strong, and he’s playing with as much confidence as he’s ever had. To have him have this kind of start to his senior year, it’s really good to see.”

Kemp and the front line was part of the reason the Redhawks shot 28.6 percent from the field, although the 3-for-21 shooting beyond arc was mostly SU-manufactured  rim-bending. Leading scorer Isiah Umipig of Federal Way missed eight of 10 threes and was four of 19 overall. With him knocked into a bad night by the Huskies’ taller guards, Seattle had little chance.

From the bench, where he watched Kemp as an opponent four four seasons, Redhawks coach Cameron Dollar has seen a serious uptick.

“He’s grown into a man,” he said. “He’s calm, but he is consistently coming. You don’t realize how many times he’s hit you. By the second half, he wears you down and he’s getting the offensive rebounds. You’re not going to pitch a shutout in terms of boxing him out. It’s a testament to his consistency.”

While Seattle U. has upgraded its talent, it remains, in the sixth season in Division I under Dollar, an inarguable underdog and little threat to Washington’s civic-hoops hegemony. The Huskies, meanwhile, have a surprising amount of talent that still is in training-wheels mode. They didn’t get to 13 points until 16 minutes were gone in the first half.

“We had the jitters in the first half tonight,” Romar said. “You can really see it. They see the ball coming and they bobble it; overanxious. In was uncharacteristic of us. We were taking off before we had the ball. In the second half, we relaxed.”

The series is s long way from a rivalry, and the Huskies are a ways from the time several years ago when college ball generated a civic pulse. But if Reign Man the Deuce is stays healthy and strong, Montlake may get on up for the downstroke.