Washington QB Cyler Miles had his most complete game in a 37-13 win over Oregon State that made the Huskies bowl-eligible. 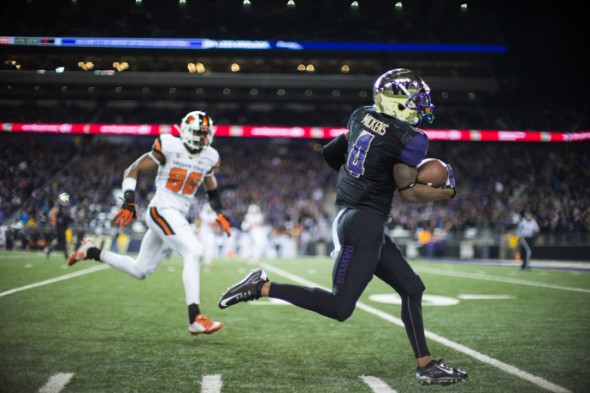 Washington’s Jaydon Mickens tightroped down the sidelines on a jet sweep that became a 36-yard touchdown in the fourth quarter Saturday night. / Drew McKenzie, Sportspress Northwest

Imagine what Cyler Miles might have done this season had he had spring practice with the Washington Huskies. As the season nears its end, the inconsistent junior quarterback seems to have pulled his game together, as evidenced by his play Saturday night at Husky Stadium in a 37-13 triumph over Oregon State (5-6) that made the 7-5 Huskies bowl-eligible.

Among his 18 completions in 23 attempts for 253 yards was a touchdown pass on Washington’s first possession that provided a lead never lost. The perfectly thrown 54-yard touchdown to WR Jaydon Mickens was among his best of the year and another sign that Miles needed time before mastering the more subtle QB arts.

“He threw some really nice balls,” coach Chris Petersen said on KOMO radio. “He did a nice job moving the ball around, he wasn’t locked in to one receiver. He was dialed into Oregon State coverage and got the ball where it needed to go.”

Miles was suspended for spring ball and the first game of the season for his foolish involvement in campus altercations after the Super Bowl. The lost practice reps loom larger as Miles demonstrates he’s a better quarterback than was seen earlier in the season.

Of course, it helped that the Huskies avoided his weakness, red-zone decisions, by bombing home four scores from afar. Besides the shot to Mickens, RB Dwayne Washington had a 68-yard run for UW’s second TD, and a pair of fourth-quarter scores: Mickens again on a 36-yard fly sweep and 68 yards on a throwback screen to backup TE Darrell Daniels.

Miles had only four rushes for seven yards, but that wasn’t bad because he chose more often to stay in the pocket. He still had a fumble, but he recovered it in the pocket. Another sign of improvement came in the second quarter when he broke away under pressure, but instead of running himself, he kept his eyes downfield for a short, soft pass to Dante Pettis that produced 25 yards — a Russell Wilson-style escape.

The game built upon a good showing the previous week when he had 21 completions in 30 attempts for 249 yards in Tucson. But that wasn’t good enough because the Huskies lost to Arizona 27-26, thanks to numerous self-inflicted wounds from the coaching staff on down.

The apprehension this week was that that loss was so aggravating, it would end up beating Washington twice. But the 14-0 lead after two possessions allayed those fears.

“It was nice to get out of the gate fast,” Petersen said. “He threw a nice ball, and Jaydon separated late to get it. We needed to start fast.

“That was a hard one last week.  But they showed up Monday ready to go to work. By Tuesday, you couldn’t tell whether we won or lost. I think they know they did good things (at Arizona). We did everything but get a W. And there was a lot of motivation for seniors to go out victorious.”

The Huskies, who beat the Beavers 69-27 in Corvallis a year ago — in relief of injured Keith Price, Miles had his first career start — applied the same formula again: Shake up QB Shawn Mannion. On the game’s first scrimmage play, Hau’oli Kikaha, UW’s career sack leader, pulled down Mannion for an eight-yard loss. It was the first of four sacks, as well as a devastating interception and 59-yard return by LB Travis Feeney.

Mannion, the Pac-12’s career passing leader, had a solid game with 30 completions in 46 attempts for 314 yards, including a 72-yard bomb to WR Victor Bolden on third down and 25 from the OSU 5-yard line. But the Beavers were frequently thwarted on third downs (9 for 18) and especially on two fourth-down plays when coach Mike Riley passed up the chance for field goals.

The regular season closes with the Apple Cup at 7:30 p.m. Saturday in Pullman. Washington State lost 52-31 Saturday to Arizona State in Tempe.

The Huskies’ bowl bid and opponent will be determined after the games of Dec. 7.