The Seahawks have won only three games in franchise history in which their quarterback was sacked seven or more times. Russell Wilson has quarterbacked two of them. 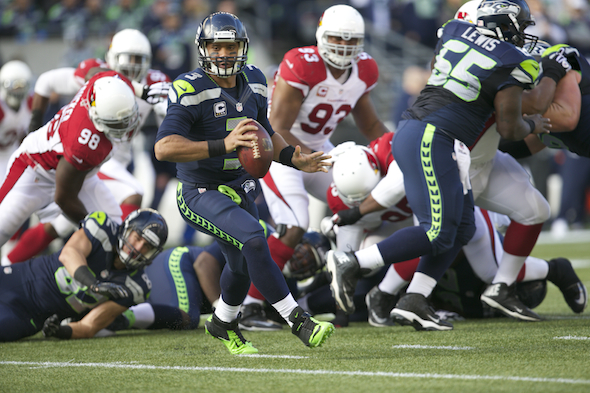 After a string of sub-par passing performances dating to Week 8, Russell Wilson went 17-for-22 for 211 yards (121.6 rating), and added 73 yards rushing in the Seahawks’ 19-3 victory over the Arizona Cardinals Sunday. Wilson played his best on Seattle’s lone touchdown drive when he completed all six of his passes and made two remarkable plays.

On first-and-10 from the Seattle 48, Wilson escaped the clutches of Lorenzo Alexander and found Marshawn Lynch in the clear for 23 yards. Then, on third-and-11 from the Arizona 30, Wilson scrambled for 15 yards to get the Seahawks to the 15. After a false start penalty, Wilson’s 20-yard touchdown to backup TE Cooper Helfet iced the game.

In addition to his two big plays on Seattle’s only successful soiree (five attempts) into the red zone, Wilson went 11-for-13 for 153 yards when the Cardinals unleashed the blitz, including 5-for-6 for 70 yards while under duress. Wilson also turned his five zone-read rushes into 46 yards.

“I think we let Russell Wilson be Russell Wilson on too many occasions,” said Arizona safety Tyrann Mathieu, referring to one of the few players in the NFL who can win a game almost by himself (remember the Week 3 overtime drive vs. Denver?).

Seattle’s offensive line let Russell Wilson get flattened on too many occasions. The Cardinals took down the NFL’s best escape artist seven times for a loss of 42 yards, making Seatte’s victory almost unique in franchise history.

Dave Krieg was the victim 24 years ago at Kansas City, where the Chiefs splattered him a franchise-record nine times, including an NFL-record eight by the late Derrick Thomas. Instead of becoming one of the most infamous games in team history, Krieg saved the day with a 25-yard TD pass to Paul Skansi in the last seconds to pull out a 17-16 win. Thomas nearly collected his ninth sack on the play.

Wilson quarterbacked the other two seven-sack wins, his first at St. Louis when, despite the rash of takedowns, the Seahawks knocked off the Rams 14-9.

Wilson’s two wins while taking seven sacks also make him the only NFL quarterback in the last decade to direct a pair of such victories:

After Sunday’s victory, Wilson also holds another distinction. Since Sept. 24, 1978, when Jim Zorn first accomplished the feat in a win over Detroit, only six Seahawks quarterbacks have won a game while enduring six or more sacks.

Krieg quarterbacked three such games. In addition to winning at Kansas City despite nine sacks, he beat the Chiefs Nov. 27, 1983 with six sacks and the Raiders Nov. 12, 1984 while also taking six.

Now Wilson has three such games. In addition to the two previously mentioned, Wilson sustained six sacks in a 20-13 win over St. Louis Dec. 30, 2012.

It’s a poor statistic to evaluate the overall ability of a quarterback, or his contribution to a team’s success. This is especially true of Wilson, whose designed and impromptu runs have been key to numerous Seahawks victories the last three seasons.

But the rating number accurately reflects a quarterback’s effectiveness as a passer. In Wilson’s case, he has produced a passer rating above 100 22 times in his career, including Sunday’s 121.6. Seattle’s record in those games: 19-3.

Golden Tate has 1,047 yards for the Detroit Lions.