Seahawks have 5-game losing streak in the Bay

Even without spotlight of a Thanksgiving primetime start, Seahawks-49ers would still be an attention magnet because of CB Sherman’s NFC Championship game antics. 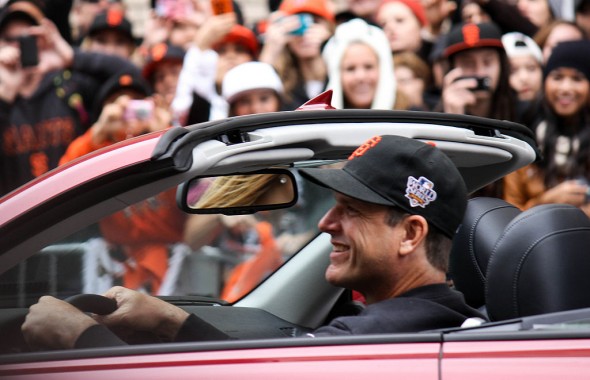 San Francisco’s Jim Harbaugh, in a championship parade for the Giants (the 49ers haven’t had one under his leadership), has thwarted injuries and reports of dysfunction to emerge as an NFC contender. Again. / Ezra Shaw, Getty Images

That afternoon at Candlestick Park, Seattle FB Leonard Weaver caught two touchdown passes from QB Seneca Wallace and San Francisco TE Vernon Davis was benched by then-interim coach Mike Singletary. Making his debut, Singletary infamously pulled down his pants during a halftime speech, then went on a post-game rant that became the stuff of YouTube legend.

Other than the sideshow, the Seahawks’ 34-13 rout was trivial. San Francisco finished 7-9, while Seattle went 4-12 in coach Mike Holmgren’s final Seattle season.

So yes, a lot has changed in six years, except the result when the Seahawks play San Francisco away from CenturyLink Field — Seattle has a five-game road losing streak against the 49ers.

He can put an end to the trend Thursday night in Seattle’s first game at Levi’s Stadium (5:30 p.m, NBC), as the Seahawks continue a stretch of five of six games against the NFC West to close the season.

Asked Monday to characterize the Seahawks-49ers rivalry, Carroll compared it to playing the 9-2 Cardinals, who Seattle beat 19-3 Sunday, because both teams feature uncommon physicality on defense and a power running game.

“It’s an enormous matchup — the style of play was so evident (Sunday) of teams slugging it out,” Carroll said. “It’s going to be the same thing.”

With Arizona (9-2) holding a two-game lead over San Francisco and Seattle (both 7-4) in the NFC West, the Thanksgiving night matchup has major playoff implications. The Seahawks are sixth in the conference standings (the final NFC playoff spot), the 49ers eighth, because of tiebreakers. The home team is a one-point favorite.

Anyone with a shred of NFL knowledge knows that even without stakes to play for, or the spotlight of a Thanksgiving primetime start, the game would still be hyped largely because Seahawks CB Richard Sherman clinched the 2013 NFC West Championship game by tipping Colin Kaepernick’s under-thrown pass intended for WR Michael Crabtree to teammate Malcolm Smith.

“I don’t think it plays a factor,” Harbaugh said Tuesday.

It was the pinnacle moment of the Seahawks run to the Super Bowl win. It also spurred a media firestorm after Sherman taunted Crabtree before launching into a post-game, WWE-style tirade in an interview with FOX sideline reporter Erin Andrews, that well, became the stuff of YouTube legend.

There’s also the Carroll-Harbaugh rivalry that goes back to when Carroll was at USC and Harbaugh at Stanford. Remember this? Or this?

Since moving on to the NFL, both have drafted a talented young quarterback (Wilson and Kaepernick), developed an elite defense and used unique coaching styles to incredible success, with Harbaugh making it to the NFC Championship the past three years. Last season, Carroll guided the Seahawks to a 13-3 regular season and a win in Super Bowl XLVIII.

So who’s ready for some football?

“I hate Thursday games, just in general,” said Seahawks DE Cliff Avril, who went 0-5 on Turkey Day during his five seasons with the Detroit Lions. “When you’re young, it doesn’t affect you as much because you bounce back quicker. But once you get older, you realize your body doesn’t start feeling good until Thursday. You’ve got to rush the process a little bit.”

True, but those expecting another poorly played NFL Thursday night game should reassess. The 2014 Seahawks and 49ers have overcome injuries to key contributors amid a sideshow of rumors to keep themselves in the NFC playoff race. Consider: Winners of three in a row, the 49ers are without LBs NaVorro Bowman and Patrick Willis, CB Chris Cook, C Daniel Kilgore, CB Jimmie Ward, RB Kendall Hunter and DT Ian Williams. DE Aldon Smith has played two games after a nine-game suspension.

Oh, and Harbaugh reportedly won’t return next season, even if San Francisco wins the Super Bowl, according to a report from FOX sports insider Jay Glazer.

“I think he’ll back,” Kaepernick said.

The Seahawks? They’re playing without DT Brandon Mebane, lost for the year to a hamstring injury, and Pro-Bowl C Max Unger. Only last week did they welcome back MLB Bobby Wagner after he missed the previous five games with a foot injury. Cornerbacks Jeremy Lane, Byron Maxwell and Tharold Simon have missed time but are now healthy. But TE Zach Miller and FB Derrick Coleman are both on injured reserve.

Yet the Seahawks have won four of their last six after trading star WR Percy Harvin, while ignoring reports of a split locker room and RB Marshawn Lynch’s uncertain future in Seattle.

Is it Thursday yet?