Huskies coach Chris Petersen is new to the Apple Cup, so perhaps he’ll get a snowy, freezing night in Pullman to really understand the high standards of the rivalry. 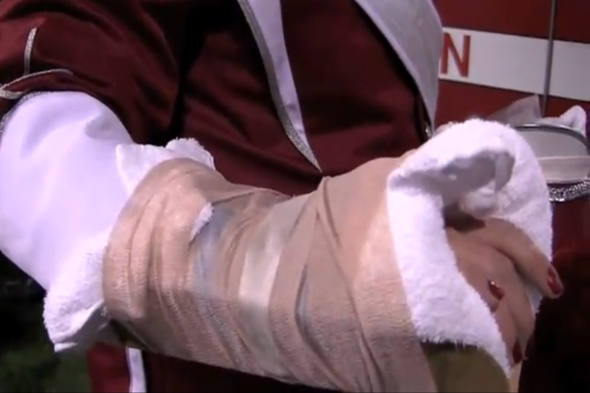 A member of the Washington State band needed a splint after being struck by an ice ball thrown from high up Martin Stadium during the 2010 Apple Cup in Pullman. / Sportspress Northwest file

In his first Apple Cup week, Chris Petersen flirted with honesty. No, the newcomer Huskies coach didn’t that say it was a shame the cows don’t have a Washington State team of which they can be proud. But he did say the traditional game was a far bigger deal for fans than players, which has always been true but usually talked around by coaches disinclined to dismiss fan foolishness.

“The fans are the ones that are so intense about this,” Petersen said Monday. “We’re intense about the game anyway. So to say,  ‘OK, now we’ve got to really play extra hard.’ I mean, really?”

Really. Some fans like to imagine that players care as much they do. Rivalry games are like that, able to warp sensibilities. Generations of fans get on their tribal allegiances once a year in order to justify disparaging the wrong-colored varmints from the wrong institutes of higher education. It’s inane, but if logic were applied to college football, the sport would have been banned years ago.

So there’s a considerable buy-in to the entire mythology. To which Petersen subscribes — he has no choice.

Asked whether he had been debriefed about the mayhem that frequently attends Apple Cups in Martin Stadium, site of this year’s disputation at 7:30 p.m. Saturday (Fox Sports 1), he deferred.

“We haven’t talked a whole lot about that,” he said. “The only thing we can do is control what we can control. Hopefully there aren’t too many snowballs they can throw.”

Sounds as if he has heard a few things. Like maybe the Apple Cup in 2010. If he would like to know more, fifth-year senior WR DiAndre Campbell can fill him in. A freshman using his redshirt year, he was on the sidelines for QB Jake Locker’s final UW regular-season game, which Washington won 35-28 to become bowl-eligible.

“If you’re not from Washington, you don’t understand the rivalry and how intense it really is,” said Campbell, a 6-2, 205-pounder from Oakland Tech. “Being in a hostile crowd, talking smack, that whole vibe. It was pretty cool.”

Then it turned cruel. The culprits were drunken students, their weapon of choice was ice.

Before the game, the stadium had to be cleared of snow. Left behind was slush that refroze into ice balls. Before halftime, some in the announced crowd of 30,157  launched the frozen missiles from sections containing WSU as well as UW students, striking other fans lower in the stands, as well as band members from both schools assembling for the halftime show.

In the fourth quarter, Semisi Tokolahi, a UW defensive tackle, broke an ankle. As he was taken off the field on a cart, he was pelted by ice balls.

“I’ll never forget that,” Campbell said. “That will forever stick in my mind. He got hit. That was the utmost disrespect for a player who had a season-ending injury.”

News reports following the game said 34 people were treated at a stadium first-aid station by paramedics and eight were taken to the hospital. Campus police reported 18 arrests and 30 ejections, although some were for fighting.

“In that moment, I really understood the significance and hatred between the schools,” Campbell said.  “A defining moment. They don’t get along.”

WSU police chief Bill Gardner released a statement on behalf of his police department following the game condemning the violence, saying he “was disappointed in the fans’ behavior on both sides” and calling their actions both “inappropriate and dangerous.”

Fortunately for attendees Saturday, the forecast is for chilly weather, but any precip likely is modest and will start as rain in the morning and perhaps snow by evening. But no glacial activity.

Then again, the weather was decent in 2012, when the Cougars upset the Huskies 31-28 in overtime. UW’s Travis Coons missed a game-winning field goal in regulation, QB Keith Price lost a fumble in OT that was returned nearly the length of the field, then WSU kicked the game-winning field goal. Hundreds of fans poured onto the field to celebrate, including one Cougars fan who discovered Huskies TE Austin Seferian-Jenkins walking off the field without his helmet and sucker-punched him in the face.

We could go on, but suffice to say that there’s nothing like college football tradition.

“You always hear ‘throw out all the records,’ all that stuff, but I think there’s some truth to that,” said Petersen. “I just think things even out and crazy things happen.”

Hoo-boy. He has no idea.