When does it get good for Huskies, Cougars?

Again, the Apple Cup is ceremonial, as opposed to relevant. As college football continues to pull apart as it goes pro, it’s only going to get tougher for WSU. 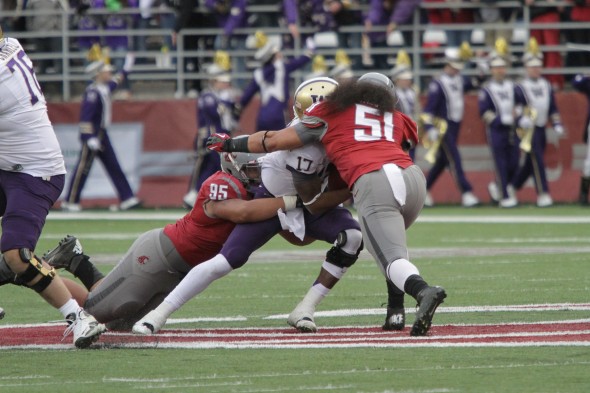 Scrolling through the ancient texts before the Apple Cup Saturday, I see that the Cougars are approaching the 100th anniversary of their first, last and thus only Rose Bowl win: 14-0 over Brown in 1916, when the Granddaddy Bowl was a two-year-old toddler.

That is not meant as a pre-game put-down of the Cougars. In fact, Wazzu has been to the Rose Bowl more recently than the Huskies: a 2003 appearance against Oklahoma, whereas the Huskies were there most recently in 2001 against Purdue. And over the past 10 Apple Cups, the teams are 5-5.

I bring up the Rose Bowl ahead of the Apple Cup now, because the Rose Bowl is not in discussion this weekend, and hasn’t been for a decade. After Mike Price left Pullman for an abortive tenure at Alabama, and after the NCAA landed in Montlake upon yet another scandal, the Apple Cup has been mostly an empty ritual, its annual-ness being the primary virtue, with minimal to no stakes.

As 7-5 Washington team meets 3-8 Washington State, it is fair to ask: When does it again get Rose Bowl good for both programs?

An answer is worthy because the Pac-12 Conference itself continues to ghetto-ize the Apple Cup scheduling. A kickoff of  7:30 p.m. Saturday night on a holiday weekend in frozen Pullman when many, if not most, students are not on campus, pleases only 24 people in the world — 12 university presidents and 12 athletics directors who are in charge of budgets.

If it were possible to choke down a gallon of truth serum in WSU AD Bill Moos and his UW counterpart, Scott Woodward, and their presidential bosses, the number would drop to 20.

Yes, I know the arguments about kowtowing to the networks’ eagerness to throw money at college football: The huge windfall of revenues allows football to not only sustain itself financially, but float all the non-revenue sports with enough left over to upgrade facilities at Husky Stadium and Martin Stadium, as well as pay coaching staffs millions. The virtues are many.

But sacrifices come with it. Such as playing the big game at the crappiest time because UW-WSU isn’t relevant.

The problem will grow as college football advances, inevitably and necessarily, to complete professionalization, once the NCAA loses all the litigation stacked against it.

The big money is already upon the Power Five conferences, marginalizing the other 60 schools in what used to be known as Division I-A. And within the Power Five, professional money will gravitate to the best programs, creating a sort of competitive class division.

Washington probably has the resources to make the upper class, but WSU is in trouble for all the obvious reasons. Coach Mike Leach isn’t responsible for the legacy issues, but he was hired to get the Cougars competitive. His Air Raid offense can work when he can hire enough players for both sides of the ball, but so far, it just looks silly.

With remade Husky Stadium a fresh asset, Chris Petersen should be on a par with the top echelon of the Pac-12. But if resources are relatively equal, it’s going to come down to coaching and recruiting. Petersen certainly has the resume, but his first season has been rocky.

That can be written off to the tumult that almost always accompanies transition. But if Petersen says one more time that winning in the Pac-12 is “real hard,” his credibility will take flight over Lake Washington.

If he does eventually in his career beat Oregon, the Huskies will be among the elites. Which is why Leach really needs to win Saturday. As college football continues to pull apart, it’s better to hang on to the front end than be in the back end.