The Seahawks parlayed a stifling defense, an error-free game by Russell Wilson and 104 rushing yards by Marshawn Lynch into a 19-3 win over San Francisco Thursday night. 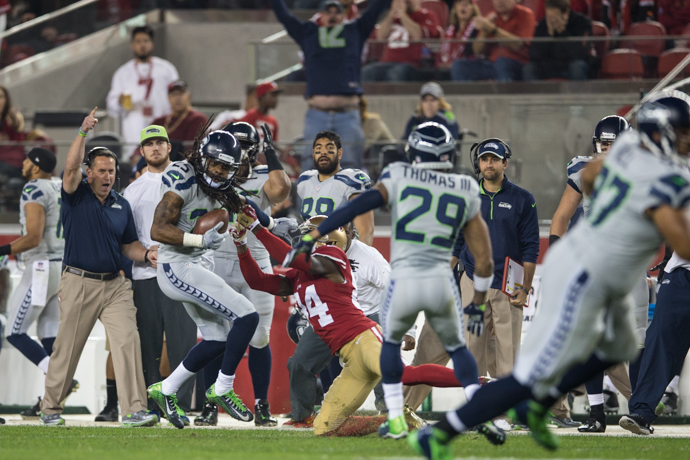 If San Franciscans voted on it now, Richard Sherman might be elected the most hated opponent — in any sport — in Bay Area history. As an encore to his entertaining (for Seattle fans) rant against Michael Crabtree following January’s NFC Championship, Sherman rubbed a veritable salt lick in the 49ers’ wounds Thursday night with two huge interceptions in Seattle’s 19-3 victory at Levi Stadium in Santa Clara, CA.

He celebrated with typical Sherman bravado, blowing kisses to the crowd as the clock wound down and then gorging on an NBC-provided turkey leg on the 49ers’ logo at midfield during a post-game TV interview. But before that, Sherman was All Pro business.

Sherman’s first pick, in the opening quarter, helped set up Seattle’s first touchdown. His second, in the fourth, erased any slim chance San Francisco might have had at a comeback. He nearly added a third.

In between Sherman’s thefts, Marshawn Lynch ran for 104 yards, Russell Wilson provided his usual bucket list of Houdini-style escapes, and the Seattle defense crushed the San Francisco offense every bit as thoroughly as it did Arizona’s four days ago — in fact, prevailing by the same score.

“It’s a huge game for us to win on their their turf,” said Wilson, winning for the first time against the 49ers on the road. “It’s a tough thing to do.”

The Seahawks made it look relatively easy in improving to 8-4 after starting the season a lackluster 3-3. Their victory, achieved despite 14 penalties for 105 yards (to San Francisco’s three for 20), just about squashes the 49ers’ (7-5) chances of reaching the postseason, given the toughness of the NFC West.

The Seahawks actually could have made it a blowout if not for all the flags, as well as failing to score touchdowns in the red zone, rather than settling for four Steven Hauschka field goals. But they had more than enough to handle the 49ers, who came out surprisingly cold offensively and stayed that way.

The Seahawks piled up 379 yards of total offense and held San Francisco to 164, including only 100 passing by Colin Kaepernick, who was sacked four times, hit five times, and finished with an abysmal 36.7 passer rating. Kaepernick, off target all night, completed 16 of 29 and practically telegraphed both interceptions to Sherman.

Wilson couldn’t have been much better. He completed 15 for 22 and a touchdown, had another TD pass called back, set up Hauschka’s first field goal with a 63-yard completion to backup TE Tony Moeaki, and abetted Hauschka’s fourth with a 12-yard scramble early in the fourth quarter. Mistake-free for the second consecutive game, Wilson finished with a 118.2 passer rating, his sixth above 100 this season.

The 49ers entered allowing 92.9 rushing yards, seventh in the NFL, but the Seahawks blasted them for 157, including 35 by Wilson, whose best play occurred on a non-scripted scramble in the second quarter.

Wilson retreated to pass, couldn’t find a receiver, started to run, froze the 49ers with a pair of fakes, remarkably eluded three tacklers and then found Moeaki for a floater on the right sideline for what should have been a 20-yard gain. But Moeaki high-stepped down the stripe for 63 yards to the one-yard line.

“It’s pretty special to see Moeaki come to our team only a few weeks ago and play at such a high level,” said Wilson.

The Seahawks couldn’t punch in a touchdown, but took a 10-0 lead on a 21-yard Hauschka field goal just two series after Wilson tossed a 13-yard TD to Robert Turbin, that score following Sherman’s first interception at the San Francisco 45.

By then, the Seahawks established clear dominance, holding the 49ers to 2.6 yards per play and only 23 rushing yards. Kaepernick had a 28.6 passer rating and couldn’t improve on it much in the second half. Kaepernick couldn’t even run, gaining only 17 yards.

The Seahawks increased the lead to 16-0 at 8:05 of the third, following a 33-yard run by Lynch, when Hauschka was successful from 35 yards after an apparent Wilson-to-Paul Richardson TD pass was nixed due to an interference call on Turbin.

Aided by 25 yards in Seattle penalties, the 49ers went 59 yards in 12 plays, capping the drive with Phil Dawson’s 40-yard field goal, to trim the margin to 16-3. Michael Bennett sacked Kaepernick on a third and eight to force the field goal.

But the Seahawks nullified Dawson’s three after a Wilson third-down scramble that set up Hauschka’s final field goal from 46 yards. With one chance remaining, Kaepernick threw his second pick to Sherman, who spent most of the rest of the game on the sideline almost comically taunting the crowd.

Notes: The Seahawks snapped a five-game road losing streak to San Francisco . . . The Seahawks have won 28 of their last 36 regular-season games, improved to 2-2 on Thanksgiving, to 3-0 on prime time this season, and to 12-1 in prime time all-time under Carroll . . . Sherman’s interceptions marked the 22nd and 23rd of his career, most in the NFL since 2011 . . .Wilson has 32 wins as a starting quarterback . . . Wilson completed passes to eight receivers, including four to TE Luke Willson for 39 yards . . . In his second game back following a five-game injury absence, LB Bobby Wagner recorded 10 tackles, nine solo . . . Crabtree was no factor, catching only three passes for 10 yards.

The Seahawks travel to Philadelphia Dec. 7 for a 1:25 p.m. PT game against the Eagles, who crushed Dallas Thursday 33-10. Seattle returns to CenturyLink Field Dec. 14 for a rematch with the 49ers.