Thiel: Seahawks deep in the heads of 49ers

In a post-gamer tweet, 49ers owner Jed York apologized for poor play. When that happens, it’s plain that the Seahawks ae deep into the 49ers’ psyches. 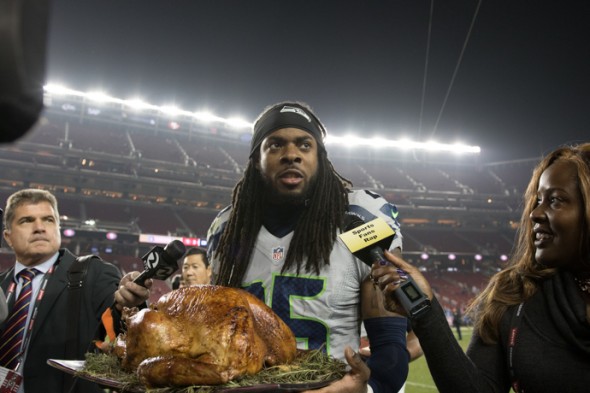 No, that isn’t Colin Kaepernick Richard Sherman is carrying, but a prop from the NBC telecast that Sherman and the Seahawks claimed with the victory in Santa Clara. / Drew McKenzie, Sportspress Northwest

It wasn’t embarrassing enough Thursday night to have many in the Levi’s Stadium crowd walk out at halftime. Nor was it sufficiently comedic to have the 49ers finish with 164 yards of total offense on Thanksgiving night national TV. So owner Jed York completed the hat trick of haplessness when he tweeted out post-game an apology to fans for the 19-3 loss to the Seattle Seahawks.

The Seahawks are so far into the heads of the Santa Clara enterprise that they need miner’s hats and safety ropes.

Thank you #49ersfaithful for coming out strong tonight. This performance wasn’t acceptable. I apologize for that

When the boss claims publicly that losing by 16 points to the defending Super Bowl champs is unacceptable, you can be fairly certain that everything you’ve been reading about how dysfunctional the 49ers are is true.

Conversely, all the stuff you were reading about the internal daffiness of the Seahawks has been overcome or dismissed. In five days, they beat their two biggest rivals in the NFC West by the identical score and have won five of their past six entering the season’s final quarter. The turnaround is resounding.

Among the defenders in particular, they nearly vibrate with energy, which is a familiar feeling.

“We joined together and really recaptured what we played with last year,” said a beaming coach Pete Carroll. “No question we’ve elevated our game. They’ve touched what it is — the special attitude, intensity and toughness that we have playing with one another.”

Beginning with a collision on the 49ers’ first pass completion that temporarily knocked WR Michael Crabtree from the game with a sore knee, the defense bullied the Niners wire to wire on their new home turf. The first Seattle win in the Bay Area since 2008 was never in real jeopardy.

Remember how the Seahawks kept saying in their early season, 3-3 trudge that sometimes the ball just bounces the other team’s way? Twice Thursday potentially damaging fumbles were recovered, including a dropped snap by punter Jon Ryan. Yet he managed to get a good kick away, and the return was fumbled back to Seattle. Another time QB Russell Wilson, who had an otherwise stellar game, lost the ball on a scramble in which he was not hit. He was switching the ball from right hand to left when his leg knocked it free.

He recovered the loose ball. The pendulum of good fortune is swinging back. Not so for the 49ers.

The game almost didn’t sell out, and the 13-0 halftime deficit drew heavy boos and prompted an early departure by many. While it’s a tad early to forecast an end to the era of coach Jim Harbaugh, the 7-5 Niners, with such a puny offensive effort, are going in the wrong direction ahead of the Dec. 14 rematch in Seattle.

It’s plain that QB Colin Kaepernick is not up to the match with Seattle’s defense. He had two picks, was sacked four times, threw for 121 yards and ran for 17. The longest SF play was 16 yards.

Sherman said that he and the Seahawks were heckled pre-game with “vulgar” taunts by 49ers fans, which apparently added to the fury. Sherman, with one pick for the season, had both of the interceptions Thursday.

“Sometimes you should let sleeping dogs lie,” he said, “otherwise you get this.”

He said the recaptured joy they found after some intense player meetings with Carroll and among themselves after a 24-20 loss in Kansas City was apparent.

“We were playing like 9- and 10-year-old kids, not worried about stats, playing for fun, playing for one another,” he said. “When we play like that, we’re hard to beat.

“When were playing division rivals, it’s kinda like brothers against brothers. We all know each others moves. It comes down to will against will.”

NBC broadcaster Chris Collingsworth, who had access to Carroll and the players this week, offered a trenchant observation.

“Pete said there’s a big difference between right and ‘not quite,'” he said. “Not only did the Seahawks get healthy, they got harmonious.”

Or, as Wilson put it, “The fight in the guys’ eyes tonight was unmatchable.”

The task needing work is the red zone offense, where the Seahawks were one for four, including a first-and-goal at the San Francisco 1-yard line that Niners turned back and forced a field goal.

Absent C Max Unger (ankle) and TE Zach Miller (ankle), the Seahawks lack a punch compared to their craftier exploits with a bigger field. Against a higher-octane offense they will face against the Eagles in Philadelphia Dec. 7, the Seahawks’ offense needs to stick sixes instead of threes.

“We could have been better in the red zone,” Wilson said. “But we’re going in the right direction. When we get it right, (defenses) don’t know who to cover, and the scramble game makes it tougher.”

Carroll closed his presser with a remark that could be interpreted as a sly shot at his longtime rival Harbaugh.

Unsolicited, he said, “Good to be back in the Bay Area.”

He is, after all, a native of San Francisco. But this was his first win on his native ground since he became Seahawks coach.

It may have been his most satisfying.