Seattle CB Richard Sherman’s celebrity usually gets more attention than his athleticism, but he has become one of the most accomplished pick artists of the Super Bowl era. 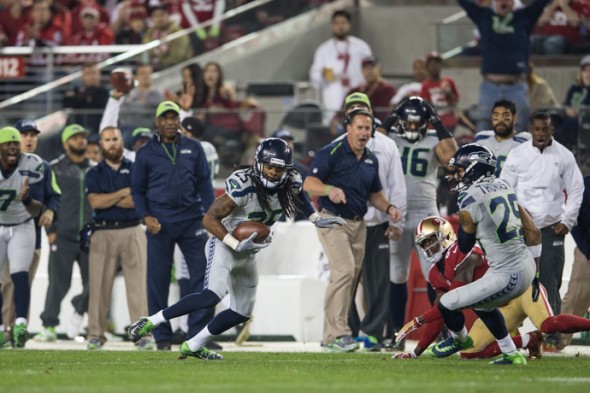 Via amusing rants, TV commercials, mock press conferences and loquacious boasting, Richard Sherman makes such a spectacle of himself that his turbo tongue – colleague Art Thiel once predicted that he’s slated to die in mid-sentence – often trumps his athleticism. Such was the case Thursday night when his preening got him more face time from the NBC cameras than his two interceptions, both of which factored heavily in the Seahawks’ 19-3 victory over San Francisco.

The first helped set up Seattle’s only touchdown and the second made it impossible for the 49ers to mount any sort of comeback. Not that Colin Kaepernick was up to such a feat, anyway. Thanks mainly to Sherman, Kaepernick played the worst game of his career, and henceforth will see Sherman in his nightmares.

Sherman’s picks were his second and third this season and the 22nd and 23rd of his four-year career. No defensive back has more since Sherman entered the NFL as a fifth-round draft choice out of Stanford in 2011 and, in fact, no DB is close. Sherman’s 23 are eight more than Chicago’s Tim Jennings (15) and nine clear of Arizona’s Patrick Peterson (14).

Sherman is also the first player in three decades — coinciding with the early Reagan Administration — to rack up that many interceptions in his first four seasons. The last two players with at least 23 picks in their first four years played simultaneously from 1981 to 1984, Everson Walls with the Dallas Cowboys (25) and safety Kenny Easley with the Seahawks (24).

Note that, in addition to two Hall of Famers (Lem Barney and Mike Haynes), three Seahawks occupy the list. Easley, a five-time Pro Bowler and three-time first-team All-Pro, probably would have made the Hall of Fame if his career (1981-87) hadn’t been derailed by injury.

Easley was this good: During the 1984 Pro Bowl, Easley, normally a strong safety, was asked if he would switch to cornerback in the second quarter. Although he’d never played the position, none of the three NFC receivers he covered, James Lofton, Art Monk and Roy Green, caught a pass.

“That guy was a stud,” Raiders TE Todd Christiansen told reporters after the game.

Harris is about as obscure as an ex-Seahawk can get even though he played eight years in Seattle after the club drafted him 173rd overall in 1978 out of Arizona State. A safety, he never made a Pro Bowl, not even in 1981 when he led the AFC with 10 interceptions. When Harris left the Seahawks in 1986 to finish his career in Minnesota, he had 41 interceptions, still No. 3 in team history.

By defeating Arizona (9-2) and San Francisco (7-5) in a five-day span, the Seahawks have temporarily taken over the No. 5 seed in the NFC (two weeks ago, they would not have made the playoffs if the postseason had started then). Seattle finishes the season against teams with a combined record of 29-17, a .630 winning percentage.

Pete Carroll made several pointed remarks Thursday night about the disparity in penalties, 14 called against the Seahawks, only three against the 49ers, and used the phrase “a widening cavern” to describe the number of flags his team sustains vs. other clubs.

The Seahawks have been hit with 102 penalties to 51 for their opponents, easily the largest disparity in the league. They are on pace for 136, which would top their league-leading 128 last year.

Since Carroll has been running the Seahawks, his teams have been hit with 579 penalties to 438 for their opponents, a difference of +141. That’s by far the largest gap in the league (Oakland 101). As the result of those flags, the Seahawks have had 4,785 yards  — practically Marshawn Lynch’s entire career — marched off against them to 3,813 for their opponents. The difference of 972 yards easily eclipses No. 2 Detroit at 727. Largest disparity in penalties since 2010:

While the gap between Seattle the rest of the league is substantial, the Seahawks don’t do a lot to help their own cause. They lead the NFL with 47 pre-snap penalties (Tampa Bay 34), and inside that number you find the Seahawks rank first in false starts (20), defensive offsides (9) and neutral-zone infractions (7), errors that needlessly subvert drives.

The Seahawks have won their last two games, at the expense of Arizona and San Francisco, by identical 19-3 scores. The only other time that the Seahawks won back-to-back games by identical scores: Nov. 25 and Dec. 2, 1990, when they defeated San Diego and Houston 13-10.