Alonso, Neagle may play Sunday as Sounders attempt to reach their first MLS Cup by getting past nemesis Galaxy in the freezing Clink. 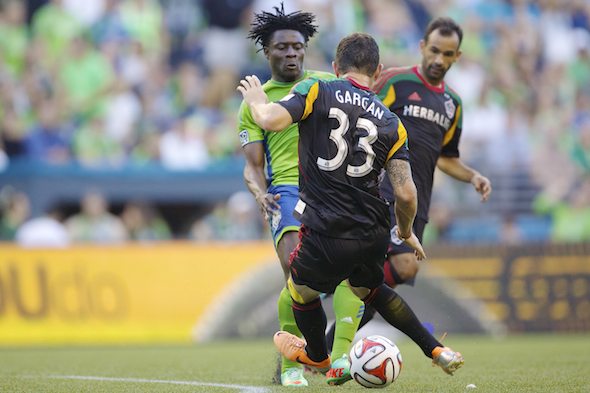 Obafemi Martins led Seattle with 17 regular-season goals, but the Sounders have managed just one goal in the playoffs. / Drew Sellers, Sportspress Northwest

When the Sounders ventured to Carson, CA., last weekend to contest the LA Galaxy in the first leg of the Western Conference finals, they had as their goal achieving one of three outcomes: A win or a tie, the desired results, or a narrow defeat, still giving them a chance to claim the series in the second leg at CenturyLink Field. Despite repeated scoring chances, the Sounders got door No. 3, losing 1-0.

“We know what we’re capable of at home. Our fans are going to be behind us. It’s going to be packed, and I think that will help spur us on.”

The winner of Sunday’s rematch (6 p.m., ESPN), to be contested in freezing weather in the Clink’s full-stadium configuration, advances to the MLS Cup Dec. 7 against the New England Revolution, which won the Eastern Conference title Saturday when it drew 2-2 at home against the New York Red Bulls to win 4-3 on aggregate. At Gillette Stadium May 11, the Sounders played their worst game of the year in a 5-0 loss to the Revs.

LA is seeking to get to the final for the third time in four years, the Sounders for the first time in franchise history. New England has not been to the Cup since 2007.

Should the Sounders move on, it would put them one win away from an unprecedented triple,  after winning the U.S. Open Cup (fourth overall) and Supporters’ Shield (first ever) during the regular season.

“We know what we have to do to win and get to the MLS Cup,” said Schmid. “We’re excited that we’re about to play at home and that our fans will give us that little extra edge.”

Marcelo Sarvas provided LA with a one-goal advantage in the first leg of the two-match aggregate series, meaning that Seattle needs to win by two or more goals in order to advance to the MLS Cup. Advancement scenario:

That will be tough to achieve, given that the Galaxy have yet to allow a goal in more than 270 minutes during the postseason.

Osvaldo Alonso (hamstring) and Lamar Neagle (personal matter) missed the first game, but Schmid earlier in the week sounded hopeful that they would be available Sunday. Both participated in practice Saturday.

“Certainly those guys help our team,” he said. “Neagle has nine goals and nine assists, so he’s someone that helps us on the offensive end. And, obviously, Ozzie is Ozzie. We hope will  both be available.”

The Galaxy controlled the ball for 60.4 percent of the match to Seattle’s 39.6, leading to a shots-on-goal disparity of 12-10 in LA’s favor.

“We gave away too much possession,” said Schmid. “We have to do a better job of having more possession than we had in the last game. That’s the most important thing for us.

“Defensively we were solid. The last three times we’ve played them we’ve been solid. We just need to do a better job of attacking. It will be important not to give up a goal. The earlier we can score a goal, the more it will shift the dynamic (Sounders are 14-1-3 when scoring first). If we execute and keep possession, I think we will be OK.”

“At least we have given ourselves a chance,” said defender Brad Evans of the one-goal deficit. “We have to bide our time and be smart. Most important, we have to play to zero.”

“We need to get goals, but at the same just keep playing the way we’re playing,” added midfielder Clint Dempsey. “We’re creating chances. We’ve just got to find the back of the net.”

The Sounders, second in MLS with 65 goals during the regular season, have scored only one goal this postseason, fewest among the remaining MLS Cup contenders.

“We need to be quicker and play forward to be dangerous with Oba (Obafemi Martins) and Clint,” said Gonzalo Pineda.

The Galaxy find themselves in the same position this year as they did in 2013. They entered leg two of the Western Conference finals with a one-goal advantage on Real Salt Lake and couldn’t protect it on the road.

“I think we learned a lot last year with the Salt Lake series,” Landon Donovan told lagalaxy.com this week. “We went there with a 1-0 lead and I think we were a little too tentative and a little too defensive and we didn’t create many chances. We need to create chances. It’s going to be a hard game Sunday. There’s no question about that.”