NT Danny Shelton, complete with a stunt maneuver, led Washington to a near-shutdown of the nation’s top-rated passing attack in a 31-13 Apple up triumph in Pullman. 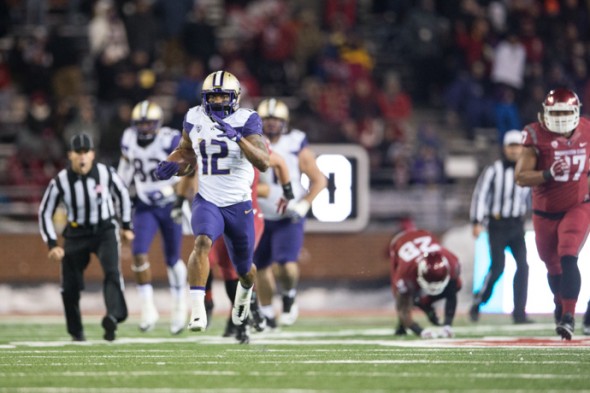 In a frozen night devoid of drama as well as mayhem — even the Washington State students could not work up much drunken belligerence — the highlight moment Saturday  at Martin Stadium in Pullman came when NT Danny Shelton unveiled a maneuver rarely seen from a 340-pounder.

In the third quarter, Shelton, an almost certain first-round choice in the NFL draft, executed a pre-snap barrel roll to his right, giving him a better angle on a pass rush in which he exploded past a blocker to sack Cougars freshman QB Luke Falk.

The stunt was one of many disruptive forays into the heart of the nation’s No. 1 passing attack that turned the 107th Apple Cup into a rout as well as a snooze. The 31-13 final score did not describe the dominance, because the Cougars’ Air Raid offense worked only in two late scoring drives against Washington reserves.

Shelton said he was egged on during practice by teammate Hau’oli Kikaha, who claimed Shelton lacked athleticism.

“He was making fun of me,” Shelton told KOMO radio. “So I practiced it, but I forgot about it in the first half. Then coach (Jeff) Choate reminded me. So I did it and made a play.”

He was given a half-sack, but his senior season has been the whole package as each week he overwhelmed offensive linemen who rarely could handle him one-on-one. In a rather tumultuous first season for new coach Chris Petersen, Shelton’s leadership and reliability was a constant.

Shelton made a pre-game statement at the team hotel when, shirtless and shoeless, he joined teammates in a courtyard playing in the falling snow. So much for the notion that the Huskies would be intimidated by the brutal weather which, by game’s end, was near zero with the wind chill.

“We had a coaching staff change, and they’ve been doing a great job of inspiring us, motivating us,” Shelton said. “I made it a goal of mine to bring a positive energy to practice and games.”

He succeeded well enough that the Huskies finished with an 8-5 record (4-5 in conference) despite an offense that stuttered for two-thirds of the season. But a bowl game will give the Huskies a chance to match the nine wins in the final year of Petersen’s predecessor, Steve Sarkisian, although the Huskies played one extra game because they opened in Hawaii.

The Huskies bowl site and opponent won’t be known until Dec. 7 after the regular season concludes nationally. But after the top four teams are selected for the first-ever national playoffs, the Huskies seem likely destined for the Cactus Bowl Jan. 2 at Sun Devil Stadium in Tempe, AZ.

The game, known previously as the Copper Bowl, the Insight.com Bowl and the Buffalo Wild Wings Bowl, is contractually tied to the team with the Pac-12’s sixth-best conference record and the No. 5 team from the Big 12 Conference. The Huskies have never played in the bowl that began in 1989. The per-team payout this year is $3.3 million.

RB Dwayne Washington scored on the game’s second scrimmage play from 51 yards and, on the second half’s second scrimmage play, from 60 yards to crush the Cougars (3-9), who never touched him on either run. Cyler Miles completed a season-high 25 passes in 39 attempts for 249 yards and two touchdowns as the Huskies ended the regular season on a high note.

“You want your team improving and on an upswing,” Petersen said. “It’s taken a while to figure out how to practice right and get their mind right for the energy of the game. We were really ready for this game; I don’t know if we felt it quite like that all season.”