How cold was Apple Cup? So cold that Cougars’ thinking was affected post-game, included one who thought 3-9 was “awesome” season. 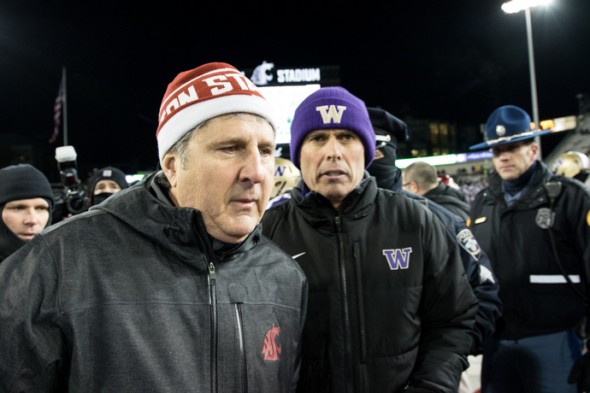 PULLMAN – The Apple Cup was played in mind-numbing cold Saturday night. Literally. That’s the only plausible explanation for some of the nonsense spewed by Washington State players after their latest train wreck of a season came to a merciful halt, courtesy of the Washington Huskies.

All of which prompted WSU senior wide receiver Isiah Myers to declare, “I don’t think we took a step back at all. We lost some players, and we’re trying to fill those positions. I feel like we had an awesome season.”

Myers seems like a nice young man, and he’s certainly a fine player. Perhaps he was a bit dazed. Some of the Cougars were hit so hard, one feared their frozen body parts would simply break off and stick to the turf until a spring thaw arrives in Pullman.

Perhaps no WSU player was more confused than LB Peyton Pelluer. He grew up a Huskies fan on Seattle’s east side, and his family is chock full of allegiances to both purple and crimson when it comes to our state’s football version of Hatfields vs. McCoys.

Pelluer said “a lack of communication” contributed to WSU breakdowns on defense during the Apple Cup. It’s difficult to argue with Pelluer, since WSU’s starting cornerbacks had polar-opposite takes on RB Dwayne Washington’s 51- and 60-yard touchdown runs on the Huskies’ second play from scrimmage in each half.

“We weren’t lined up where we were supposed to be,” Daquawn Brown said.

“We were where we were supposed to be,” Marcellus Pippins insisted, “we just didn’t execute.”

For the record, WSU coach Mike Leach sides with Pippins. For that matter – to shamelessly steal an old line – Leach is all for his players’ execution.

To be certain, something drastic needs to take place amid the rolling hills of the Palouse for WSU football to return from the dead. Sorry, last year doesn’t count. A 6-7 season capped by mental and physical collapses of epic proportions in the team’s first bowl game in 10 years does not qualify.

The Cougars are doomed as long as “awesome” includes three games with more than 50 points allowed (and two more with 40-plus points allowed). Or when they barely gain more rushing yards in one  season (478) as Oklahoma freshman Samaje Perine gained in one game (427). Or when they pass for 601 yards (at Arizona State) and lose by three touchdowns. Or when they force just eight turnovers (three interceptions, five fumbles) all season.

On Saturday, even a pregame pep talk from the great Steve Gleason was not enough to inspire the Cougars to greatness. Gleason, able to speak only through the magic of technology due to the vicious effects of ALS (Lou Gehrig’s Disease), is the former Washington State and NFL player who has inspired the world with his courageous battle against an incurable malady that has restricted him to a wheelchair.

A sellout crowd erupted, and even a few Huskies on the sideline cheered, when Gleason was wheeled onto the field between the first and second quarters after being inducted into the WSU Athletics Hall of Fame. Some very large, tough men shed some very large, wet tears.

“He made us very revved up before the game and got us going,” Brown said. “We love Steve Gleason.”

“I love Steve Gleason and what he’s about and how he’s a fighter,” Myers said.

Any coach could use a large supply of players as proud and energetic as Gleason. The Cougars have some players of similar virtues, and a host of promising young players in WSU’s starting lineup Saturday included three freshmen.

The Huskies also started three freshmen, but they were backed up by nine senior starters (it’s usually 10). The Cougars started six seniors, one of whom (little-used running back Theron West) started on Senior Night ahead of regular starter Jamal Morrow, a freshman.

Now THAT would be awesome.