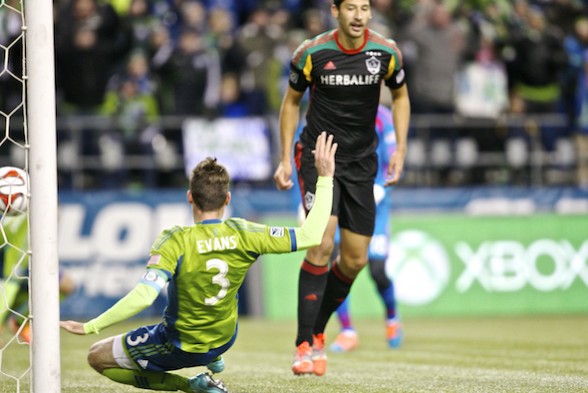 Brad Evans scored the Sounders’ first goal when he took a feed from Clint Dempsey after GK Jaime Penedo was drawn off his line. / Drew Sellers, Sportspress Northwest

At the end of the previous season, the Sounders were miles away from reaching the MLS Cup final. Sunday at the frozen Clink, they were an inch away. Makes no difference. They’re done, and done in by the usual suspects, the Los Angeles Galaxy, official nemesis of the most successful operation in U.S. soccer.

The carefully laid plan to do in 2014 the only thing the franchise had yet to accomplish, an MLS championship, went crashing after a what-the-hell shot from distance by Juninho barely grabbed enough of the near post to slither past GK Stefan Frei. It was a road goal, the debatable tiebreaker inserted by MLS for the first time this year, and enough to render moot the 2-1 match win by Seattle and a 2-2 draw in the aggregate two-game series.

“We cleared the ball initially out to the top of the box,” he said. “We were well aware they like to float around out there, especially (Robbie) Keane. In that instance, we got a little too deep and forgot about that spot.

“I don’t even know who shot, but he shoots, and there were a lot of people in front of me. I ended up seeing it a little late. One inch closer to me, and I probably have it, one inch farther and it ricochets out of the goal.

The score in the 54th minute devastated a playoff record crowd of 46,758, who knew the Sounders had to win by two goals to advance to the MLS Cup against the Eastern Conference champion New England Revolution. Instead, the Galaxy will play on, pursuing their “Drive for Five,” the slogan for a league-record fifth crown.

Cold as it was at kickoff — the 31 degrees was a record low for a Sounders game by eight degrees — conditions were frostier at the end because it was another elimination by the star-filled Galaxy, who were awarded the Western Conference trophy on Seattle’s turf, accompanied by made-for-TV fireworks. The celebration drew boos, but even the departing fans couldn’t sustain long their contempt.

Brad Evans, who scored the first goal in the 26th minute from point-blank range into an open net after a feed from Clint Dempsey, was asked about a common theme.

“The common theme is a very good team, well coached, all veteran players with one young guy out there — almost identical to our team,” he said. “It’s always a good battle. The reality is they’ve got our number. We’ve got to do our best to change that, buck that trend. We go into the offseason saying, “What do we have to do to beat these guys?'”

For yet another offseason, that is the chore. Sounders bosses thought they solved for it with the hires of Dempsey and Obafemi Martins, then the hire of Chad Marshall, the 2014 MLS defender of the year. But no.

It sounded as if coach Sigi Schmid was having a hard time accepting that.

“I think these two teams are equal; I think the aggregate score reflects that,” he said. “I thought we were a little bit unlucky today, and my heart goes out to our fans and our team because I think they’ve battled and done really well this season, and deserve to go to the MLS Cup Final. But that’s not the way it turned out.”

Despite the winning goal being so unlikely, the Sounders actually lost the series the previous game in Carson, CA., when they couldn’t score a coveted road goal — the same tiebreaker that got them past Dallas FC in the playoffs’ first round. So Sounders fans, please check your grousing about Sunday’s tiebreaker loss.

The series was also lost in the first half Sunday, when the two first-half goals — the second in the 32nd minute by Dempsey — were also followed by two near-scores, either of which would have provided a 3-0 lead. That failure left the Sounders vulnerable to a single fluke. Once the Galaxy scored, they could fall back to squatting in the box.

“The first goal gives us a good boost, then we get a second,” said Evans, “then they come out and get a ball that gets through everybody and hits the wrong side of the post for us. At that point, we’re chasing.”

The Galaxy is too experienced to be chased down. Instead, the Sounders were chased out of the playoffs for a sixth consecutive season despite having the most talent and resources.

After earlier winning the U.S. Open Cup and the Supporters’ Shield, the failure to become the first team to take all three in a single season generated anguish in Schmid that was plain.

“There’s nothing I want to do more than bring an MLS Cup to the city of Seattle because the fans deserve it; their support has been phenomenal,” he said, eyes watering. “You heard them even after the game.

“There’s always going to be people who say, ‘You need a new coach,’ ‘get rid of this guy,’ ‘someone else is a better fit.’ That’s just part of business. You hear that all the time. For me, I want to win a championship here, I want to win an MLS Cup. We’re a team that won five trophies in six years. There aren’t a lot of clubs who have won five trophies in six years in this league.”

Yet after a valiant and largely successful season, Schmid is left as a kindred spirit to Capt. Ahab.

The Galaxy is 6-5-5 all time against the Sounders, and in Seattle, including the post-season, is 4-5-2. The teams were was 2-2-1 this season . . . Osvaldo Alonso (hamstring) and Lamar Neagle (personal matter), both of whom missed the first game in LA, were back in the starting lineup, and both were subbed out in the second half . . . Evans’ goal was Seattle’s first in 241 playoff minutes . . . Galaxy and U.S. star Landon Donovan is assured of playing his final game before retirement in a championship setting . . . Seattle is 12-2-3 against MLS opponents with crowds of more than 40,000.