After being outwitted by Oakland and KC, the Mariners hope Cruz fixes the long problem at DH (how was that possible?) and their longer problem of missing the playoffs. 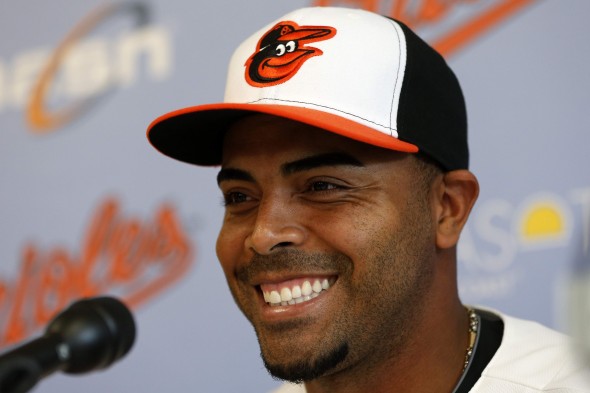 Mortification nearly complete, the Mariners are throwing money the way tourists on ferries throw French fries to seagulls. Nobody cares if fried fat kills the birds, or fills the deck with poop. It’s fun!

In order to succeed, Major League Baseball is supposed to be fun. CEO Howard Lincoln obviously, finally, gets that. His priority of a business run properly has been marginalized.

For those scoring at home, that’s a total commitment of $572 million. Half a bill, as we say in the venture capital world. All going into investments that likely will decline most years in production per unit, instead of increase.

But, again, this is about fun, not business.

For 12 years, baseball fun in Seattle has been negligible. In 2014, intrigue developed. But the Kansas City Royals, of all teams, outsmarted the Mariners for a postseason spot.

Then the Royals went on to become the sports darlings of 2014 with two sparkling playoff series triumphs. They reached the seventh game of the World Series before succumbing to one of the greatest pitching performances in MLB postseason history.

It was not difficult for any Mariners owner, executive or fan to imagine Seattle celebrating just as hard as did the KC marketplace after ending its 29-year postseason drought. Yet despite a 16-game improvement unseen by any preseason pundit, the Mariners’ 87 wins were still not enough to catch Oakland (88) and the Royals (89), who beat the A’s in the wild-card play-in.

That’s where the mortification sets in. In the time since the Mariners last made the playoffs in 2001, the low-rent A’s have done it six times. Then the even lower-rent Royals leapfrogged both in September.

Both teams have done a consistently better job in developing talent than the Mariners. The Moneyball, data-driven decisions made by the A’s Billy Beane, you know about. But the lesser-known story of Royals GM Dayton Moore is no less remarkable.

Taking over a disheveled organization in 2006 after coming over from the Atlanta Braves, Moore and his scouts piled up good draft after good draft. By 2009, all of the major homegrown players we saw in the World Series were in the organization. It took trades of quality players such as Zach Greinke, Wil Myers and Jake Odorizzi to fill some holes. The long process meant losing records through 2012 for Moore, who begged for, and received, patience from ownership.

In 2013, the Royals had only their second winning season (86-76) in 20 years. By 2014, they were the envy of the industry. In its annual awards, Baseball America magazine named the Royals its organization of the year.

The Mariners? They may win Chase Bank’s 2015 ATM of the Year.

Which is not to say I think hiring Cruz is a bad idea, even if he will be 35 in July and 39 when his deal is up.

The Mariners, outwitted again by the smaller-budget A’s and Royals, have been desperate for years now; Seager is the first homegrown position player to be an All-Star since Alex Rodriguez was plundering sorority row at the University of Washington.

Lincoln has run out of time to do what he promised to do in a 2012 interview: Turn things around before he retires/sells. Many fans long ago ran out of patience, yet the uptick last summer increased attendance by more than 250,000.

The easiest position in baseball to fill, the one Edgar Martinez handled so well from 1995-2004 that MLB named the annual DH award for him, has been a Seattle nightmare on a par with Mercer Street.

Since Martinez’s retirement, USSMariner.com pointed out the Seattle DH has been the game’s least productive. Over 10 years, Boston, primarily with David Ortiz, had a cumulative 32 WAR. The Mariners were last at -11.7 WAR. That span is nearly as improbable as comprehending distances between galaxies.

How that futility came to sustain itself is mind-numbing, and a symbol of the club’s many personnel failures. But the Mariners solved it for 2015 the best (only?) way they know how — throwing money. And their first-round draft pick in 2015, at 19 now.

The riches that come from owning its regional sports network mean that Cruz’s $14M average annual salary is affordable, even with paying Cano, Hernandez and Seager. As always with these big, long-term contracts, the question is what happens down the road when Cruz and Cano, who turned 32 in October, enter their baseball dotage.

But after 13 seasons lost in the baseball wilderness, it apparently does not matter to the Mariners. They have been outsmarted by their lessers in Oakland and Kansas City, and outshined by brethren in Seattle, the Seahawks.

The Mariners shall feed the beast now, and let someone else worry about where the seagulls went.